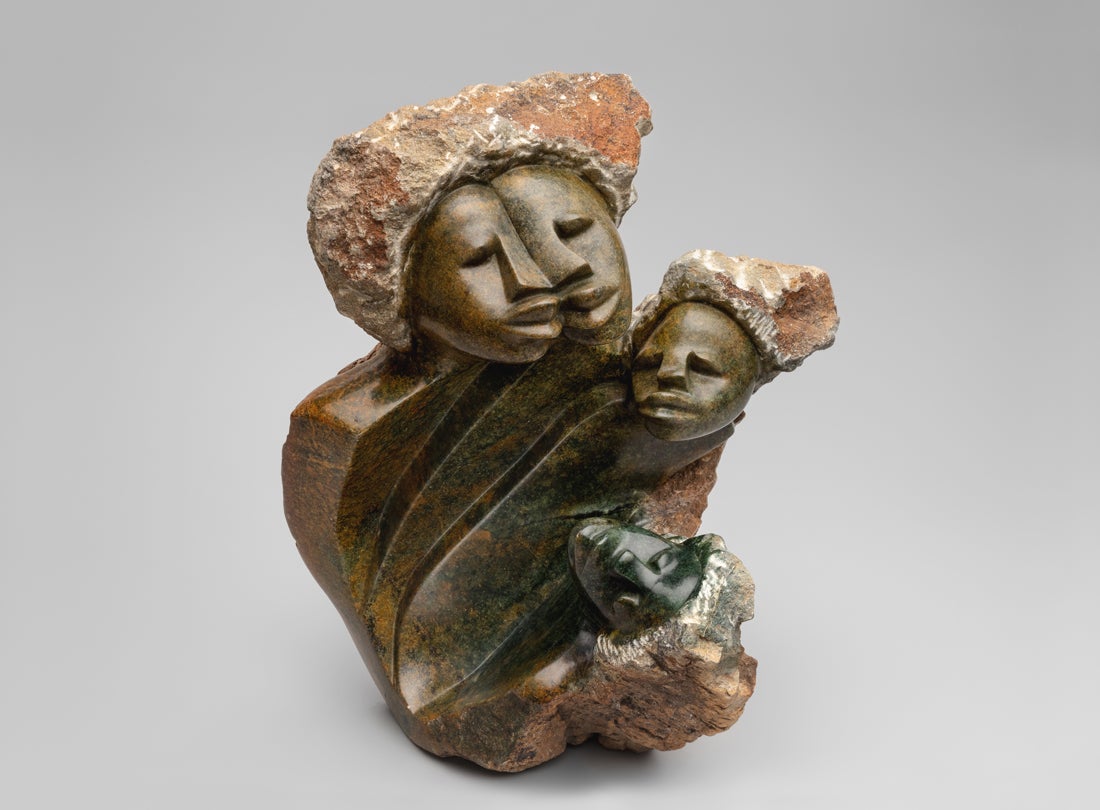 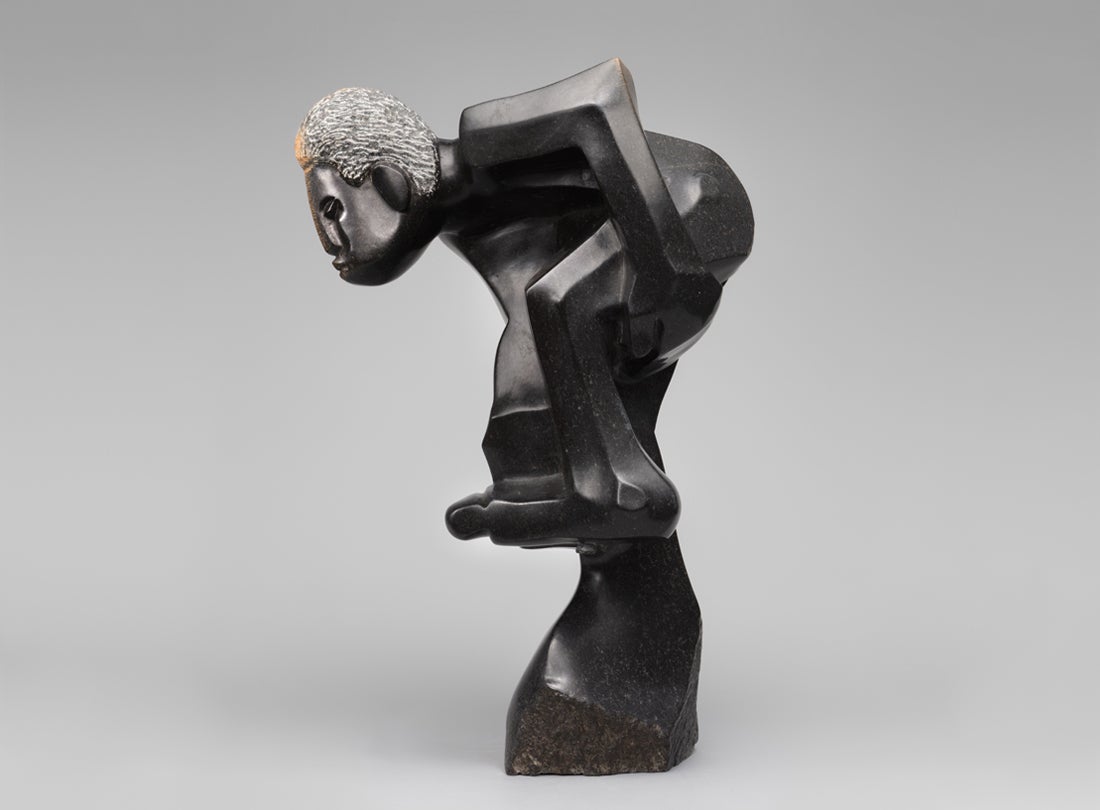 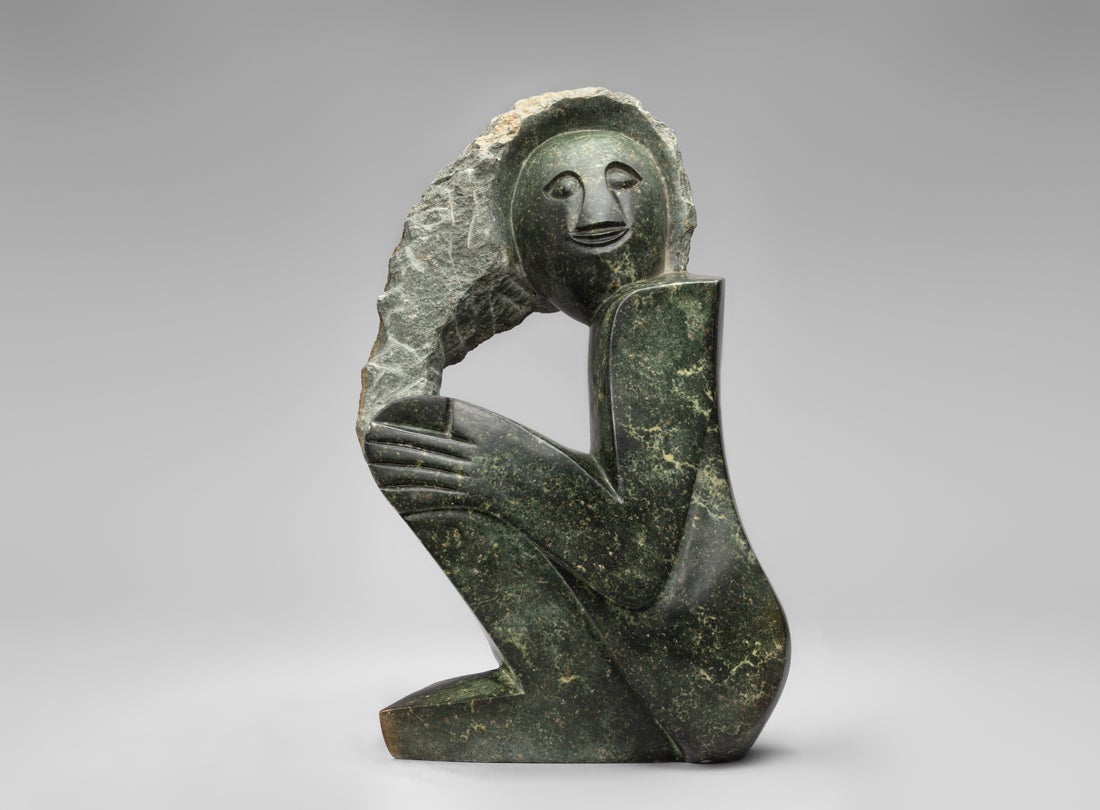 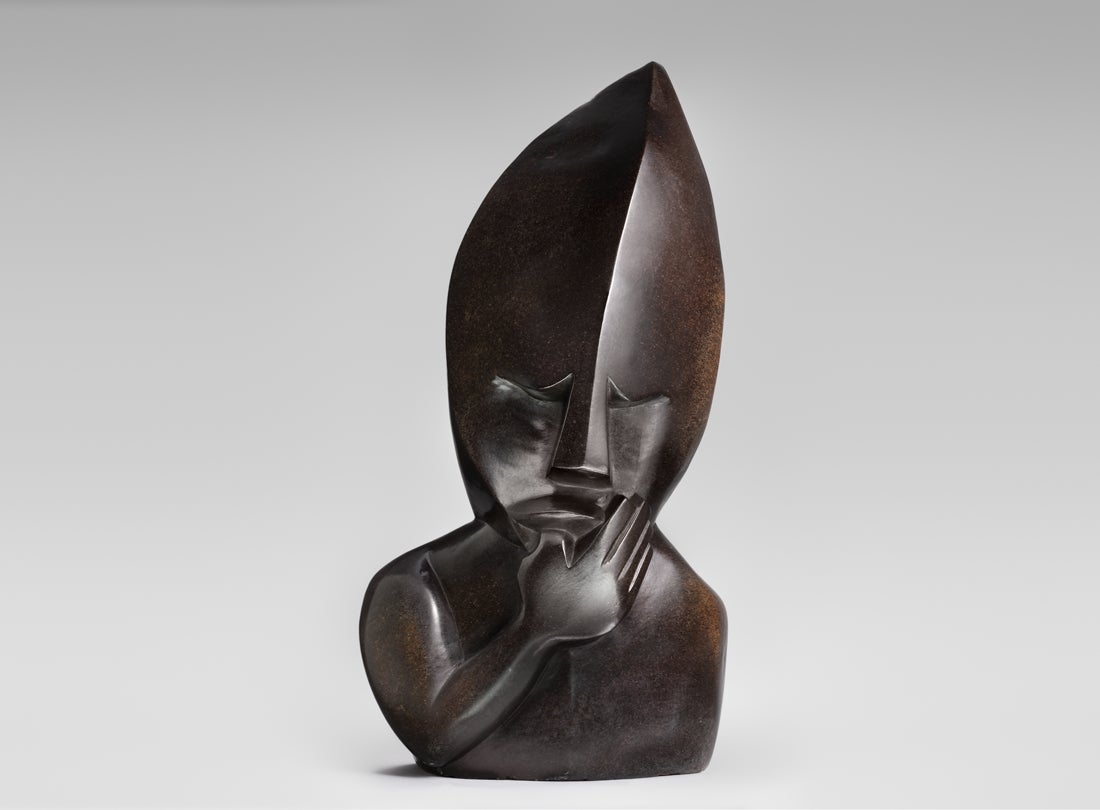 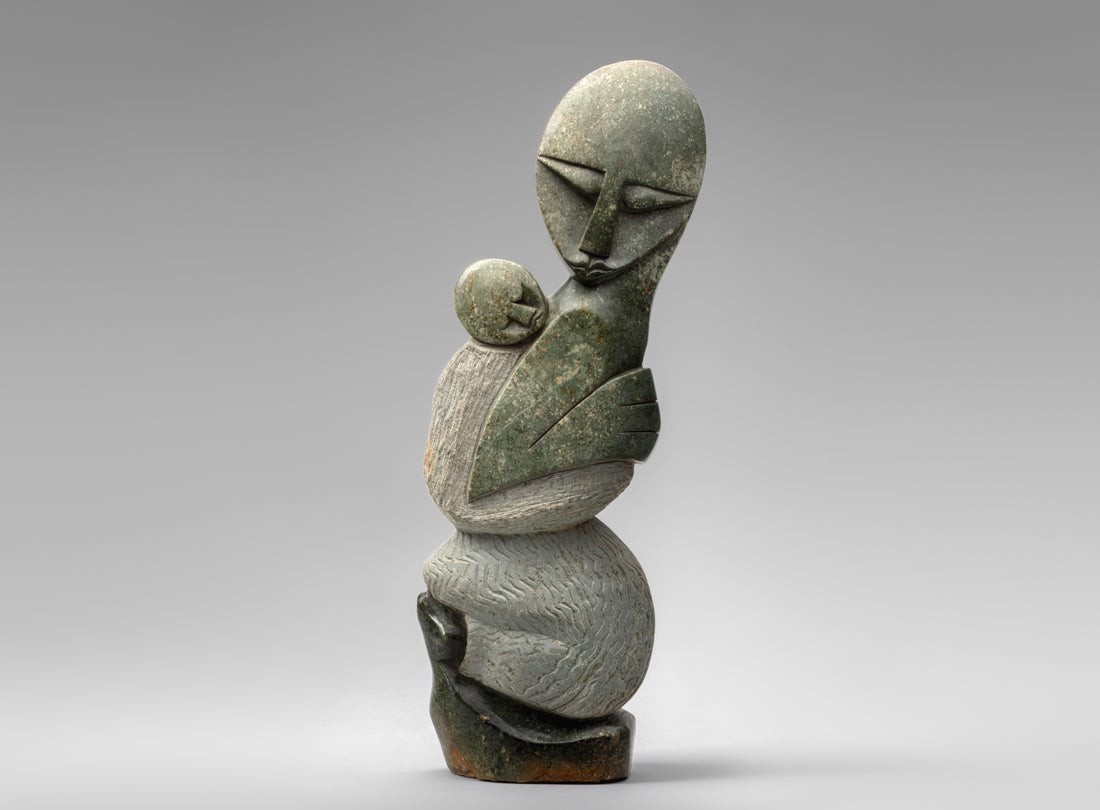 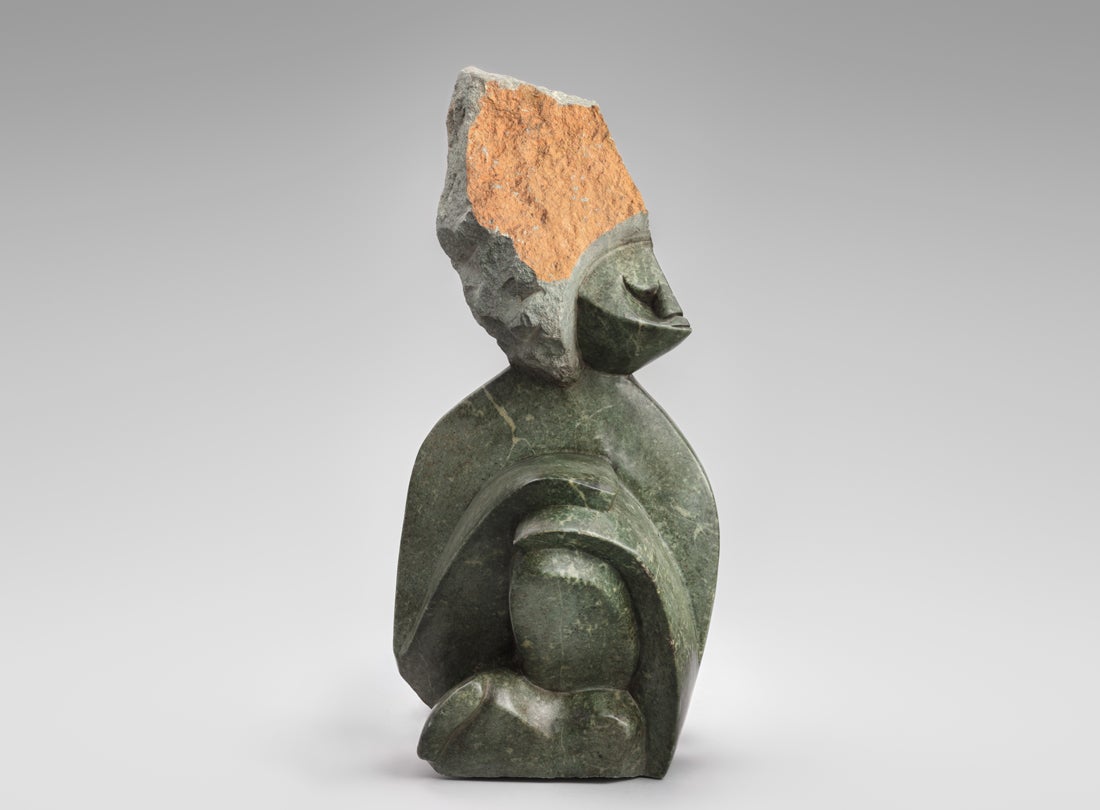 The Sculpting Process
An artist first locates a stone and excavates it before sketching the rough shape in charcoal. The sculptor then begins to chip away at the stone using a chisel and hammer. Depending on the size and hardness of the stone, this may take weeks or months. The artist carves the finer details with smaller hand tools and uses a rasp to smooth the sculpture, followed by finer sandpaper. The stone is then washed smooth and heated by either open flames or a blow torch. This process begins to reveal the stone’s natural color, from emerald green to ebony. Heating the stone also prepares its porous surface for waxing. While still hot, the sculpture is polished with beeswax or carnauba plant wax. Several layers of wax are applied as the sculpture gradually cools. Once cooled, the sculpture’s waxed surface is hand buffed with rags until it displays its rich color and high sheen. For the sculpture displayed here, the artist chose to leave the crown and base unpolished, creating a striking range of colors and surface textures. 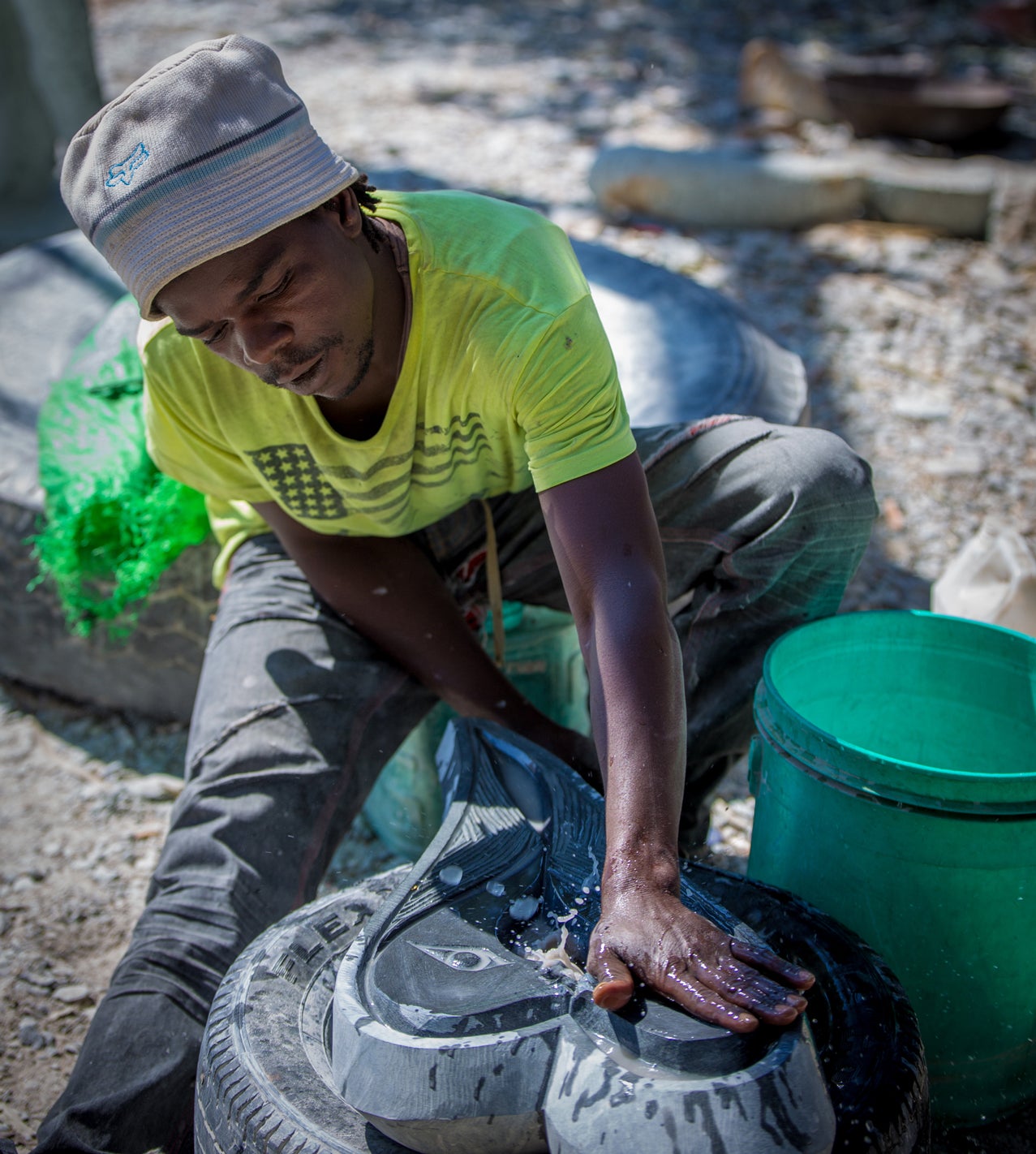 Types of Stone
Zimbabwean artists carve their sculptures from the indigenous stone that permeates the country and exhibits an array of hues. Some of this stone comes from the Great Dyke, a 2.5-billion-year-old linear geological feature of metal-bearing rock that spans the center of Zimbabwe. Many of the sculptures in this exhibition are made from one of two locally sourced stones—opal stone or springstone. Opal stone is a softer, milky-light-green or brownish serpentine with a fine, smooth texture and nearly translucent surface that may be speckled with other colors. Sculptors enjoy using it because it is not as hard as springstone and polishes to a high sheen with a rich coloring and texture. Springstone, on the other hand, is one of the hardest serpentine stones used in carving. Although found in several areas, springstone is commonly mined in the Guruve District. This dark stone also displays a high sheen when polished. 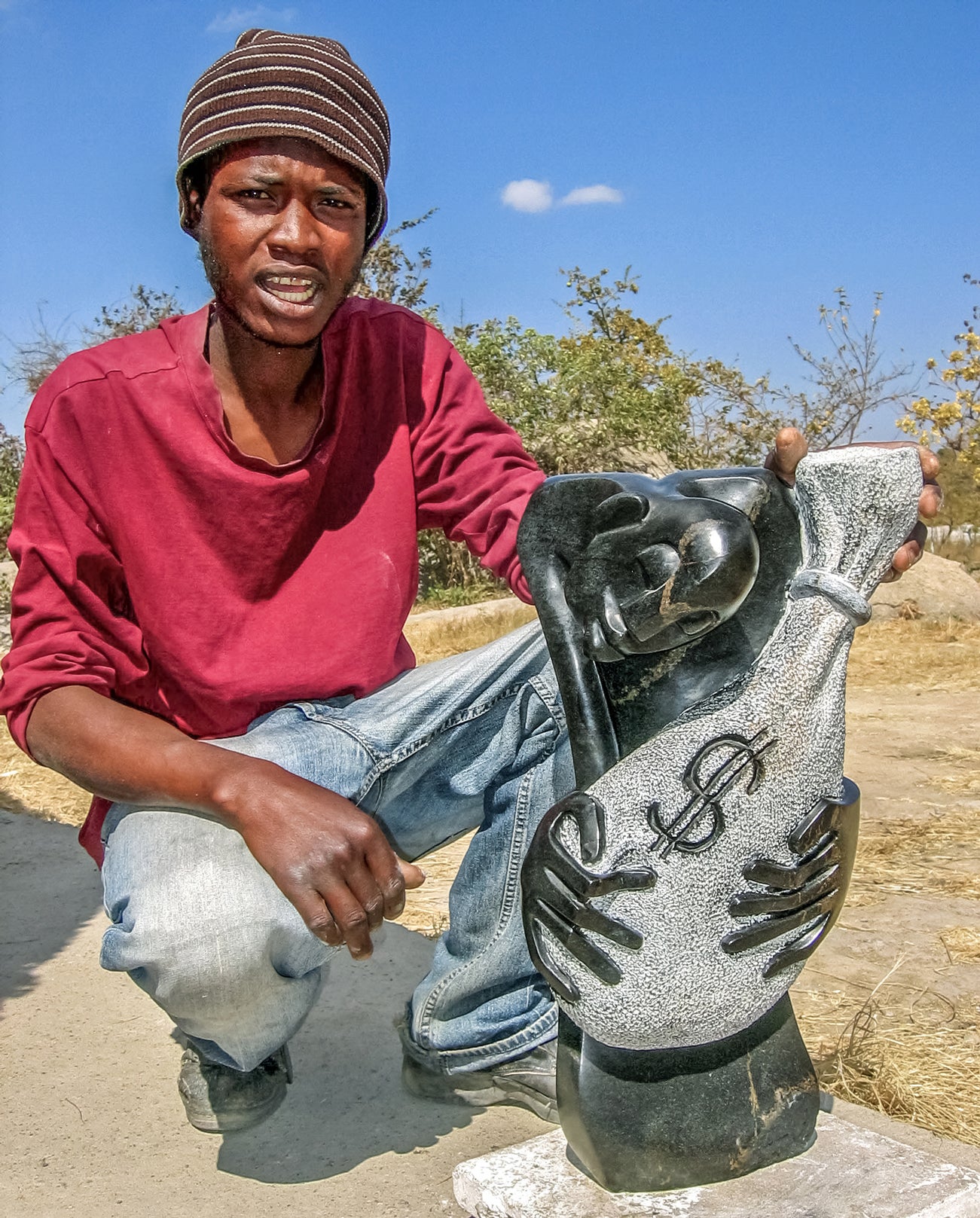 [image]
Melody Fombe with one of his sculptures  2008
Chitungwiza, Zimbabwe
Courtesy of Masvingo Sculptures
R2021.1803.003

Pheoleen Gandari
Pheoleen Gandari’s (b. 1979) interest in art began during grade school at Zengeza in Chitungwiza, a township in Harare. While in school, Gandari was inspired to carve stone by Newman Chikuni (b. 1956), a senior artist at the Chitungwiza Arts Centre whose work has been featured at the National Gallery in Harare. Gandari began assisting Chikuni on the weekends and was soon creating his own sculpture. Gandari shared a workshop with a fellow artist until joining the Chitungwiza Art Centre in 2001. Gandari tries to capture the emotion associated with daily life and events. His work appears in collections around the world, including UNESCO, where his sculpture is part of the United Nations Art Collection. In his sculpture, Kneeling Woman, Gandari skillfully leaves the hair unpolished to create a beautiful texture that contrasts with the body’s rich green sheen. 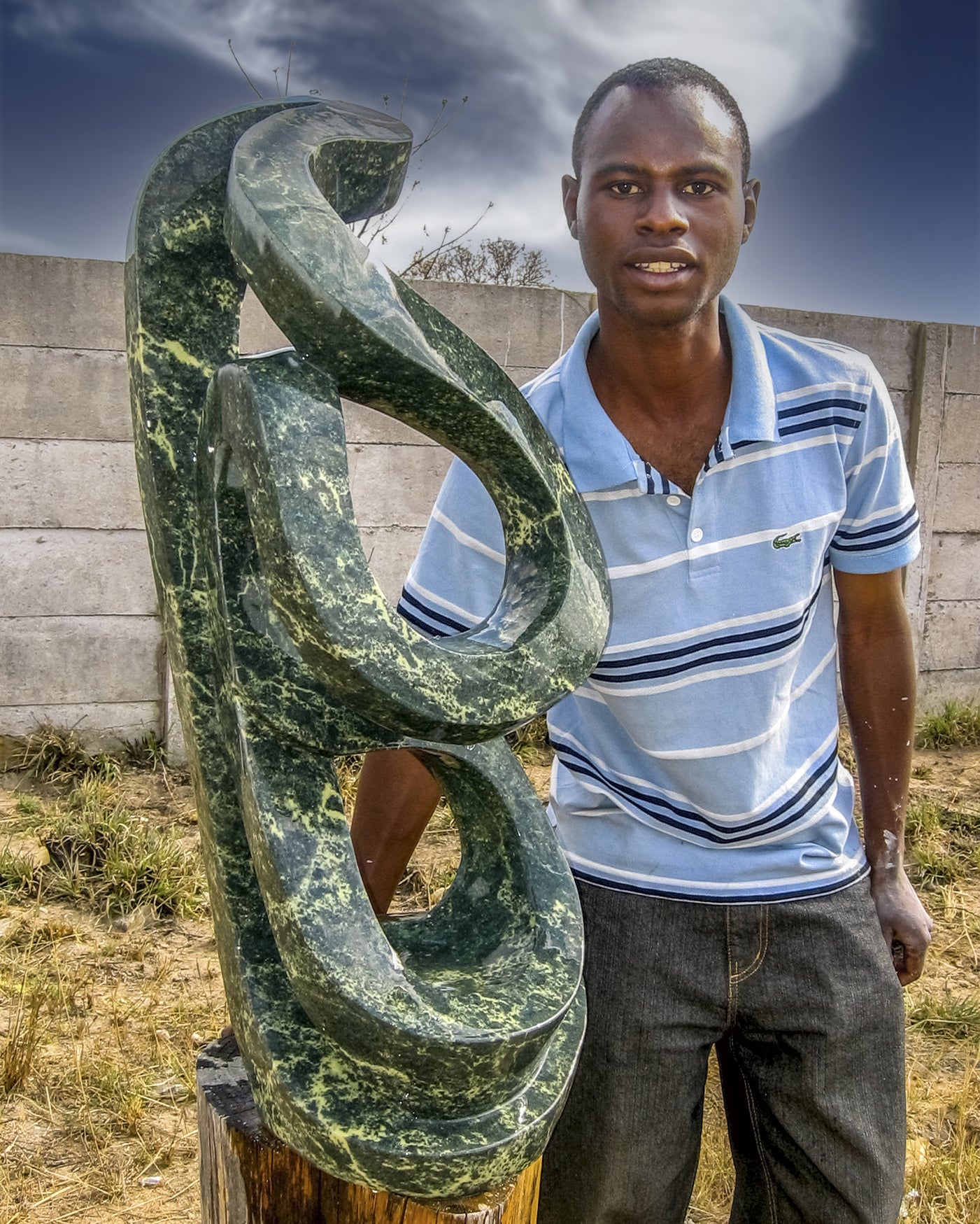 [image]
Pheoleen Gandari with one of his sculptures  2008
Chitungwiza, Zimbabwe
Courtesy of Masvingo Sculptures
R2021.1803.004

Wonder Mazhindu
Born in Harare, Shona sculptor Wonder Mazhindu (b. 1982) learned to carve from his brother Picket Mazhindu Bumhira (b. 1968). After completing his education in 1999, he focused on stone carving and developed a distinctive style. Mazhindu enjoys working with harder types of stone, such as soapstone. He explains, “I am proud to be a Shona and that the art movement is enlightening the world on our myths and beliefs. The carving movement has grown to where we are now into the fifth generation of carvers…I am willing to teach others to carve. You [must] be very disciplined and love hard work and art. I never thought I would be an artist, but it is in our family. I believe I was born poor, but rich in mind, and I love my chosen path.” Mazhindu’s work has been exhibited in Germany, the United States, the Netherlands, the United Kingdom, China, South Korea, and Australia. [image]
Wonder Mazhindu with one of his sculptures  2008
Harare, Zimbabwe
Courtesy of Masvingo Sculptures
R2021.1803.009

Sculpture of Harare
Many of the artists whose work is featured in this exhibition live and work in the modern city of Harare (formerly Salisbury), the capital of Zimbabwe. Founded in 1890, more than two million people live in metropolitan Harare, which is in the northeastern part of the country. The city’s commercial hub is home to the National Gallery of Zimbabwe. Established in 1957, the National Gallery was the first center to encourage stone carving under the directorship of Frank McEwen (1907–94) and includes a sculpture garden that features the work of first-generation and contemporary carvers. Another important center for stone sculpture, Chapungu Sculpture Park, was established in the 1970s just outside of Harare. Its year-long, artist-in-residency program commenced in the mid-1980s and provides tools and materials for sculptors to work in a supportive environment. In 2007, Chapungu Sculpture Park opened a North American counterpart in Loveland, Colorado, which also supports an artist-in-residency program. [image]
Tapiwa Jiri with one of his sculptures  2008
Chitungwiza, Zimbabwe
Courtesy of Masvingo Sculptures
R2021.1803.007

Zimbabwe
Zimbabwe (formerly Rhodesia) gained its independence from the United Kingdom in 1980 following decades of conflict between minority White rule and majority Black opposition movements. Much of Zimbabwe, a landlocked country that is slightly smaller than California, is located on a plateau in southeastern Africa. The primary languages spoken by its approximately fifteen million inhabitants include English, Shona, and Ndebele. The country boasts a tropical climate with a rainy and dry season. Some of its top exports include gems, precious metals, nickel, and sugar. Zimbabwe serves as a gateway to Victoria Falls, the world’s largest waterfall and one of seven natural world wonders. The country’s largest wildlife sanctuary, Hwange National Park, includes a myriad of species, including one of the largest elephant populations in Africa. Its greatest archeological ruins include the medieval city of Great Zimbabwe, built entirely from stone beginning in the eleventh century. Now a World Heritage site, extensive stone structures once sheltered thousands of inhabitants. 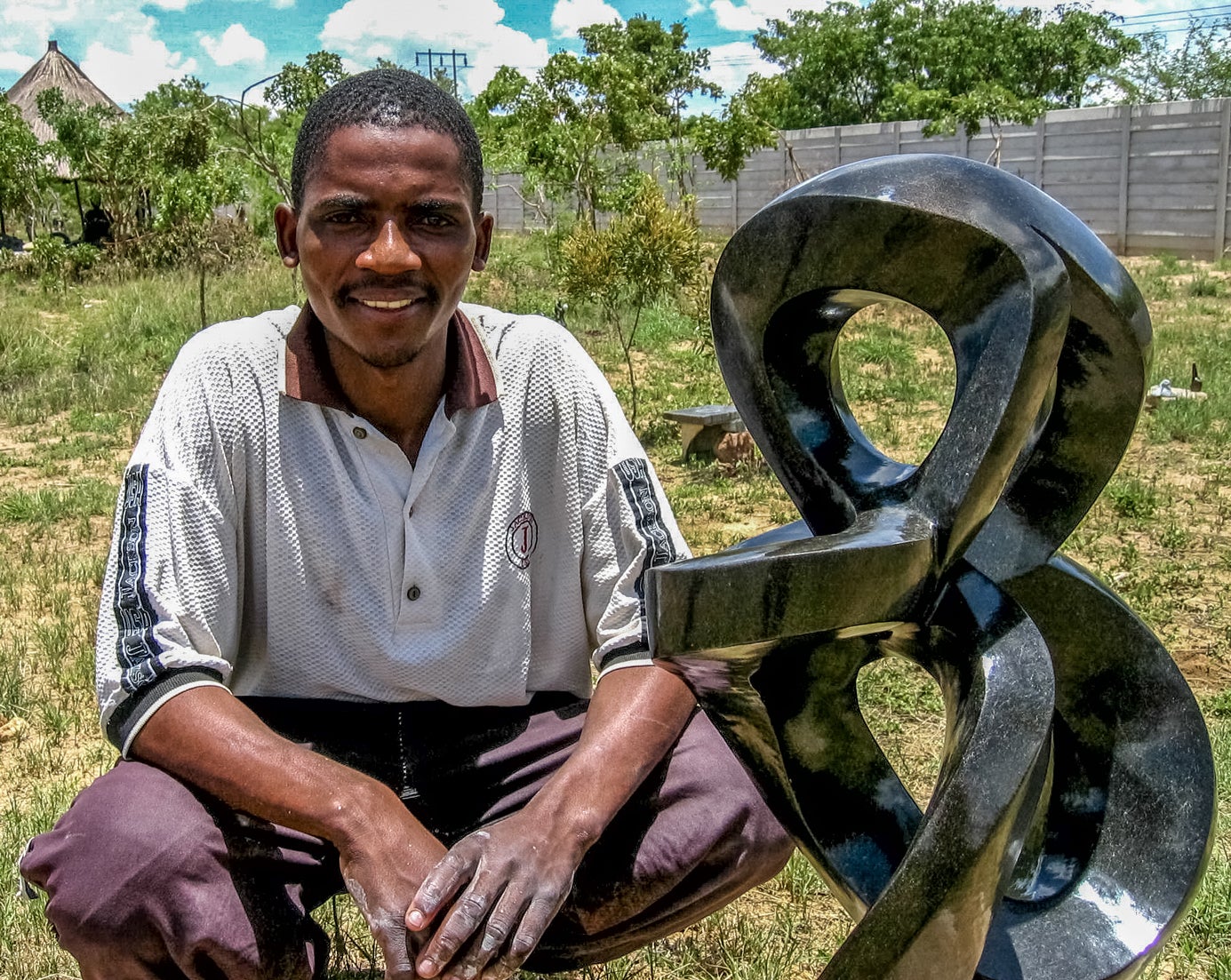 [image]
Nesbert Mhute beside one of his sculptures  2008
Chitungwiza, Zimbabwe
Courtesy of Masvingo Sculptures
R2021.1803.010 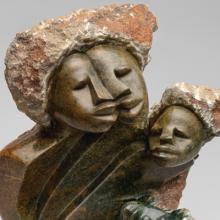 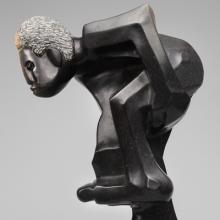 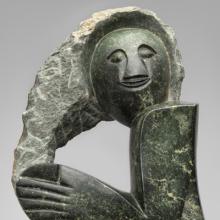 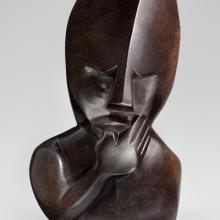 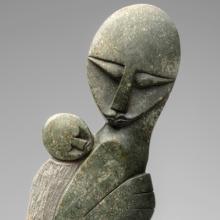 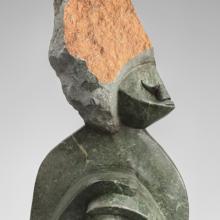