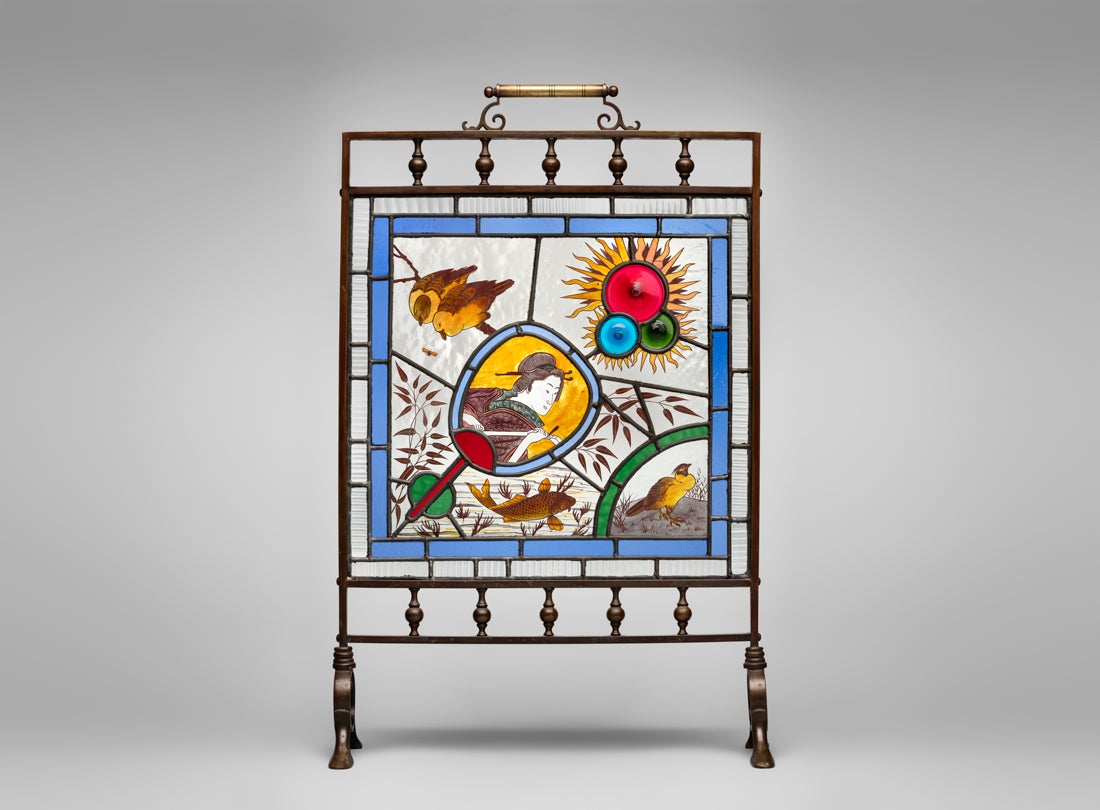 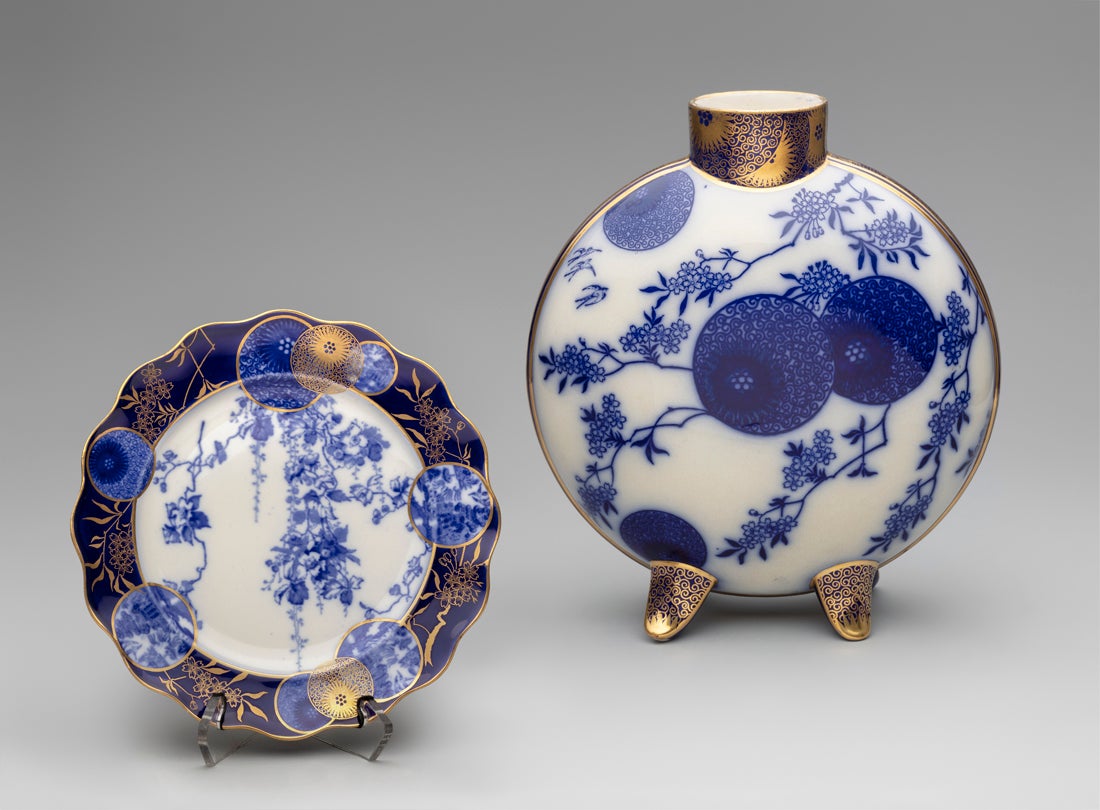 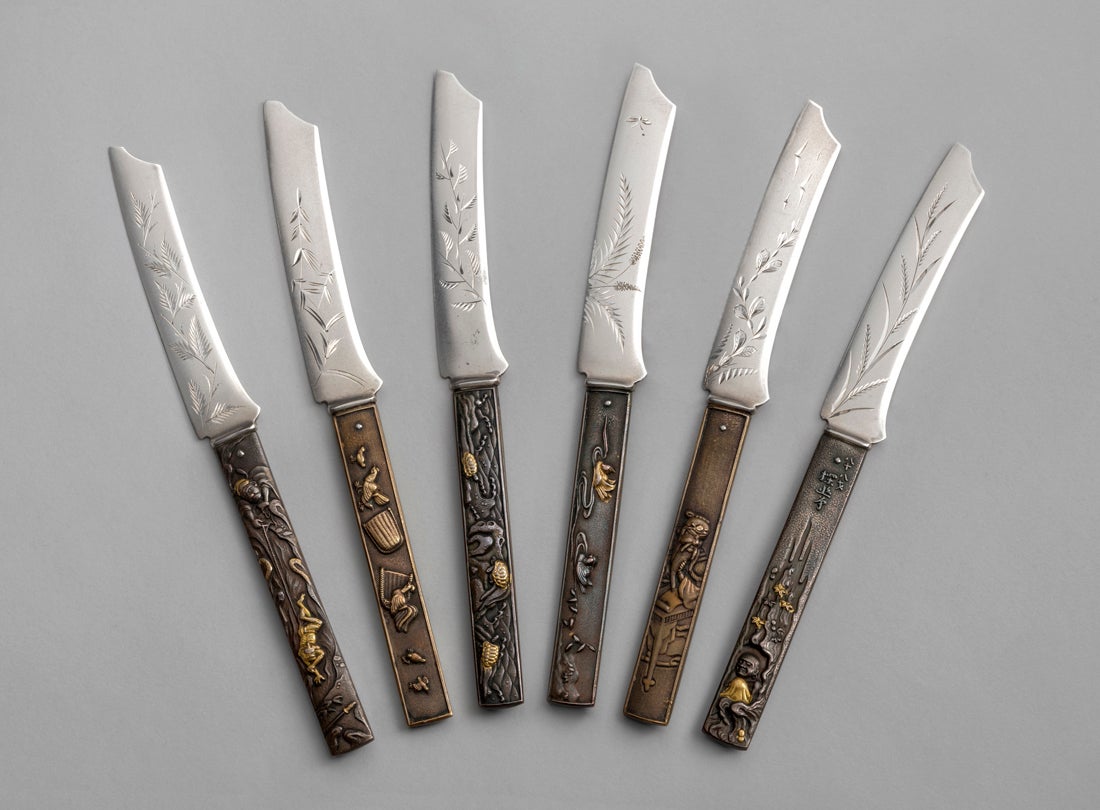 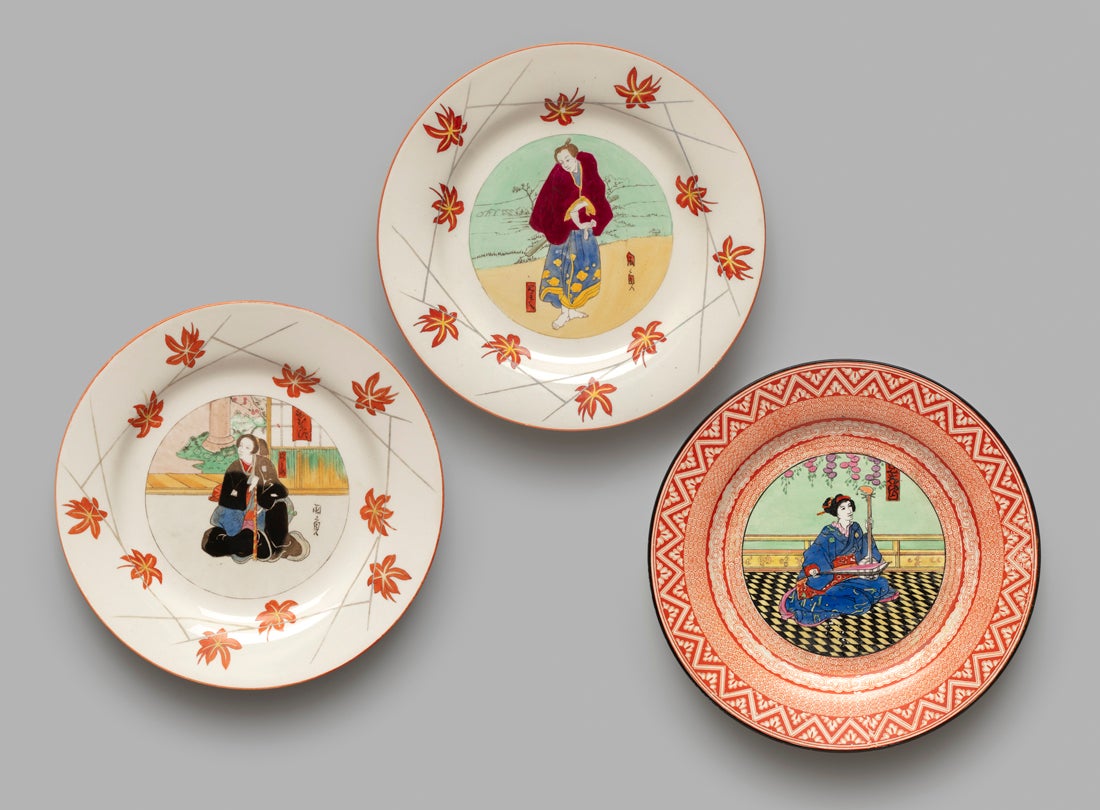 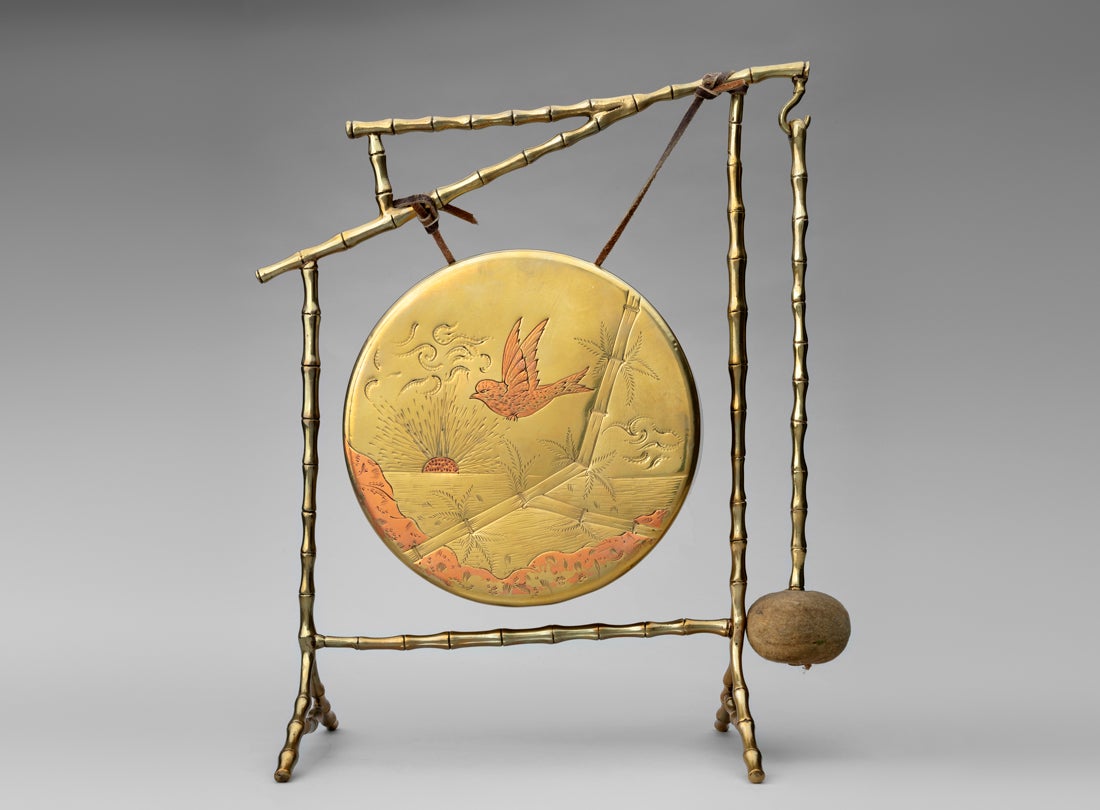 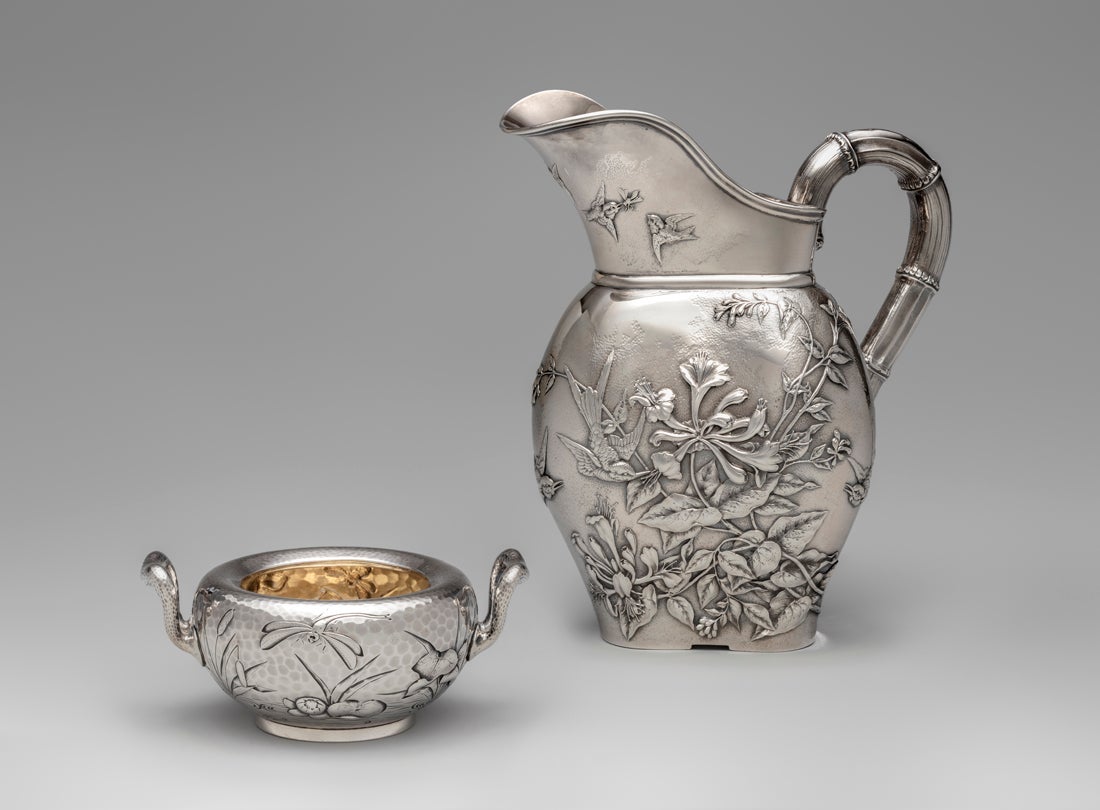 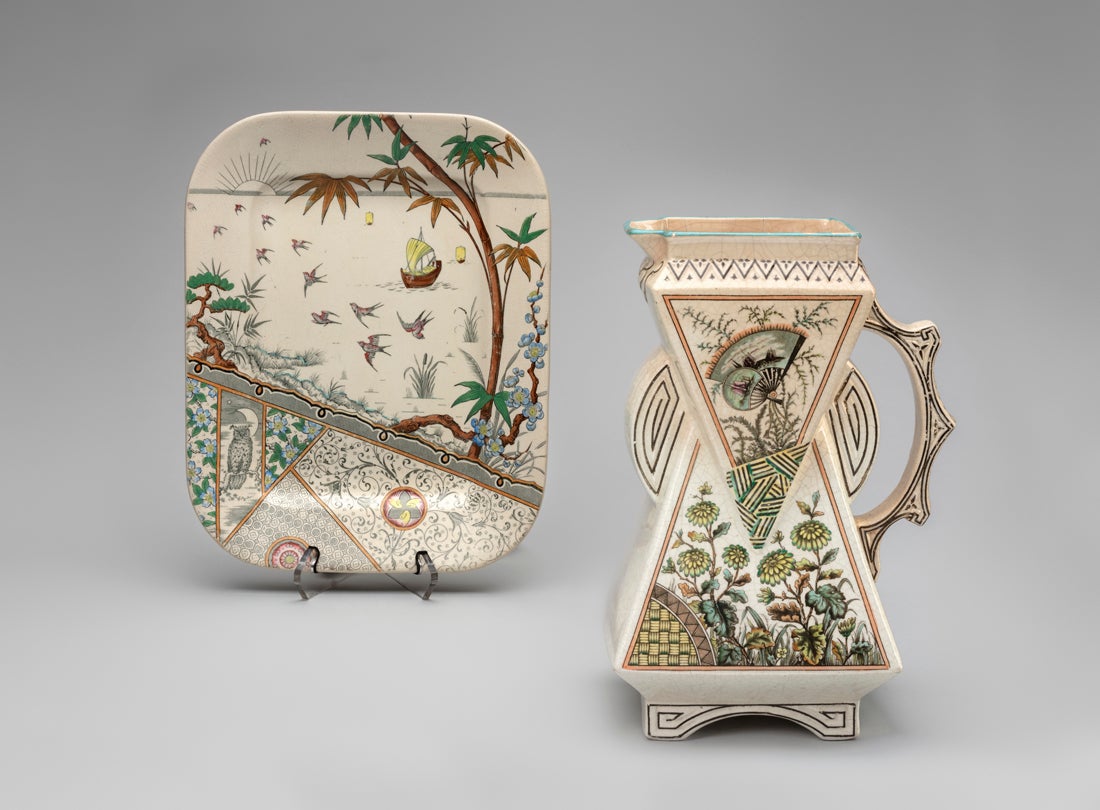 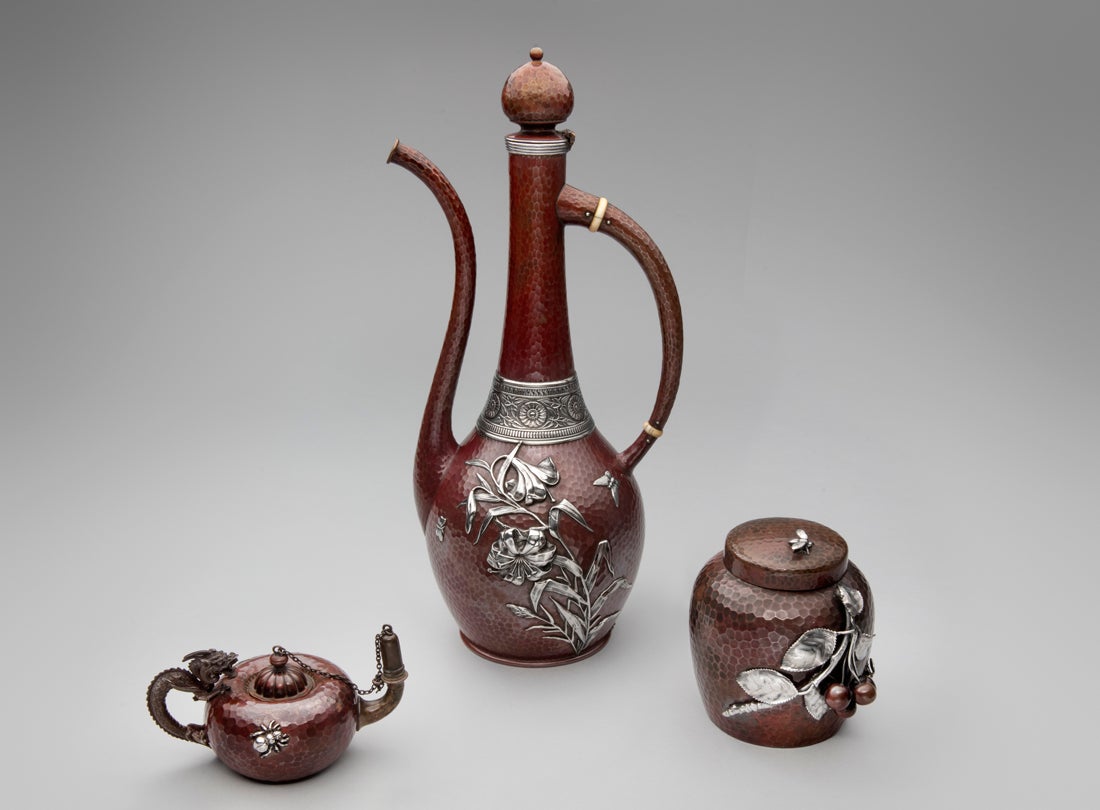 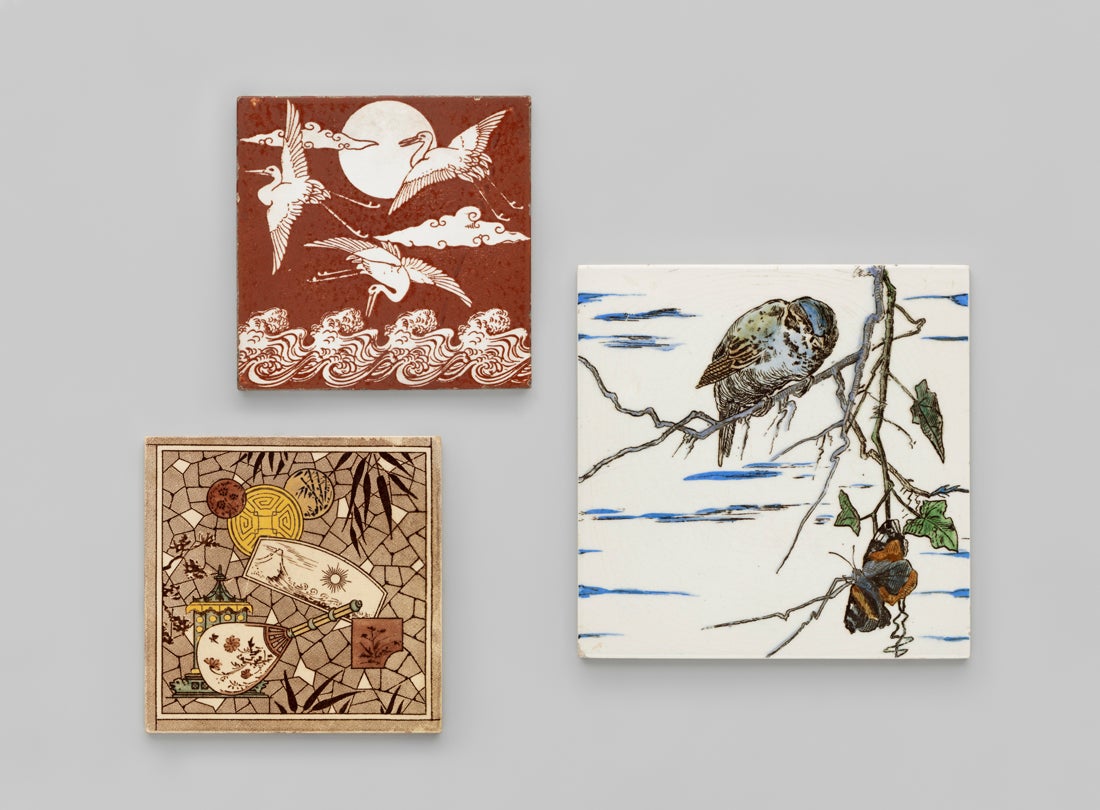 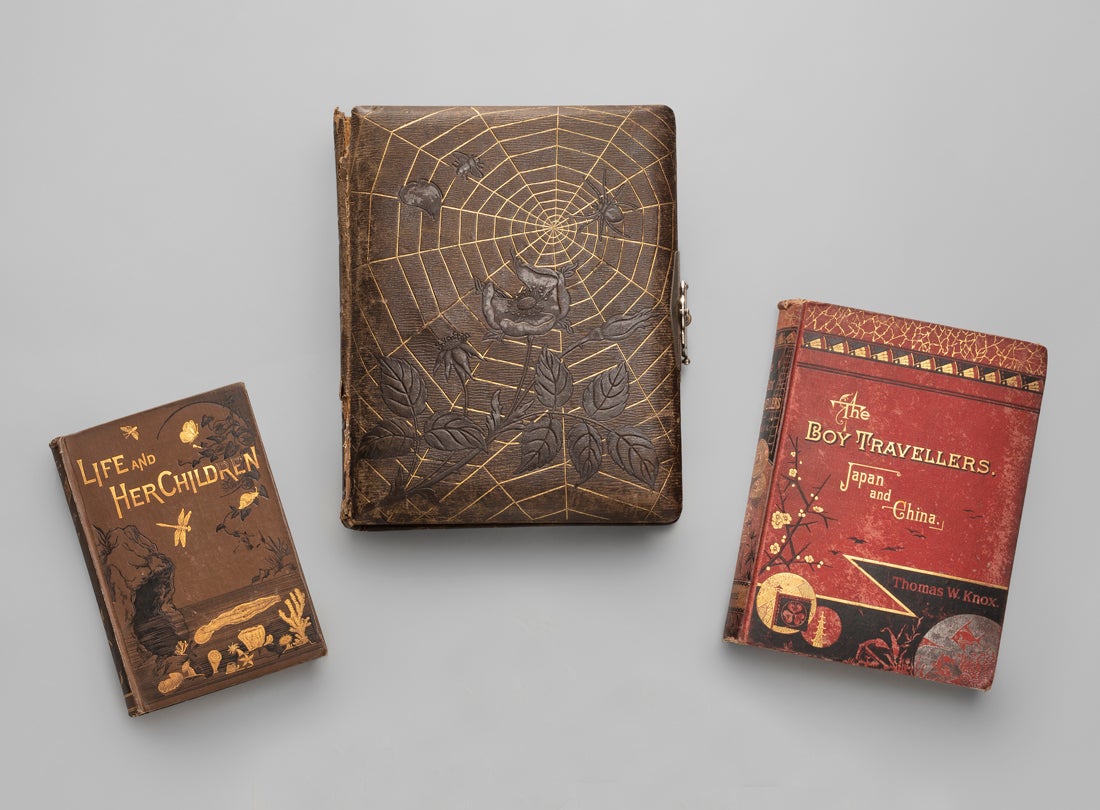 During the 1870s, stores specializing in Japanese art and merchandise, commonly referred to as Japanese novelty stores or fancy goods stores, opened across the United States—from New York and Boston to Philadelphia, Houston, and San Francisco. Many of the stores were owned by Japanese entrepreneurs. Art historian and print collector Hiromichi Shugio (1853–1927), was born into a privileged family in Saga Prefecture. He arrived in New York around 1880 and became the proprietor of First Japan Manufacturing and Trading Company in New York. Shugio curated the first major American exhibition of ukiyo-e prints at the Grolier Club in New York City in 1889. Bunkio Matsuki (1867–1940) came to San Francisco in 1888, soon moving to Salem, Massachusetts, where he established a Japanese section in the city’s leading department store, Almy, Bigelow & Washburn, stocking more than twenty-thousand items. Matsuki also opened a store in Boston and supplied works of art to the Museum of Fine Arts, Boston. Tadamasa Hayashi (1853–1906) learned French in his native country of Japan before travelling to Paris in 1878 to serve as a translator at the Exposition Universelle. Hayashi decided to remain in Paris and became a highly regarded art dealer, selling ukiyo-e and other artworks to an international clientele.

Dominick & Haff, based in New York City, produced some of the most magnificent silver objects during the late nineteenth century. The “outer” layer of this footed dish displays hexagonal hammering that appears torn away to reveal differing patterns beneath. Multi-colored gold butterflies and foliage accent the piece.

This plate features hanging wisteria. A symbol of longevity (fuji, 藤), wisteria has been grown for thousands of years in Japan. The motif often appears on kimono and many forms of Japanese art.

Royal Doulton, which was founded in 1815, produced this “Spray” pattern in the 1880s, likely inspired by Japanese mon (紋). Mon are decorative crests traditionally used to identify a Japanese family.

Small utility knives, known as kozuka (小柄), had long been highly valued craft objects in Japan where they were traditionally cast from fine metals, such as bronze. After Japan opened to international trade, craftsmen produced kozuka for Westerners who sometimes repurposed the handles to make dining knives. Eventually Japanese manufacturers began selling the handles alone, crafting them from various metals with die stamped decoration gilded in select areas. The Gorham Manufacturing Company added their own sterling silver blade designs, decorated with butterflies, fans, and geometric patterns applied to Western-style utensils, such as dessert forks and salad servers. The resulting knives resemble Japanese swords with decorated handles.

[center plate]
The young man with a sword and the landscape backdrop on this plate are broadly adapted from Japanese woodblock prints of actors. A few details suggest that Wedgwood’s artist studied Japanese prints: the placement of the feet and the bend of a wrist. However, the clothing and the landscape structure are so unlike Japanese styles, they prove they were not copied from a Japanese source.

This dinner gong exhibits faux bamboo supports and sparrows in flight, highlighting the European maker’s interpretation of Japan’s admiration for the natural world and its influence on Western art.

A dragonfly appears on this sugar bowl. This common Japanese decorative motif was eagerly absorbed by the West during the height of Japonisme and by the Art Nouveau movement that followed it.

This unusually shaped pitcher, with chased decoration wrapping around all three sides, has a handle shaped like a segmented stalk of bamboo.

The pattern Gildea & Walker marketed under the trade name of “Melbourne” was one of the most popular transfer-printed designs in the Japanesque style and was offered in several colors. The eclectic, asymmetrical pattern incorporates a seascape, horizon line, sparrows, bamboo, blossoms, and an owl in the moonlight.

English designer Christopher Dresser (1834–1904) traveled extensively throughout Japan in 1876–77 as a guest of the Japanese government. He was accompanied by translators, guides, sketch artists, and photographers. Dresser visited Buddhist temples, Shinto shrines, and historic sites. He met artists and craftspeople at dozens of potteries and workshops focusing on metalwork, basketry, and lacquer. Upon returning, he published Japan: Its Architecture, Art, and Art Manufacturers (1882), one of the first wide-ranging Western publications on Japanese arts and architecture.

The Gorham Manufacturing Company excelled in crafting Japanese-inspired objects of copper with silver appliqués that were hand hammered by their artisans. The small, patinated copper lighter exhibited here has a dragon handle; a spider appears on one side, while a Japanese woman and crane appear on the other side.

The Gorham Manufacturing Company began as a small silversmithing company in 1831, later becoming New England’s premier artistic silver manufacturer. John Gorham (1820–98) and his chief designer George Wilkinson (1819–94), who traveled to Japan in 1880, rivaled Tiffany & Company in their successful adoption of Japanese principles in the development of a wide range of wares. This eclectic Turkish-style coffee pot exhibits applied silver floral decoration on its front and a dragonfly on back.

Two flies are perched upon this tea caddy. Like the spider-and-web motif, Western artists had never thought to use flies as applied ornament before exploring Japanese art.

This tile shows three cranes flying above waves, with a full moon and two clouds behind them. The cranes and waves are adapted from a Japanese pot that was displayed as a “jardinière” at the International Exhibition in London in 1862. The Minton Archive holds a drawing signed by Christopher Dresser that shifts the motif on the pot to a horizontal format with three cranes flying over stylized waves, along with a cloud and full moon.

The exterior of this seafood salad bowl is decorated with three different applied decorations in the form of a stylized carp caught in a net. In Japan, the carp (koi, 鯉) symbolizes courage, strength, and fertility.

Tiffany & Company was America’s most distinguished artistic goods manufacturer and one of the first to adopt Japanese-influenced decoration, which was lauded as far as Europe and Japan. The company began importing Japanese works under the guidance of designer Edward C. Moore (1827–91). Moore amassed a large collection of Japanese art, including ceramics, textiles, and metalwork that was later bequeathed to the Metropolitan Museum of Art. He also established Tiffany’s study collection and library. Most likely, Moore commissioned Christopher Dresser (1834–1904) to assemble a collection of objects during his tour of Japan in 1876–77. 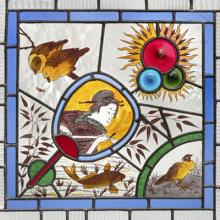 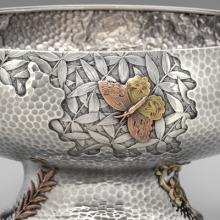 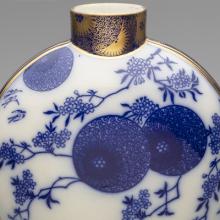 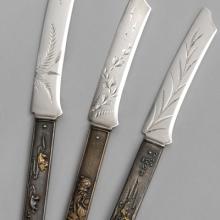 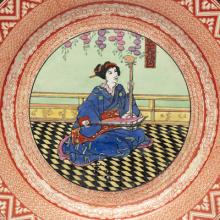 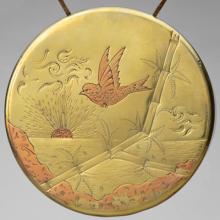 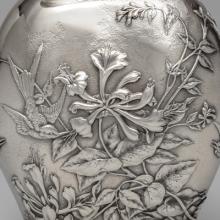 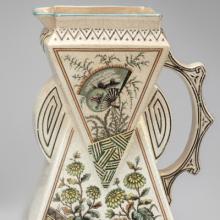 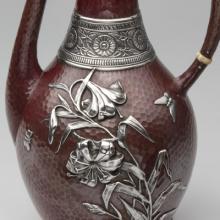 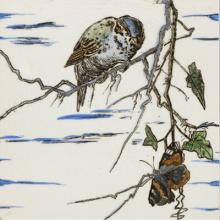 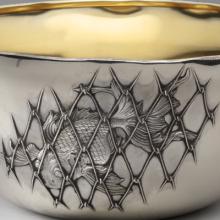 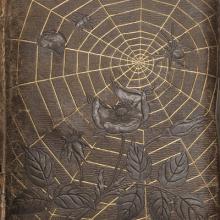