Surf’s Up! Behind the Scenes of an Exhibition at SFO Museum

[above image]
Installation of Surf’s Up: Instrumental Rock ‘n’ Roll

Exhibitions at SFO Museum (SFOM) originate from either a collection or an idea. As one of two curators of non-aviation exhibitions, my task is to source and interpret material from outside the museum, as we do not collect non-aviation related items. Working without a permanent collection to draw from is both challenging and rewarding. We are constantly surprised at the quality of other collections in the San Francisco Bay Area that support the program at SFOM, as well as the private and museum collections found outside the area.

Ideas for exhibitions seem to surface everywhere, and not always while at the museum. In December 2018, I attended a benefit concert in Long Beach, California, for Paul Johnson, a foundational surf music guitarist from the early 1960s who was diagnosed with leukemia. Watching the historic and contemporary bands perform and seeing the enthusiasm of the crowd, I started to wonder if surf music had ever been the subject of a museum exhibition. 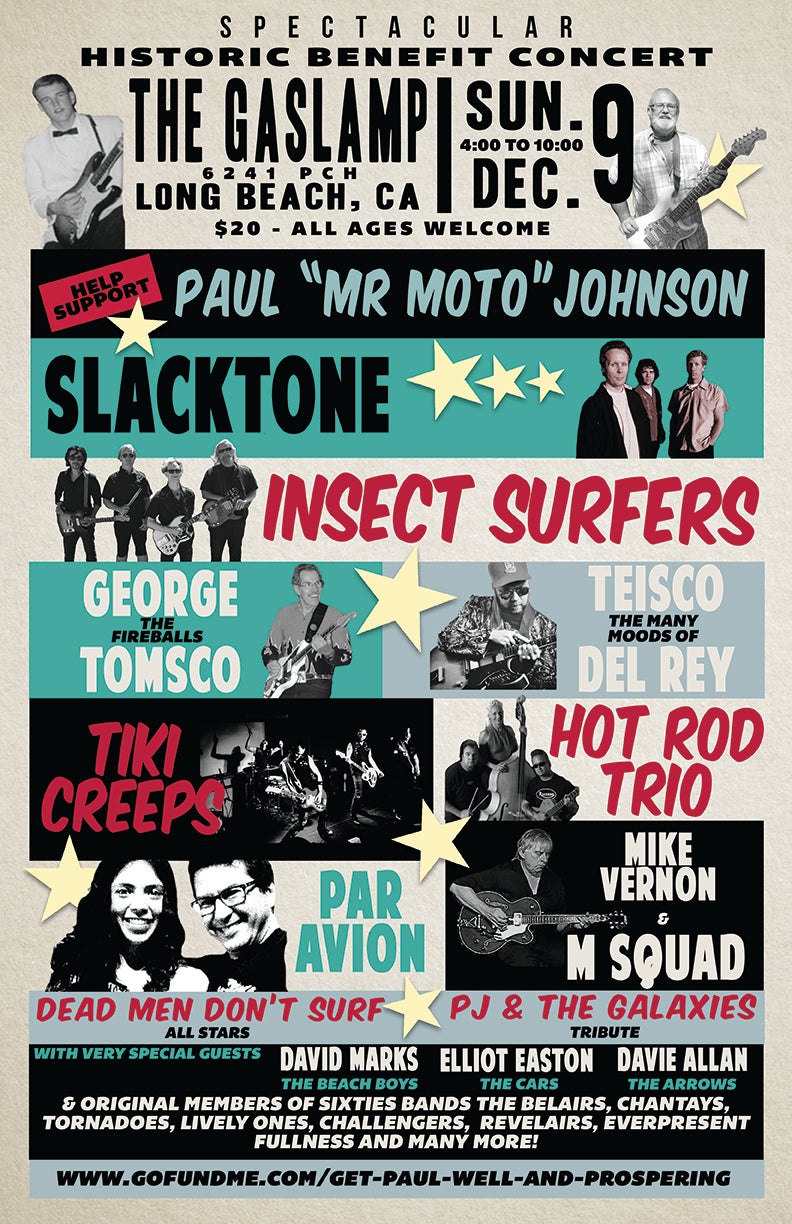 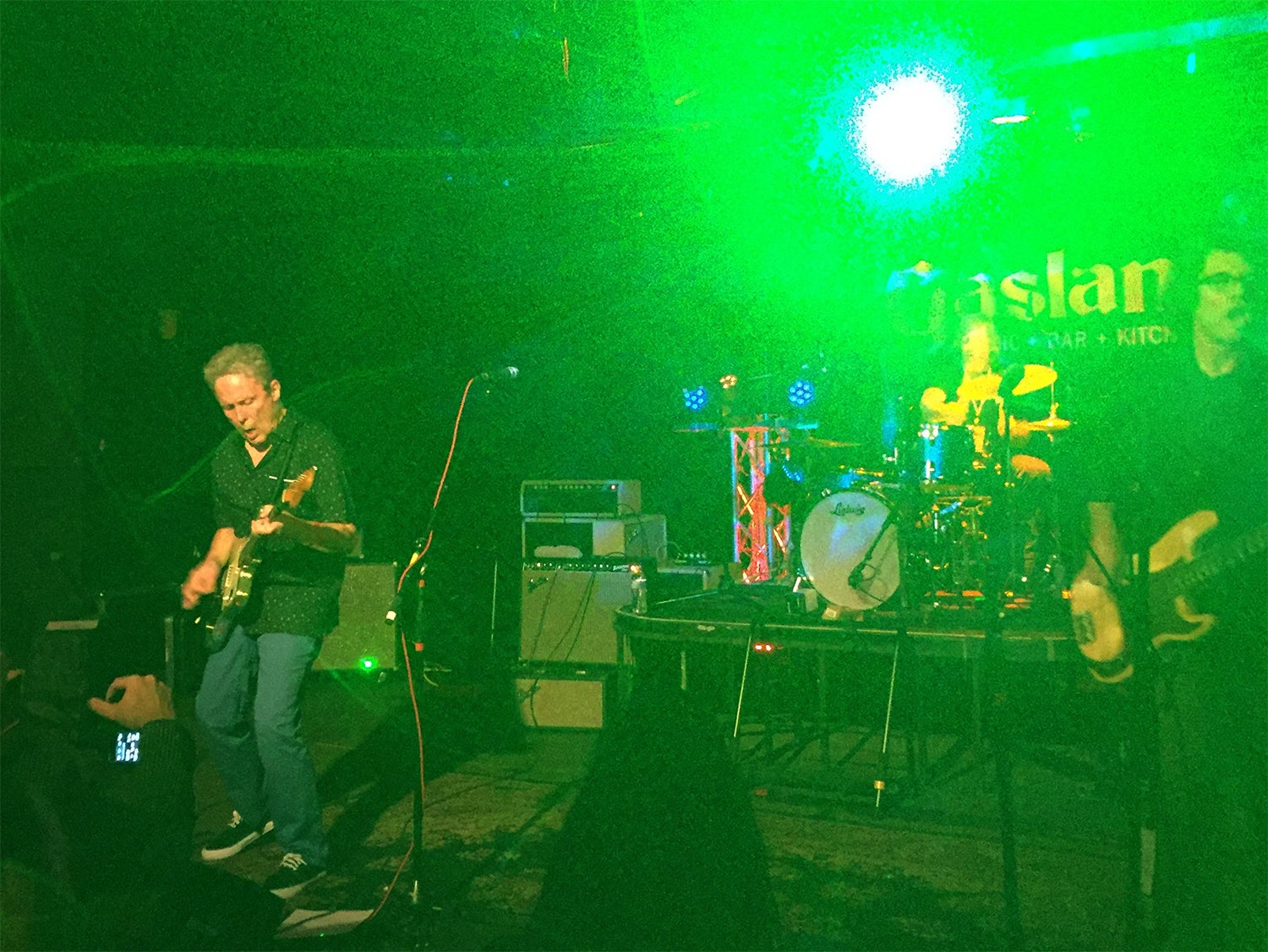 Back at the Museum, searches turned up a few exhibitions that focused on the 1960s surf music phenomenon, but nothing that connected the genre to the present. After a pitch to my colleagues, the project was approved, and the hunt for supporting material was on. The first big break came after contacting John Blair, noted surf music historian, founder and guitarist for the surf revival group Jon & The Nightriders, and emcee of the Paul Johnson benefit concert. John replied with enthusiasm and our exhibition designer and I traveled to Southern California to document his collection. 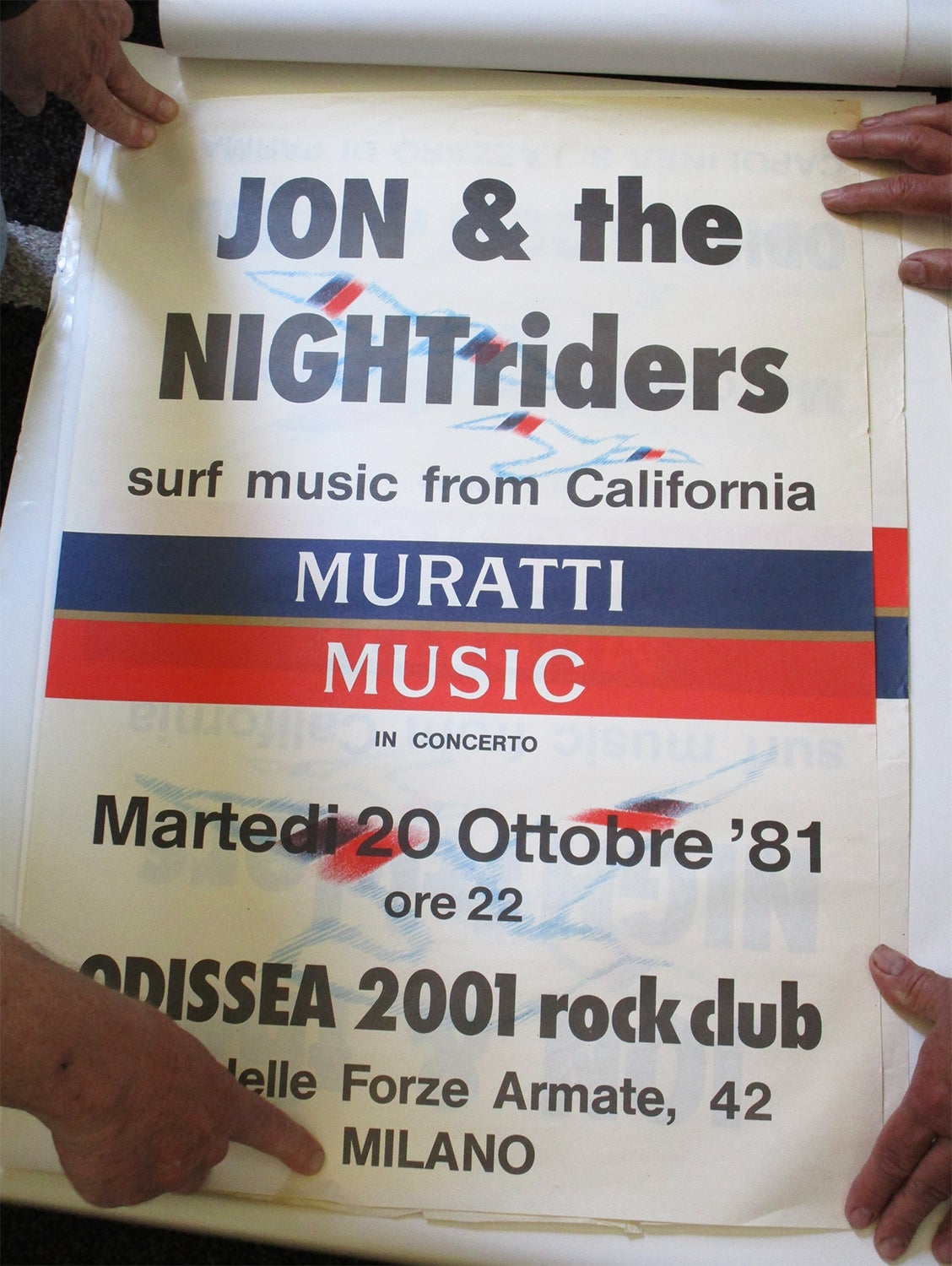 With a central collection confirmed, I started to research material for the exhibition, which led to musician, author, and collector Deke Dickerson’s book, Strat in the Attic: Thrilling Stories of Guitar Archaeology. While scanning the book, I could not believe my eyes. Deke Dickerson had documented his discovery of two extremely important guitars: a 1958 Danelectro Guitarlin previously owned by Link Wray and a 1960 Howard double-neck customized for Duane Eddy! I quickly contacted Deke about borrowing the guitars and received another enthusiastic “yes.” Another breakthrough came after a friend connected me with members of the San Francisco Bay Area surf group, The Phantom Surfers. Mel Bergman, Johnny Bartlett, and Michael Lucas kindly offered their collections for display, and we began to collaborate via email and site visits. Soon thereafter, Mel miraculously located and procured a 1961 Fender Showman amplifier that had been owned by Rich Fifield of The Astronauts, the famous, early 1960s surf band from Boulder, Colorado (of all places). Now we had some serious traction for the exhibition. 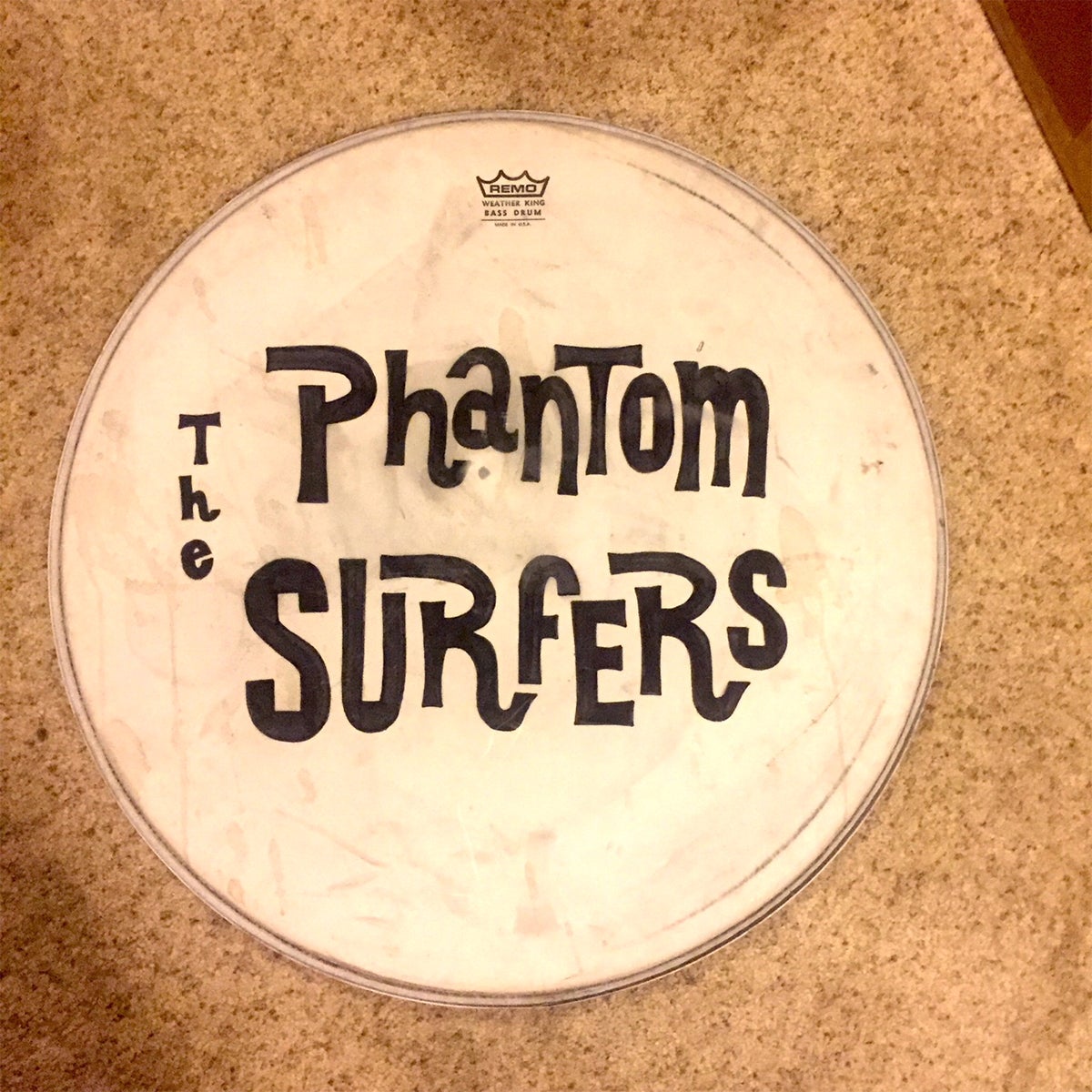 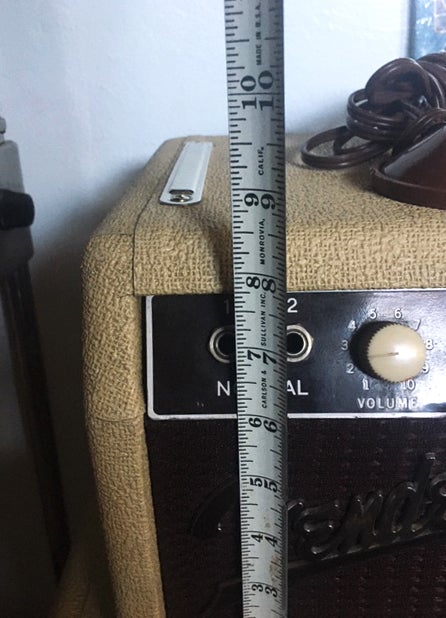 Further research led to other important additions to the exhibition. Items directly connected to members of 1960s instrumental rock and surf music groups are exceptionally rare, seeing the genre had almost completely vanished by the end of the decade (until it was revived years later in the 1980s). On the internet I located a story about Nathan Fasold, the owner of Blackbook Guitars in Portland, Oregon. While working with Don Wilson of The Ventures, Nathan procured a number of rare items from the foundational group and offered them for loan, including Wilson’s 1966 Mosrite guitar. 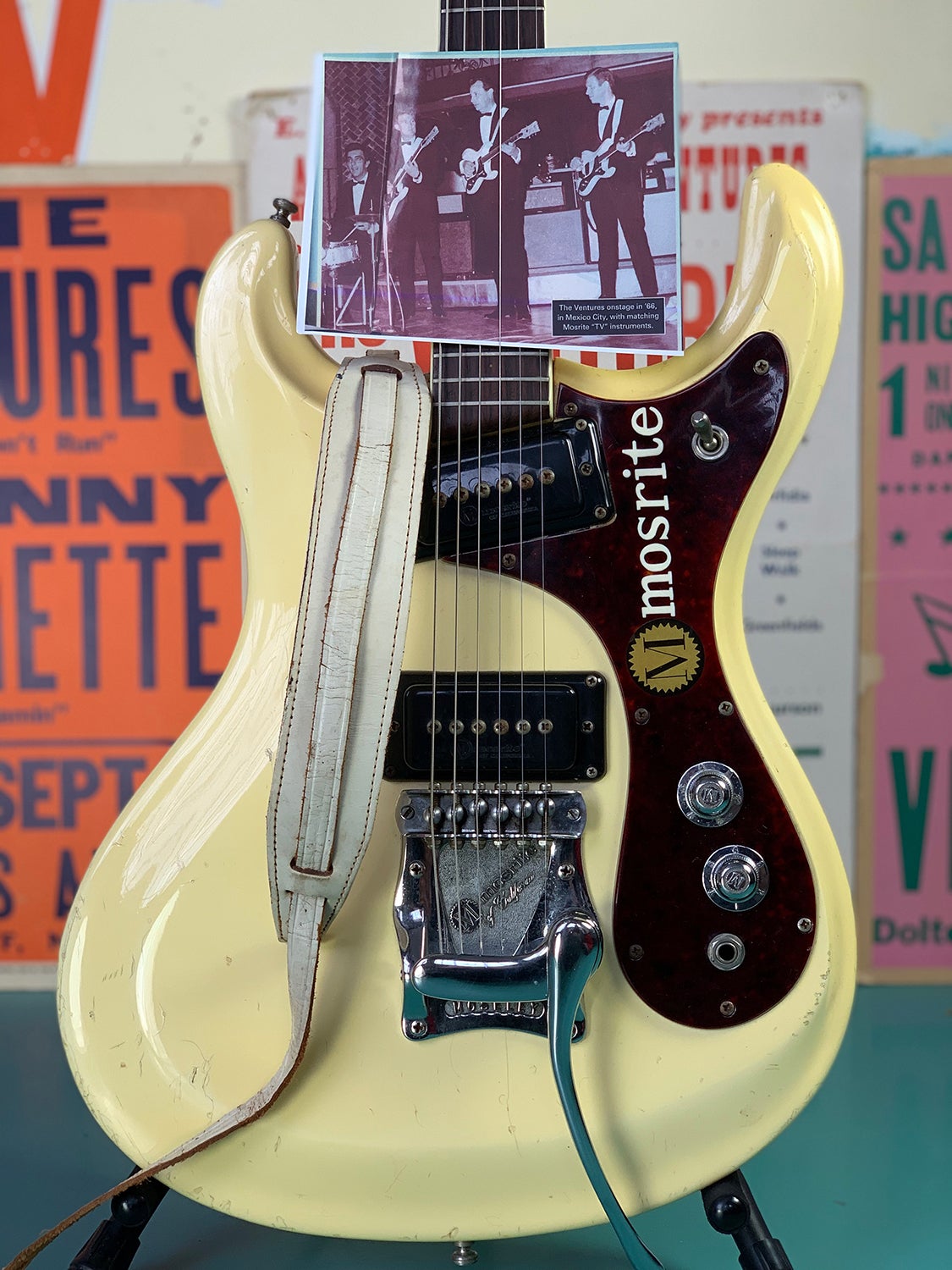 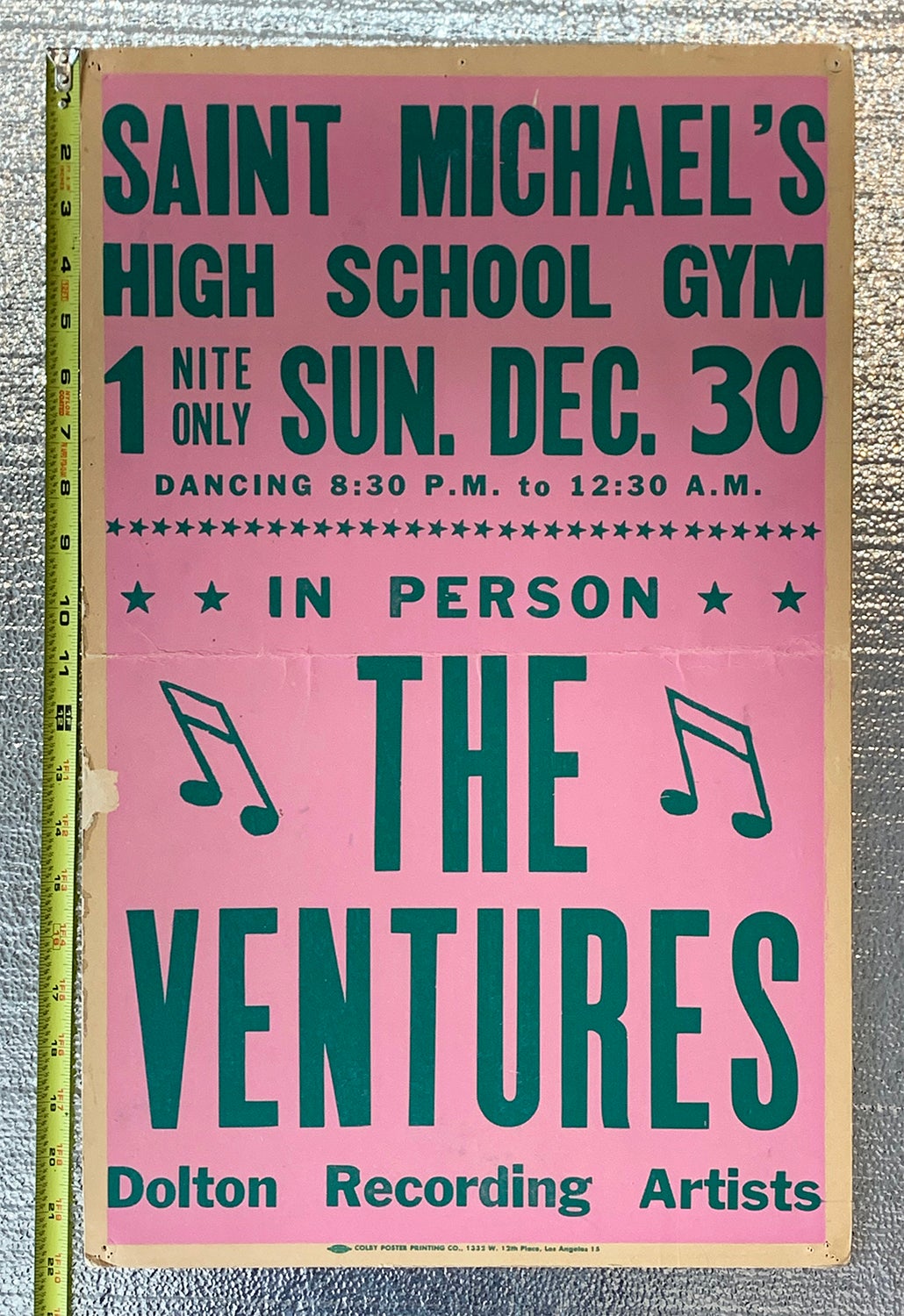 As other items surfaced, we decided to include record album covers as a consistent presence throughout the exhibition. Our first stop for rare rock ‘n’ roll records from the 1950s–60s is usually Mickey McGowan, an artist, curator, and founder of the Unknown Museum in San Rafael. Mickey is one of our favorite lenders and he never ceases to surprise us. As it turns out, Mickey grew up surfing in the South Bay of Los Angeles and saw Dick Dale and his Del-Tones perform at the famous Rendezvous Ballroom at Balboa Beach. Of course, Mickey had the records we were after—how cool is that! 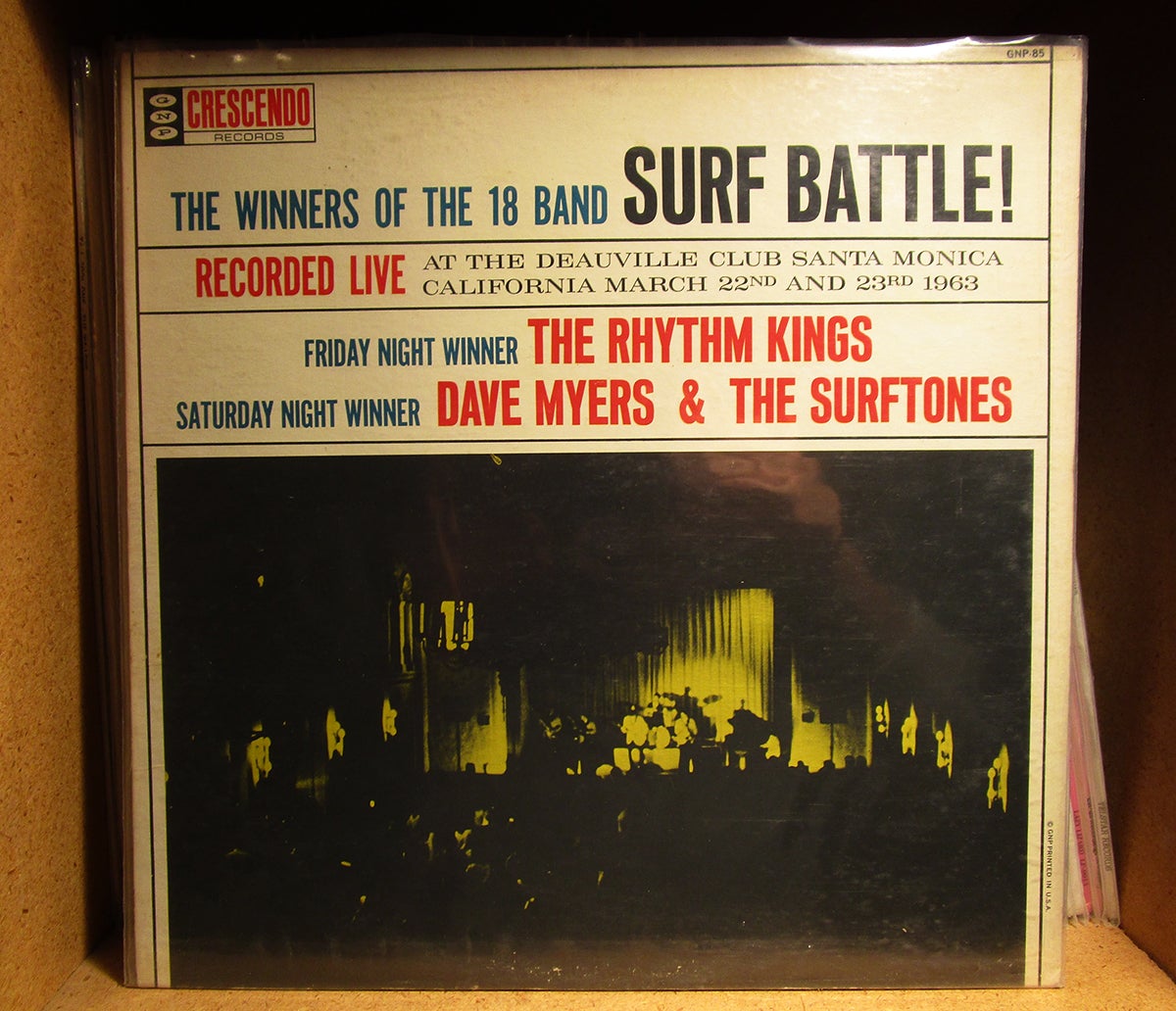 The next step was to plot the initial layout with the exhibition designer and make our final object selections. The exhibition checklist and corresponding images were sent to a registrar, who handled all of the loan paperwork, shipping arrangements, and condition reporting. Once the objects arrived, they were assessed by registration and conservation and we began to collaborate with graphic design. Around this time, preparators began mount-making for each object to insure stability while on display. This customized Fender Jaguar is on loan from Dave Wronski of the contemporary, Southern California group Slacktone. 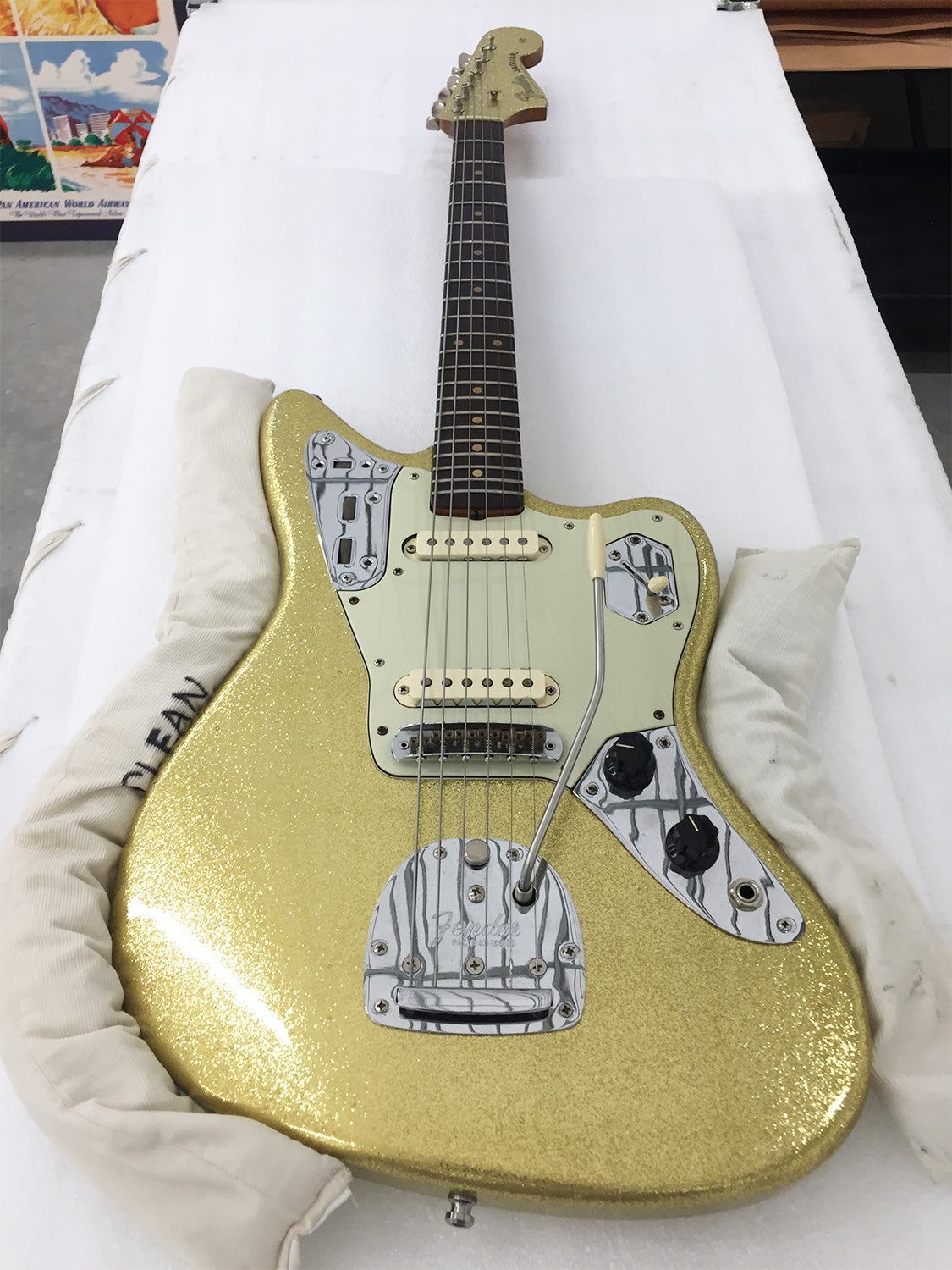 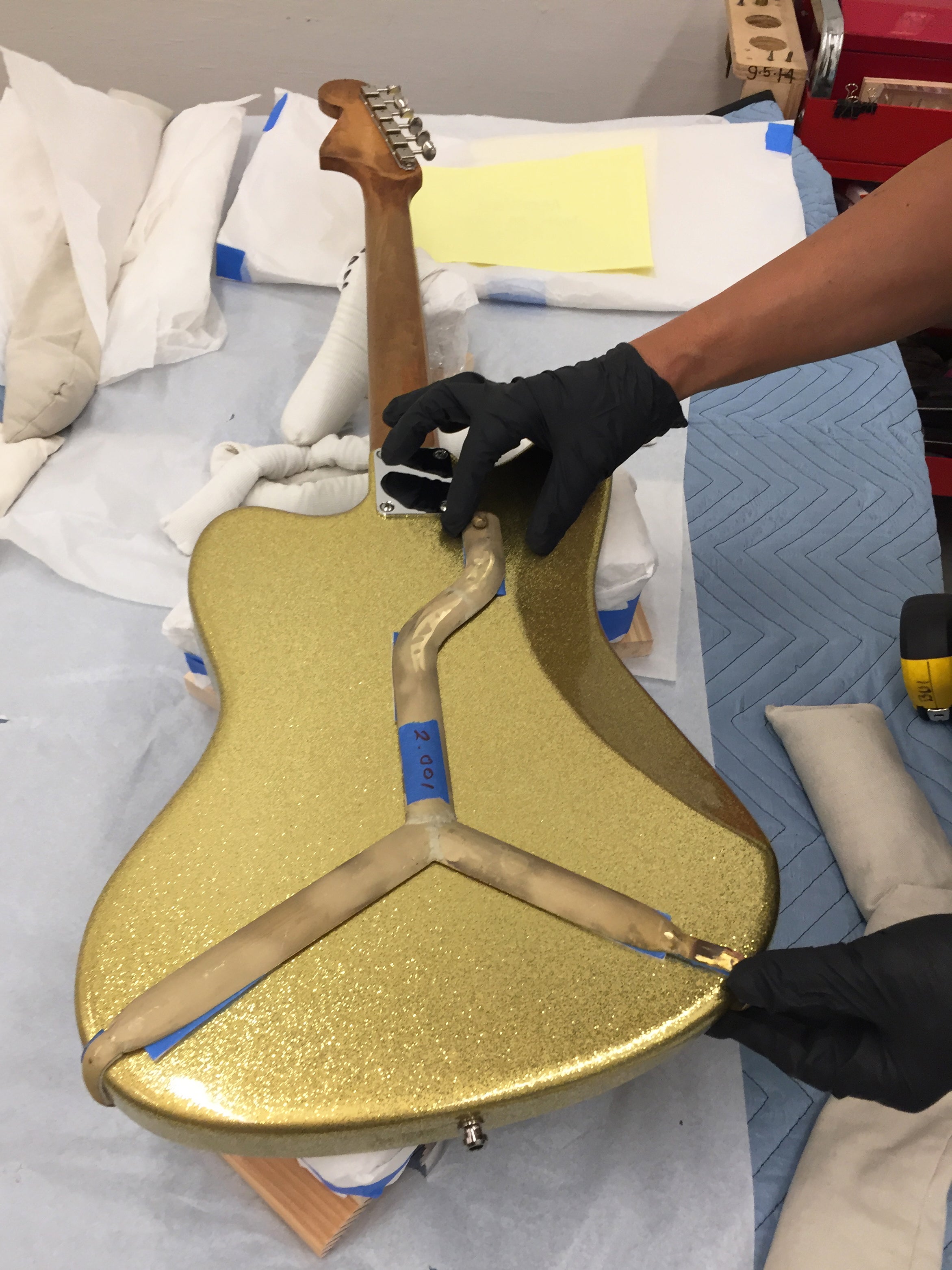 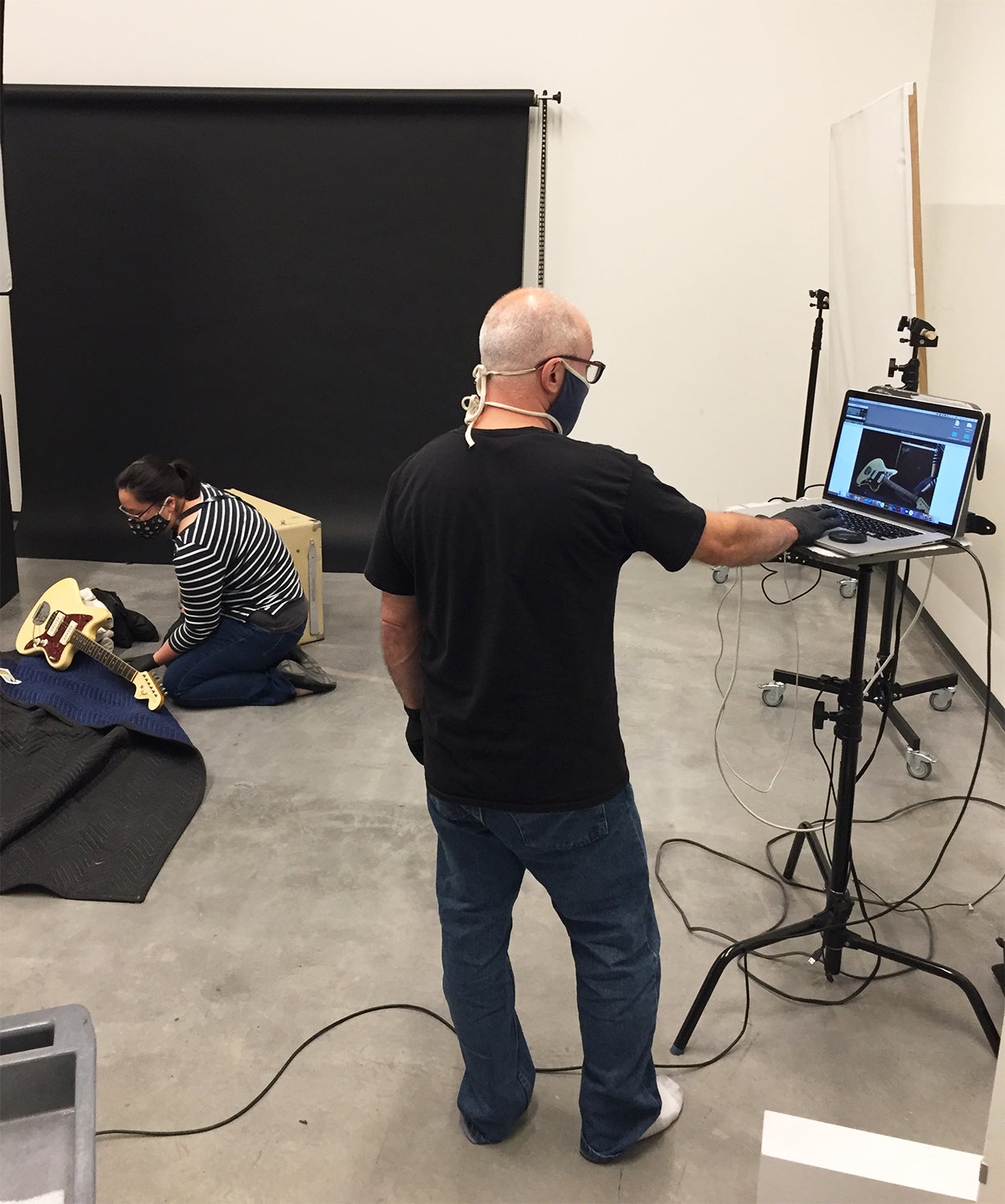 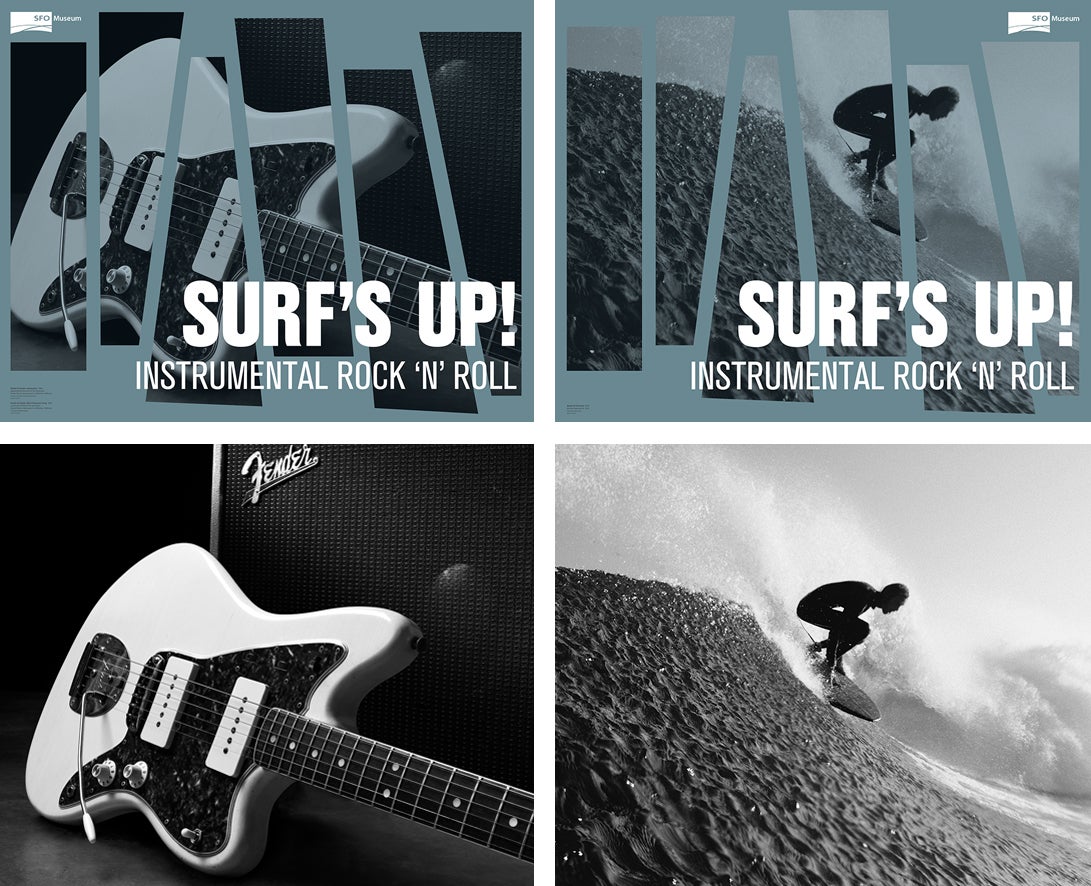 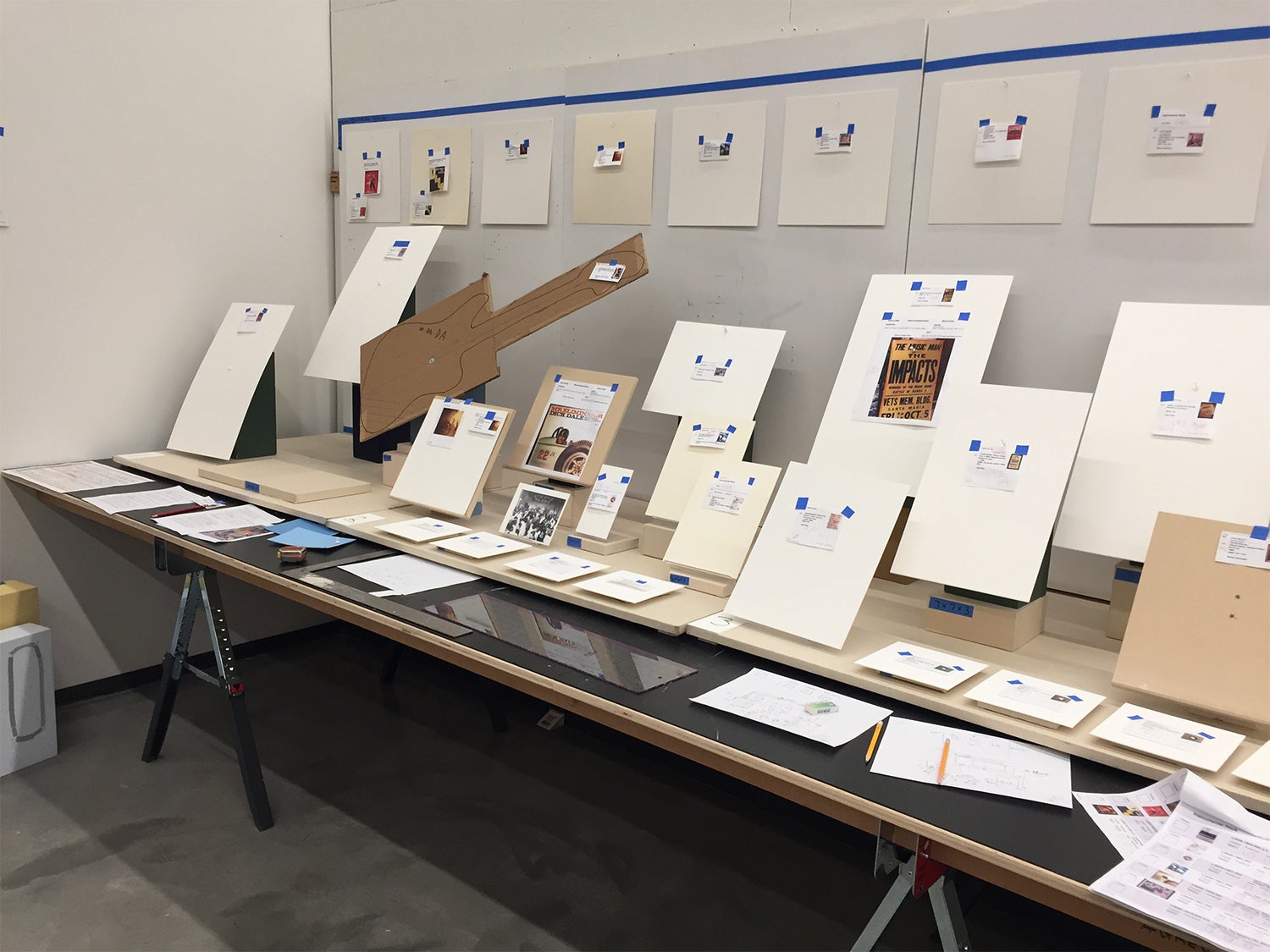 Installation week is always an exciting time at the museum. Years of research and planning by curators are combined with months of dedicated work by many different members of the SFOM team. Without the luxury of closing down a gallery for installation (the airport is open 24/7), careful planning and preparation ensure that all parts of the exhibition come together quickly in harmonious fashion. 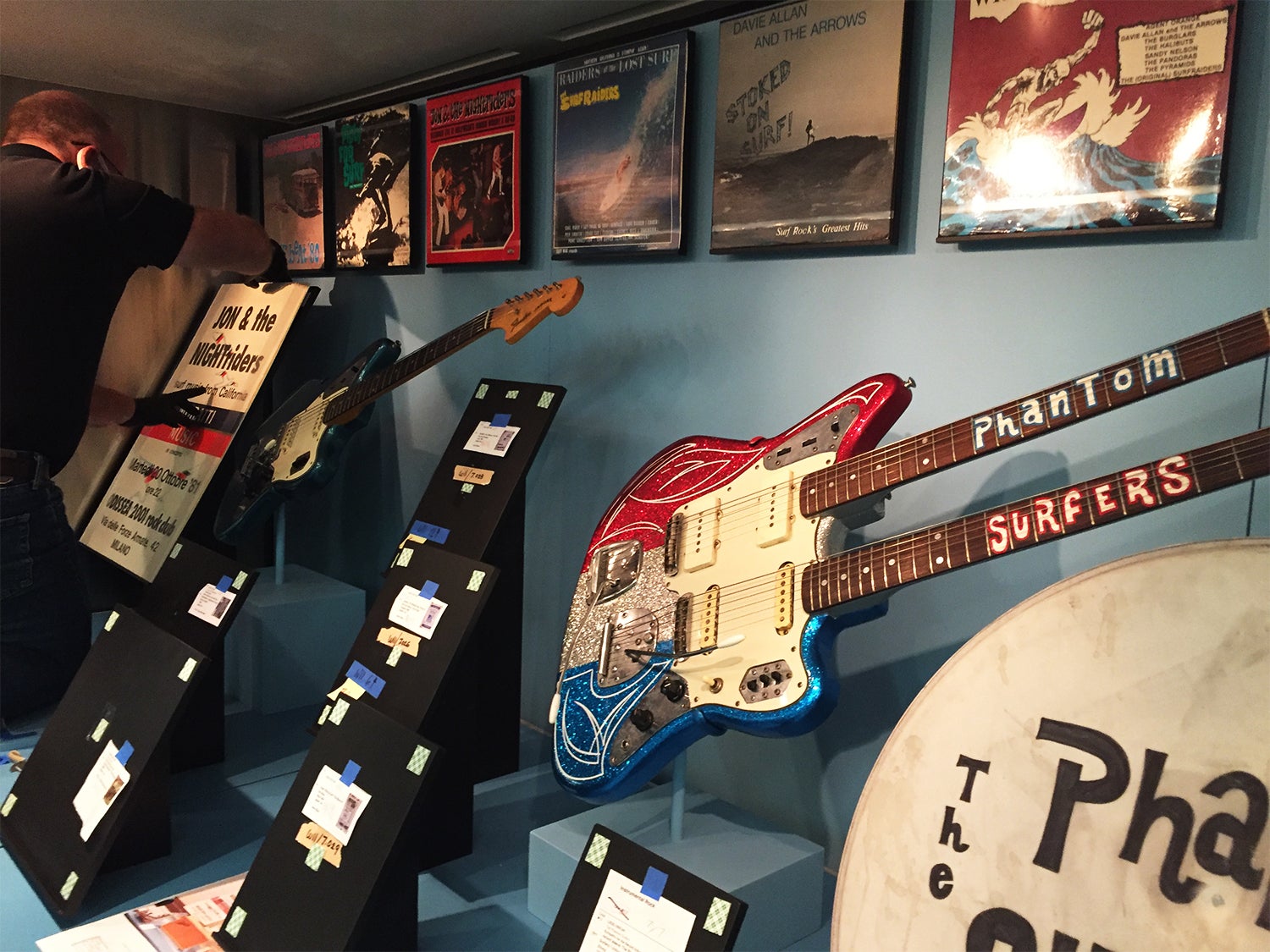 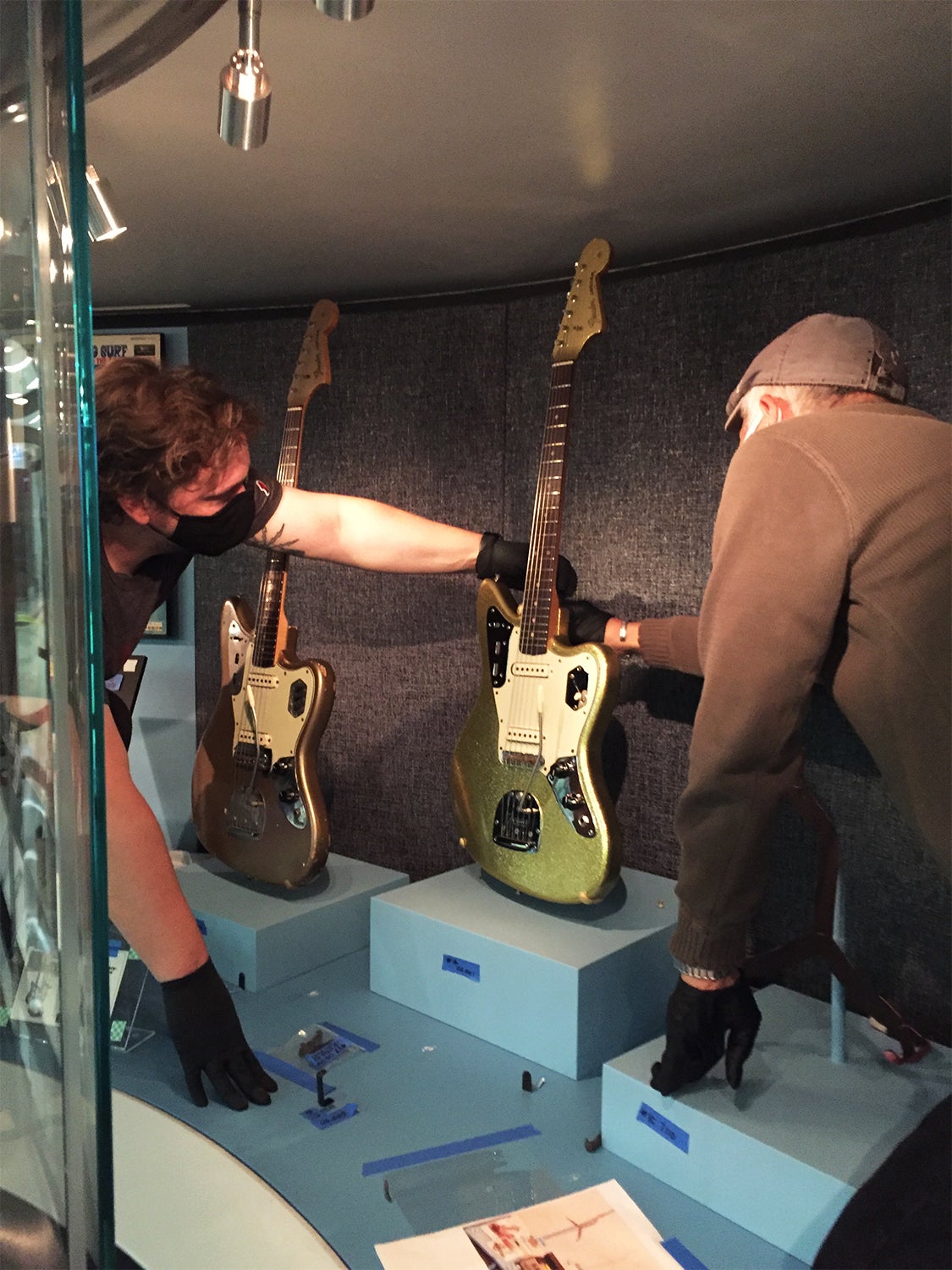