Threading the Needle: Sewing in the Machine Age

Threading the Needle: Sewing in the Machine Age

For approximately 20,000 years, hand sewing with needles and thread made from various materials remained unchanged. When the sewing machine was first introduced to American homes in the 1850s, it was heralded as a laborsaving device that would transform the domestic lives of women everywhere. Sewing clothing and household linens, once a time consuming, never ending task, no longer had to be painstakingly completed by hand. The popular and influential Godey’s Lady’s Book soon coined the sewing machine “the queen of inventions” and declared that every family in the United States should own one.

Long before 1850, many inventors attempted to fabricate mechanical sewing devices. In 1790, the British inventor Thomas Saint patented a machine for sewing leather, though it was never manufactured. Forty years later in France, tailor Barthelemy Thimonnier (1793–1857) patented a sewing machine. When a clothing firm established a manufactory with eighty of his machines to sew uniforms for the French army, a mob of angry tailors who viewed the new invention as a threat to their livelihood destroyed them all.

New Yorker Walter Hunt (1796–1860), the inventor of the safety pin, developed an innovative sewing machine in 1834. It had an eye-pointed needle that used two spools of thread (one from above and one from below) to form a lockstitch. But Hunt neglected to patent his machine, and it was never manufactured due to production costs and pressure from many who felt the device would undermine the work of hand sewers. Unknowingly, Elias Howe (1819–67) of Massachusetts patented a similar sewing machine in 1846. Unsuccessful in marketing the device in America, Howe tried his luck in England. He returned penniless to find that many companies were not only selling sewing machines, but also infringing on parts of his 1846 patent. Howe successfully sued many of these manufacturers for royalties, including Isaac M. Singer (1811–75). He initially received five dollars for each machine sold in the United States and one dollar for each machine exported. Howe eventually collected over two million dollars before his patent expired in 1867.

Several other American inventors made important technical contributions to the development of the early sewing machine, but it was Isaac M. Singer patented the first truly, commercially successful sewing machine in 1851. His machine offered convenient features such as a foot treadle, which replaced the cumbersome hand crank to power the needle. Many more technological advances emerged during the Industrial Revolution that eased household sewing. For instance, power looms enabled retailers to offer vast quantities of fabrics by the yard, and easy-to-fit, mass-produced tissue paper patterns became available in standardized sizes.

Threading the Needle: Sewing in the Machine Age traces the development of the domestic sewing machine from the 1850s to the 1970s and celebrates over one hundred years of sewing. Pattern illustrations featured in the exhibition highlight ladies homemade fashions throughout the decades. A variety of notions from sewing boxes and sewing birds to needle cases, chatelaines, and pincushions, are also on display.

This exhibition was made possible through a generous loan from the Museum of American Heritage,
Palo Alto, CA, Lacis Museum of Lace and Textiles, Berkeley, CA, and the Lace Museum, Sunnyvale, CA.
©2012 by San Francisco Airport Commission. All rights reserved 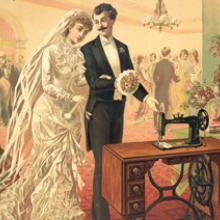 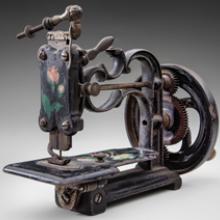 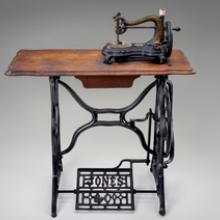 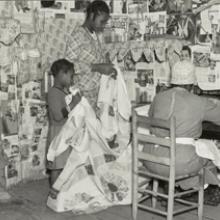 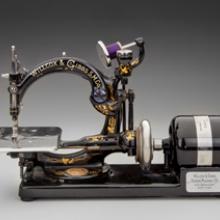 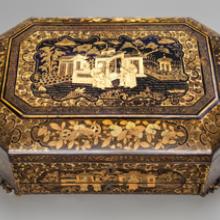 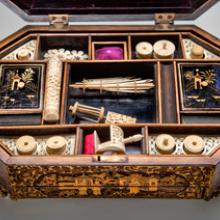 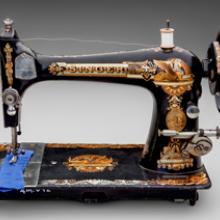 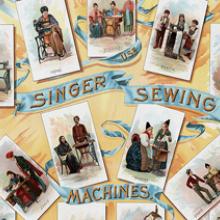 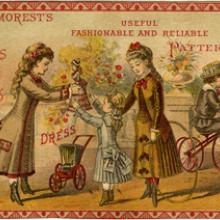 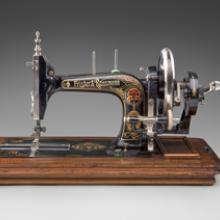 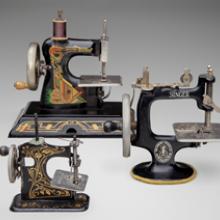 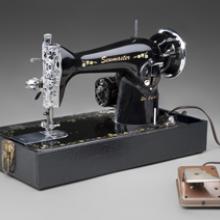 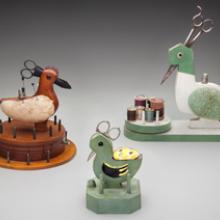 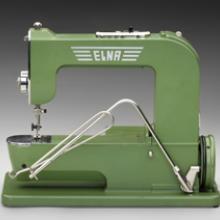 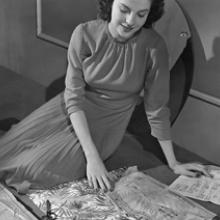 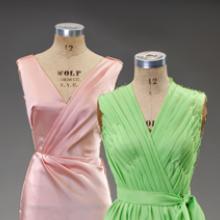 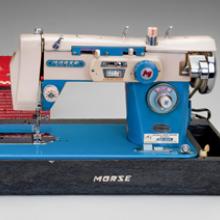