Scenes from Myths and Daily Life: Ancient Mediterranean Pottery from the Collections of the Phoebe A. Hearst Museum of Anthropology

Scenes from Myths and Daily Life: Ancient Mediterranean Pottery
from the Collections of the Phoebe A. Hearst Museum of Anthropology

Ancient Mediterranean painted pottery, a remarkable craft from classical antiquity, continues to captivate viewers thousands of years later. Pottery is more commonly excavated and preserved than any other early art form. Scenes depicted on Greek and Etruscan vases reveal many of the cultural practices and daily lives of these ancient peoples. Ceramic vessels explore a wide variety of subject matter including myths, gods and demons, warriors at battle, animals, social gatherings, athletics, and the roles of men and women in society. 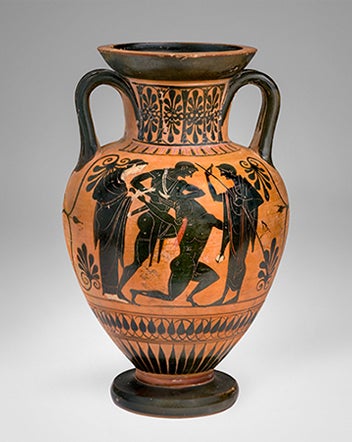 Clay, which was plentiful in many parts of Ancient Greece and Italy, served as the primary material for most vessels. Although the affluent owned some precious metal containers, nearly every household possessed a range of pottery both coarse and fine for storage, cooking, and dining. Pottery was also used for ceremonial and religious purposes.

A coastal people, the Ancient Greeks prospered in maritime commerce and developed a rich and complex culture. The Greek world eventually extended beyond Greece to settlements throughout the Mediterranean and Black Seas. Greek arts flourished from 700 to 300 BCE. During this time, two of the main ceramic centers in Greece, Corinth and Athens, exported the distinctive and highly sought-after painted pottery throughout the Mediterranean region.

The Etruscans inhabited north-central Italy, a region in classical times referred to as Etruria. They developed a taste for Greek painted pottery, which they imported from Corinth around 630 to 540 BCE. By the second quarter of the sixth century, the Etruscans purchased an increasing number of vessels from Athens. These imports inspired Etruscan potters to locally produce black- and red-figure wares.

The black-figure technique was developed about 700 BCE in Corinth. Artisans applied a black slip to depict figures and ornamental motifs against the clay's natural, reddish-orange background. The details were either incised or added in colors; female skin was typically painted white. The red-figure technique was invented in Athens about 530 BCE and gradually became the predominant style. It is the reverse of black-figure: the figures appeared in reddish-orange, with figural details applied in black lines against a black background. 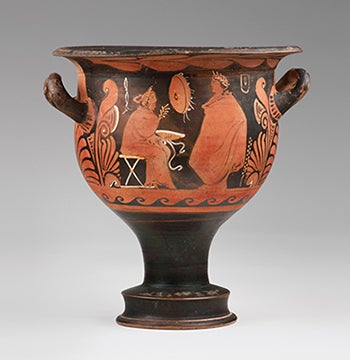 This exhibition explores black- and red-figure pottery of Ancient Greece and its colonies, as well as Etruscan wares. From drinking cups intended to ward off the "evil eye" to pots that depict famous Greek heroes and gods such as Heracles and Zeus, Scenes from Myths and Daily Life: Ancient Mediterranean Pottery showcases a spectacular range of vessels.

Ancient Greek Historical Periods Represented by the Pottery on Display

Archaic: 700–479 BCE
Greek city-states prosper and Greek colonies develop throughout the Mediterranean and Black Sea regions. Commerce and the arts flourish; the cities of Corinth and Athens grow and democracy begins to develop. The Greeks defeat the Persians who threatened to extend their control to the Greek mainland.

Classical: 479 BCE–323 BCE
During the classical era, Athens reaches its greatest political and cultural achievements: the development of a democratic system and the building of the Parthenon; the creation of the tragedies of Sophocles, Aeschylus, and Euripides; and the founding of the philosophical schools of Socrates, Plato, and Aristotle. Alexander the Great brings the Eastern world to the Indian subcontinent under his control before dying at the age of thirty-two in 323 BCE.

Hellenistic Period: 323–31 BCE
Following the death of Alexander the Great, his kingdom is divided into three by his generals: Macedonia, including much of mainland Greece, the Seleucid Empire, including the Near East, and Egypt. The Hellenistic period is an international, cosmopolitan age. By the second century BCE, Rome becomes the dominant force; Romans conquer Macedonia in 168 BCE, destroy the city of Corinth in 146 BCE, and capture Athens in 86 BCE.