From Print to Plate: Views of the East on Transferware

from Print to Plate
Views of the East on Transferware

Blue-and-white transferware reached its peak in production and popularity in the first half of the nineteenth century. Staffordshire potters in central England first developed a successful method for transferring designs onto wares using hand-engraved copperplates as early as the mid-eighteenth century. Previously, potters laboriously applied decoration by hand, which consumed a great deal of time. The process of printing designs on paper and then transferring them directly onto wares transformed the ceramics industry and became a hallmark of the Staffordshire pottery industry. 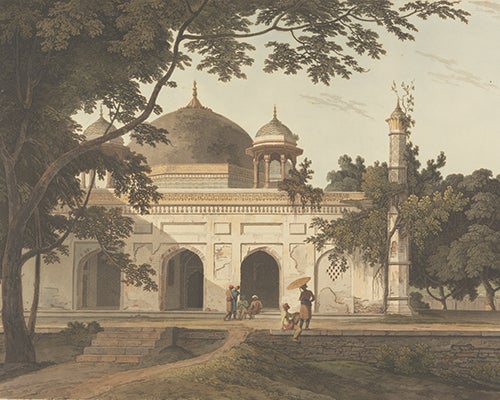 Abundant supplies of coal and many types and grades of clay were readily available to Staffordshire potteries. Blue-and-white pottery, made from white earthenware, was colored with cobalt oxide. After its first firing, the printed image was applied to the ware and fired again, then dipped in glaze and fired a third time. Some of the practical forms produced in large quantities for the dinner table included dishes, platters, and soup tureens. Households prominently displayed their finest blue-and-white wares on sideboards for guests to admire. Designs on wares often featured exotic, distant lands such as India, the Middle East, and China.

A number of superbly illustrated books made by European travelers and artists in the early nineteenth century helped fuel the British public’s fascination with foreign locales. In an era before photography, over-sized tomes, such as Thomas and William Daniell’s Oriental Scenery (1795–1807), depicted the stunning landscapes and historic architecture of India. Such volumes featured outstanding examples of aquatints, produced using a printmaking technique that created tonal gradations resembling ink or watercolor washes. These prints introduced British viewers to the sites and scenes of distant lands they could only dream of experiencing in person. Because effective copyright law did not exist in England before 1842, potters began using images from these scenic publications on ceramics as early as 1810. Makers rarely copied scenes faithfully; instead, they freely adapted imagery—adding, removing, and even reversing sections of prints. Elements from several prints were often combined into one design. 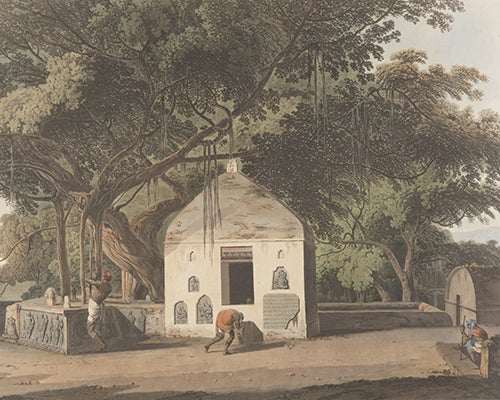 This exhibition features blue-and-white wares made by Spode and a number of other British potters. Scenes featured on wares range from famous architectural views of India, such as the Taj Mahal, drawn from A Picturesque Tour along the Rivers Ganges and Jumna in India (1824) to scenes of Turkey and China taken from Views in the Ottoman Empire (1803) and A Picturesque Voyage to India by the Way of China (1810). The corresponding prints accompany the ceramic wares. 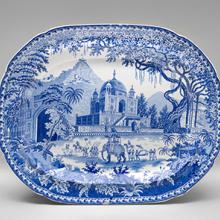 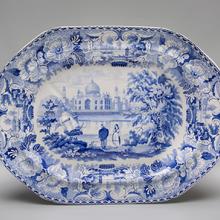 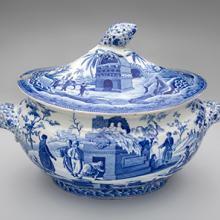 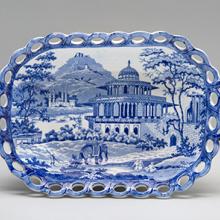 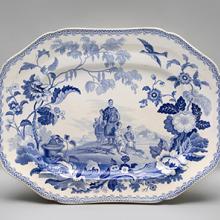 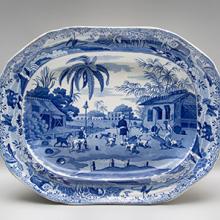 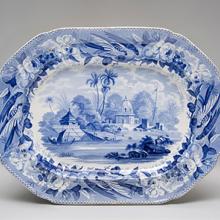 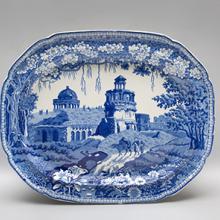 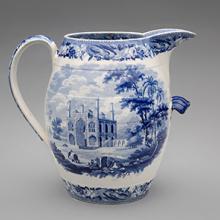 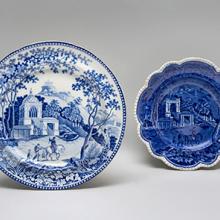 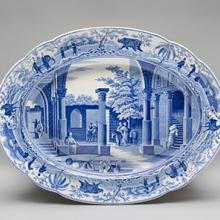 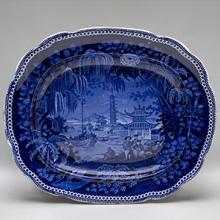