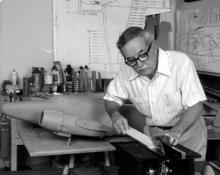 This ongoing exhibition is a selection of work from Edward Chavez (1917-2004), a recognized master within the aircraft model-making community

In 1961, the Nut Tree Restaurant commissioned its first Chavez model after Edwin Power, a pilot and one of the restaurant's owners, had seen Chavez's work in the collection of the National Air and Space Museum. Over the next twenty-seven years, from 1961 to 1988, Chavez built twenty-seven models for the restaurant with occasional assistance from his friend Robert Fogg.