Liberian Helmet Masks of the Sande and Poro Societies from the Collections of the Phoebe A. Hearst Museum of Anthropology

Liberian Helmet Masks of the Sande and Poro Societies
from the Collections of the Phoebe A. Hearst Museum of Anthropology

Sande and Poro societies are found throughout Sierra Leone and Liberia, in parts of Guinea, and as far east as the borders of the Ivory Coast in West Africa. Many different cultural groups, such as the Gola, Temne, Mende, Vai, Kpelle, De, and Bassa, belong to these associations. Sande and Poro societies play a major social role in the local community life of many villages. They teach young men and women the domestic skills and knowledge they will need as married adults. Poro is the secret society for men, responsible for initiating boys into manhood, while its counterpart, Sande, initiates girls into womanhood. They are “secret” in the sense that members of each society have certain knowledge that can only be shared with other initiates.

Masquerades are an essential component of these widespread associations. Masked performers not only appear during initiation ceremonies, but many other important social occasions. The masks worn by Sande and Poro members possess unique characteristics and embellishments, while adhering to established aesthetic criteria.

Most African masks, whether they represent males or females, are carved and worn by men. The Sande society is the only known female group in Africa where the women wear masks. With finely carved, delicate features and elaborate hairstyles, Sande masks represent the epitome of female beauty. Masked performers, commonly referred to as zogbe or sowei, play a central role in Sande ritual activities. The costumed masker embodies the spirit of Sande, representing the society’s principles and ideals.

Among the Poro society, the Vai, Mende, Gola, De, and Southern Kpelle have a helmet-shaped wooden mask known as gbetu or bowu. The mask closely resembles those of the sowei masks of the Sande society, except that it has a long-ringed neck with a small head at the top. The helmet portions of the gbetu masks are typically carved with faces, while the base displays various arrangements of geometric motifs. Unlike Sande initiations where sowei masks perform important ritual functions, gbetu masks, though they may appear during the Poro initiation period, do not play a major ceremonial role.

This exhibition features more than twenty helmet masks attributed to the Gola, Vai, Kpelle, and Mende from the collections of the Phoebe A. Hearst Museum of Anthropology. The selections on view highlight the long-standing traditions of wood carving craftsmanship and masked performance among the Sande and Poro associations of West Africa.

This exhibition was made possible through a generous loan from the Phoebe A. Hearst Museum of Anthropology, University of California, Berkeley. Special thanks to Research Anthropologist, Ira Jacknis and Ruth B. Phillips, author of Representing Women: Sande Masquerades of the Mende of Sierra Leone.
©2010 by San Francisco Airport Commission. All rights reserved 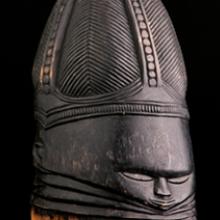 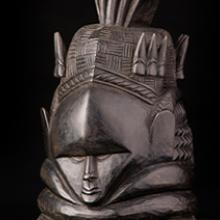 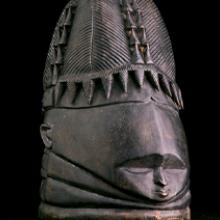 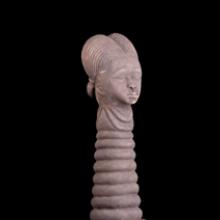 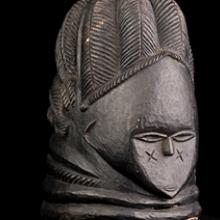 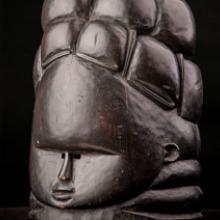 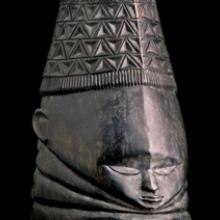 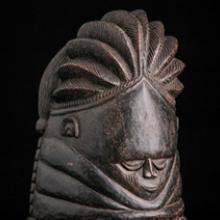 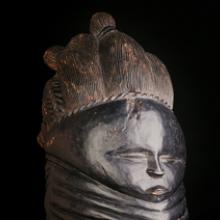 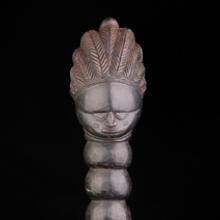