A Legacy of Pride: Gilbert Baker and the 40th Anniversary of the Rainbow Flag

When it went up and the wind finally took it out of my hands, it blew my mind…I saw immediately how everyone around me owned the flag. I thought, ‘It’s better than I ever dreamed.’

Shortly after the United States Supreme Court ruling on June 26, 2015, that guaranteed same-sex couples the right to marry, civic buildings across the country and around the world were illuminated in the colors of the rainbow. From San Francisco’s City Hall and New York’s Empire State Building, and from Puerto Rico’s Capitol Building to the Brandenburg Gate in Berlin, the vivid display was a clear indication of widespread support for the landmark decision. And the rainbow flag, introduced nearly forty years earlier at San Francisco’s Gay Freedom Day Parade, was unfurled from apartment balconies, attached to car windows, and appeared in the background for tens of millions of newly changed profile photos on social media accounts as a universally recognized symbol of pride and solidarity.

Gilbert Baker arrived in San Francisco in 1972 during the early years of the gay liberation movement. With sewing skills learned from crafting his own drag costumes, he was often asked to make political banners for street demonstrations. In the months leading up to the 1978 Gay Freedom Day celebration in San Francisco, City Supervisor and gay rights leader Harvey Milk and other local activists implored Baker to create a new symbol for the movement. Many found the Greek letter lambda, introduced shortly after the 1969 Stonewall riots in New York, too obscure. And many more were eager to supplant the pink triangle that the LGBTQ community had reclaimed from its original use by the Nazis to identify homosexuals. Baker seized on the idea of a flag as an appropriate symbol to proclaim power for his “tribe,” and a rainbow to represent his community’s diversity. He assigned symbolic meaning to each of the flag’s original eight colors—pink for sexuality, red for life, orange for healing, yellow for sunlight, green for nature, turquoise for art, indigo for peace and harmony, and purple for spirit. 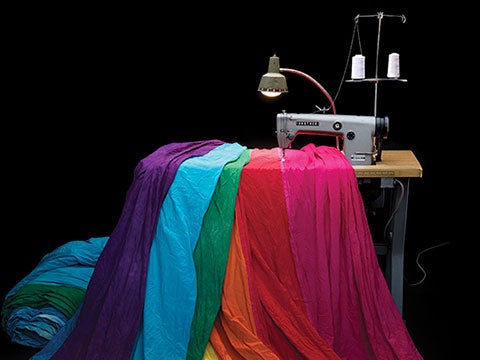 Baker and a team of thirty volunteers soaked strips of cotton muslin in trash cans filled with dye. Then, with help from his friends Faerie Argyle Rainbow (known as the “queen of tie-dye”) and James McNamara (a Fashion Institute of Technology graduate), they stitched the sections together to create the first of a pair of rainbow flags measuring 30 by 60 feet, one of which resembled the American flag with tie-dyed stars on a blue field. The flags were raised on June 25, 1978, in San Francisco’s United Nations Plaza—a deliberate choice intended to reflect the worldwide struggle for gay rights. The flag was immediately embraced by the majority of the LGBTQ community and was in great demand following the assassination of Harvey Milk on November 27, 1978. Baker joined the Paramount Flag Company, which supported his proposal to mass produce the symbol in 1979. At this time, the flag was reduced to its familiar six-band format due to the unavailability of material supplies (pink) and a desire for a symmetrical presentation as vertical banners on lampposts for the 1979 Gay Freedom Day Parade.

Over the next four decades, Baker worked tirelessly to ensure the rainbow flag would become a powerful and enduring symbol of pride and inclusion that transcends languages and borders, gender and race, and now, four decades after its creation, generations. After suffering a stroke in 2012, Baker retaught himself how to sew, continued to make art every day, and witnessed the full appreciation of the symbol he created. This included its recognition as a historically important design icon when acquired by the Museum of Modern Art’s design collection in 2015, and a White House ceremony in which Baker presented President Barack Obama with a framed copy of his original eight-stripe rainbow flag in 2016. One of Baker’s final creations before his death in 2017 is on exhibit here—the flag he made for the ABC television miniseries When We Rise, based on the memoirs of his longtime friend, LGBTQ activist Cleve Jones. Jones recalls that when the rainbow flag was first unfurled in 1978, Gilbert “knew at that moment that it was his life’s work,” and refers to Baker’s creation as “his gift to the world.” 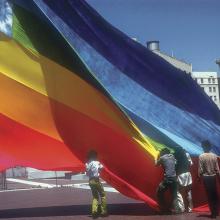 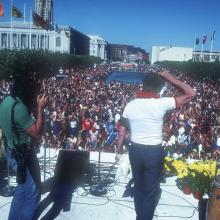 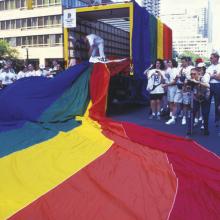 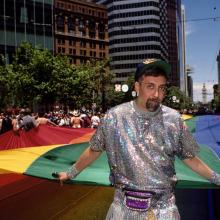 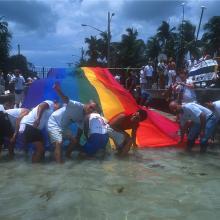 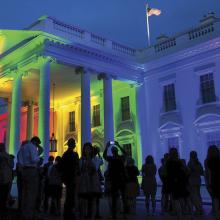