Games of Chance: Gambling Devices of the Mechanical Age

“Who hasn’t dropped a nickel in the slot of those seductive little machines to be found almost any place where men most do congregate?...They are located in nearly all the saloons and cigar-stores in the City, eating up nickels as fast as the ‘tiger’ (card game) can eat up dollars.”

Games of Chance: Gambling Devices of the Mechanical Age

A gambler transported from a turn-of-the-twentieth-century saloon in San Francisco’s Barbary Coast would easily recognize a modern slot machine in today’s casinos. Even with new materials and modern technology, the play concept has changed remarkably little in the more than one hundred years since San Francisco inventor Charles Fey introduced the first automatic-payout, three-reel slot machine—payment is inserted, the handle is pulled or the button is pressed, and the reels, now simulated, spin to a stop to determine the outcome. 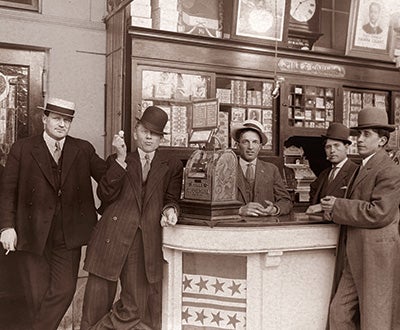 In no part of the world did gambling take place so openly and on such a large scale than in San Francisco during the Victorian era. The city’s residents were largely pioneers or one generation removed from those who risked all to relocate and gamble on a new life in the West. San Franciscans wagered in nearly every possible manner, including horse races, sporting contests, card games, wheels-of-fortune, and impromptu barroom arguments on every conceivable subject. At the beginning of the twentieth century, more than 3,000 machines operated freely, enticing customers from busy sidewalks into the saloons and cigar stores that proliferated throughout San Francisco.

While gambling machines were enormously popular, they also earned the scorn of critics. Social reformers targeted the devices as a destructive influence on families while hammer-wielding civic leaders regularly posed before heaps of the destroyed machines. To circumvent anti-gambling ordinances, the industry produced “trade stimulators” that awarded vouchers redeemable by an attendant for drinks or cigars, or vending devices that dispensed mints or chewing gum. Others came equipped with some form of skill feature and were prominently labeled “for amusement only.”

The overwhelming number of slot machines in San Francisco led to a citywide ban in 1909. The law was ignored for two years and the machines were then outlawed statewide. The Volstead Act of 1919 resulted in a nationwide ban on gambling devices that lasted until the repeal of Prohibition in 1933. A popular wave of anti-gambling sentiment developed again during the late 1940s, culminating in 1951 when Congress passed legislation preventing the shipment of slot machines across state lines. Like-minded state legislators seized on this momentum to pass anti-possession laws in every state except one. By the 1960s, slot machines were legal only in Nevada. In 1978, New Jersey became the second state to allow the machines when their legislature legalized usage in Atlantic City. In 1988, an Act of Congress made slot machines available for use in American Indian casinos, which now operate in twenty-eight states.

Today’s video slot machines, a reliable revenue source for casinos, lack the allure and ingenuity of their mechanical predecessors—the whirring drum reel, the noisy coin release into a pay cup, and perhaps most importantly, their distinctive design and craftsmanship. This exhibition illustrates the technological and artistic innovations of mechanical gambling machines—from the earliest devices relying on simple clock mechanisms and a payout by the bartender, to automatic slot machines with elaborate carved-wood, cast-iron, or painted-aluminum bodies—each vying for the attention of the next player willing to drop a coin and try their luck. 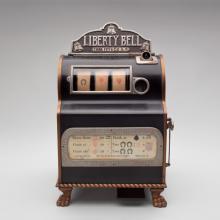 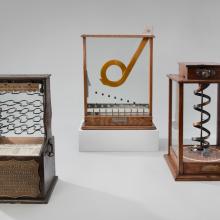 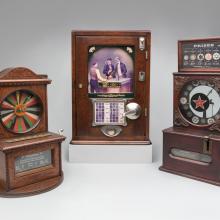 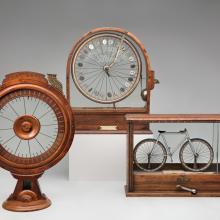 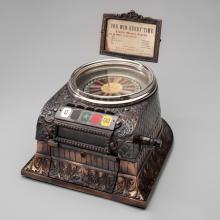 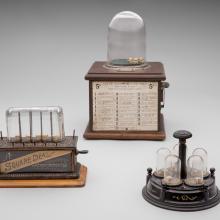 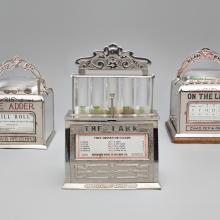 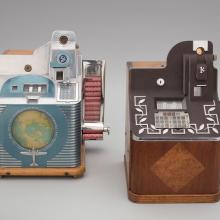 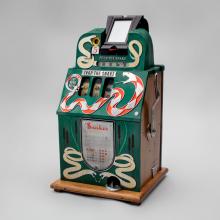 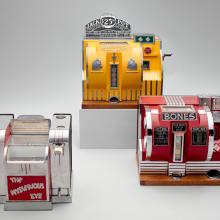 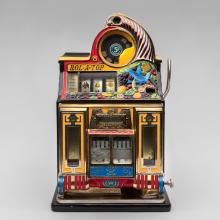