"The design of a pepper pot is as important…
as the conception of a cathedral."

Successful design provides the great diversity of forms in nearly every object that surrounds us— from the clothes we wear and the cars we drive, to the buildings we inhabit and the furniture we use. The Margo Grant Walsh Collection of silver and metalwork demonstrates the tremendous artistry employed in the design and craftsmanship of functional housewares and jewelry. Bracelets, brooches, bowls, serving sets, and salt and pepper casters are among the objects represented in nearly every design style from the late nineteenth century to the present. They reveal artists working in the style of their period, borrowing from earlier traditions, and pioneering new styles of their own. Viewed together, these well-designed objects reflect the unity of function and beauty that comes from all corners of the world and spans several generations of artists.

Pewter candlesticks made in a restrained Arts and Crafts style at the turn of the twentieth century are exhibited alongside the elaborate and structural forms of sterling silver candlesticks made more than a century later. The naturalism of a 1903 copper and brass Art Nouveau teapot from Germany presents a striking contrast to a Mexican modernist's interpretation in silver from 1940. Chinese saltcellars chased with scrolling dragons from the late nineteenth century share space with the vase-like forms and textured finishes of a pair of casters made in London in the late twentieth century. And a twenty-first-century Italian choker made from a single, ribbon-like band of silver demonstrates a remarkably different design approach than pendant necklaces intricately decorated with set stone from the early twentieth century.

From candlesticks to teapots, and from flatware to necklaces, a tremendous range of form and decoration is found in silver and metalwork from the dawn of modern design in the late nineteenth century to the present. These selections from the Margo Grant Walsh Collection demonstrate that talented designers and craftspeople are not hindered but inspired by the parameters of producing forms both beautiful and useful. They remind us that great design comes in a variety of forms, and they support the assertion made by playwright and poet Oscar Wilde at the turn of the twentieth century—"All beautiful things belong to
the same age."

This exhibition was made possible by the generous loan of Margo Grant Walsh. 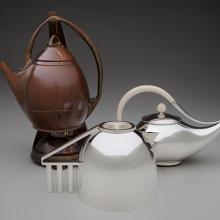 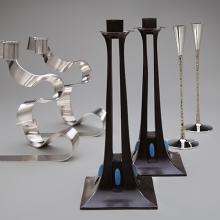 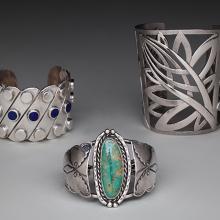 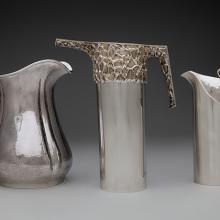 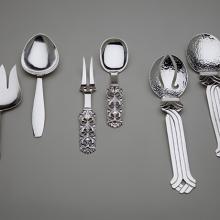 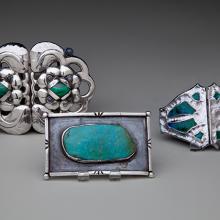 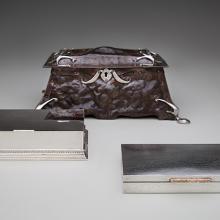 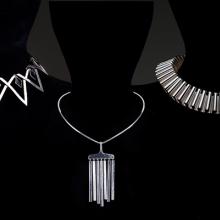 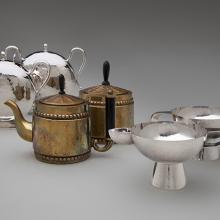