Imagine the excitement generated by the first man-made plastics. These moldable materials served as substitutes for dwindling supplies of natural plastics and precious materials such as tortoiseshell, horn, shellac, ivory, and even silk. Early plastics enabled manufacturers to introduce a host of affordable new products and allowed for tremendous technological advances.

American John Wesley Hyatt patented celluloid, a semi-synthetic plastic, in 1870 after trying to find an alternative to ivory billiard balls. Tortoise-colored hair combs, buttons, toiletry articles, piano keys, and even shirt collars were some of celluloid's many popular forms. By 1890, flexible, celluloid film revolutionized photography and was later used by the motion picture industry. Celluloid, however, had its shortcomings; it was flammable and could soften under heat. In an attempt to find an alternative electrical insulator to shellac, which derives from lac bug secretions, Belgian-born Leo Baekeland created the first entirely synthetic plastic, Bakelite, in 1907. The nonflammable material, capable of withstanding 100,000 volts of electricity, was hailed as “the material of a thousand uses.” Soon automobile parts, radios, telephones, cameras, and jewelry were molded from Bakelite.

Scientists continued to invent new types of plastics during World War II, while manufacturers and designers constantly found new uses for it. Following the war, in 1948, vinyl records became the standard in recorded music. Around the same time, Charles and Ray Eames created the first industrially manufactured armchair from fiberglass. The two focused on the affordable, new plastic because it could be molded into a variety of shapes and required fewer components than chairs made from traditional materials. Mid-century designers also worked with melamine, another new form of plastic, to create sleek, unbreakable dinnerware, which quickly became an attractive alternative to ceramics. Toys made from a variety of plastics appeared everywhere—from Mr. Potato Head to Barbie and Colorforms.

Early plastics also affected the textile industry. For centuries people dressed in clothes made from cotton, linen, wool, and silk. Experiments with silk replacements began in late nineteenth-century France. By the 1920s, viscose or rayon, a semi-synthetic fiber derived from plant sources, was used to make embroidery thread, trimmings, men's socks, and women's clothing. DuPont introduced nylon, the first completely man-made fiber in 1938. It was used to make everything from parachutes to women's stockings. Polyester, first patented in England in 1941, was offered in the United States by Dupont in 1950; it remains the most ubiquitous synthetic fabric.

More than a century has passed since the first plastics were developed. Plastics continue to play an important role in today's society. At the same time, consumers are now fully aware of the importance of using recyclable plastics. This exhibition explores one hundred years of classic plastics from the 1870s to the 1970s. Early celluloid vanity sets, eyeglasses, jewelry, radios, vinyl records, cameras, handbags, and mid-century furnishings are some of the many objects on display. 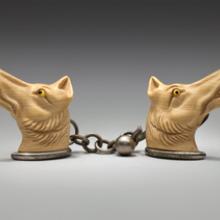 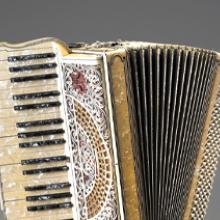 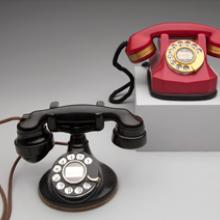 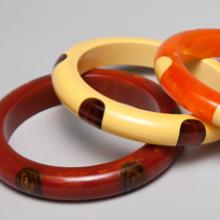 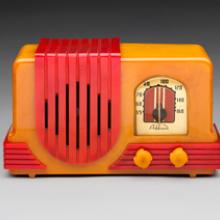 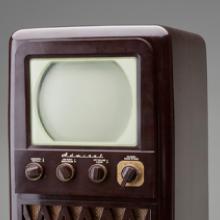 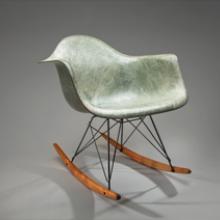 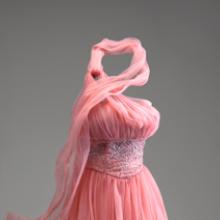 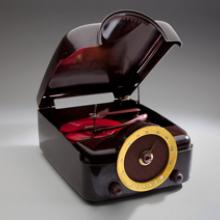 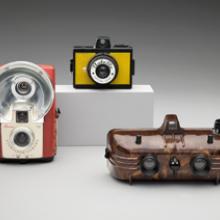 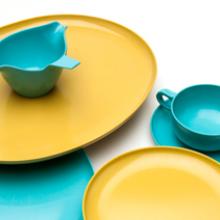