In the 1920s, aviation visionaries imagined how the nations of the Pacific Rim could be linked by a new mode of transportation, the aircraft. Governments encouraged the development of new air routes with lucrative airmail contracts and the Pacific arena was no exception. One of the key obstacles to this endeavor was the vast 2400-mile water gap between the coast of California and the Hawaiian Islands. To successfully traverse this distance and open the rest of the Pacific region for air travel, the U.S. Navy attempted a flight using two Naval Aircraft Factory PN-9 flying boats in 1925. One plane turned back, but the other, led by Commander John Rodgers, continued, only to run out of fuel about four hundred miles from Hawai’i. Commander Rodgers managed to complete the journey by stripping fabric off the wings and fashioning improvised sails. In 1928, an aircrew led by Australian Charles Kingsford Smith flew the modified Fokker F.VIIb Southern Cross to Hawai’i, then continued on to Fiji and, finally, to Brisbane, Australia. In the 1930s, the U.S. Navy developed a practical flight route to Hawai’i with a squadron of Consolidated P2Y patrol aircraft. making the journey. In 1935, Pan American Airways opened the first regularly scheduled air service flying the Sikorsky S-42 and Martin M-130 flying boats. With this obstacle surmounted, planners trained their eyes on a commercial air route to Oceania.

Upon forging an air route to Hawai’i, Pan American Airways began planning further air links to destinations in Asia, Australia, and New Zealand. Each of these employed the long range of large flying boats to link a chain of island bases along the way. The route to the south was planned to fly through Fiji and New Caledonia. However, the distance from Hawai’i to Fiji was over 3,000 miles, beyond the safe operating range of even Pan American’s largest aircraft. The solution was to establish a refueling base at the remote and barren Canton Island, an atoll in the Phoenix Islands, located 1,900 miles from Hawai’i and 1,200 miles from Fiji. After refueling on Canton Island, the aircraft flew either to Suva in Fiji or Nouméa in New Caledonia on their way south. Although Pan American Airways desired a route all the way through to Australia, negotiations between the governments and Britain’s Imperial Airways proved more difficult than anticipated. As a result, the transpacific route in the south terminated at Auckland, New Zealand. These incredibly long-range routes were surveyed using the Sikorsky S-42 flying boat and opened with the new Boeing 314 Clipper.

In the early 1940s, Pan American Airways established regular service to Auckland, New Zealand, with their Boeing 314 Clipper flying boats. Although this service was halted by the outbreak of World War II in the Pacific Ocean theater, the war years were transformational for transpacific air travel. Not only were new and improved aircraft developed, but a network of airfields were built across the Pacific basin as part of the war effort. In the late 1940s, land-based aircraft, like the Douglas DC-4 and the larger DC-6, made regularly-operated commercial air routes between the United States and Australia a reality for airmail and cargo, and for passengers as well.  Pan American was also finally able to obtain permission for their service to extend all the way to Australia.  Pan American was joined in flying these routes by Australian airlines like Australian National Airways (ANA), British Commonwealth Pacific Airlines (BCPA) and, later, Qantas Empire Airways. The route flown was the same as that pioneered before the war, using New Caledonia, Fiji, Canton Island, and Hawai’i as stepping-stones between Australia and the west coast of the United States. This route persisted through the propeller airliner era, even as newer aircraft like the Boeing 377 Stratocruiser were introduced.

In the late 1950s, jet airliners began to enter service for airlines around the world. These new aircraft revolutionized transpacific air travel with their high speed and longer range. Pan American World Airways and Qantas favored the Boeing 707 airliner for their long-range international routes. These planes did not need to stop as frequently and layovers in New Caledonia and Canton Island were no longer required. Regular, same-day air travel between the United States and Australia had been realized.

Today, these rare surviving airmail flight covers document how the air route across the Pacific Ocean was established during the 1920s and 30s, and then strengthened in the post-war era with the introduction of more advanced aircraft making non-stop travel between the United States and Australia a reality.

©2021 by the San Francisco Airport Commission. All rights reserved. 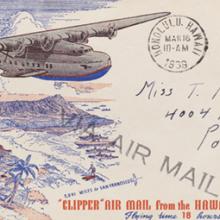 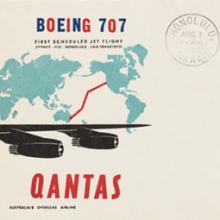 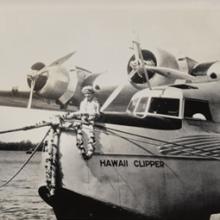 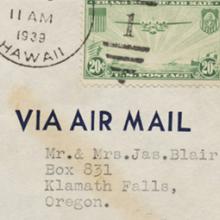 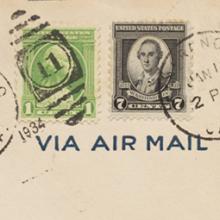 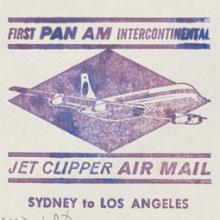