Transformation at the Aviation Museum & Library

We’re excited to report on changes underway in the San Francisco Airport Commission Aviation Library and the Louis A. Turpen Aviation Museum (AML), which, after a prolonged closure due to the COVID-19 pandemic, remains closed. However, the AML has not sat idle during this time: vinyl graphics cover the front windows and the northwest corner is hidden by a temporary construction wall while significant improvements and enhancements are completed. Frequent visitors to the AML know that it’s tucked away in the International Terminal, near the security checkpoint to Boarding Area A. The placement of a storefront between the busy checkpoint and the AML has kept the Museum relatively concealed. To improve passenger flow around and through the checkpoint, its surrounding area is being renovated. Among the changes are the removal of the storefront, widening of the checkpoint entrance, and creation of a spacious seating area. This space will be directly in front of new glass cases that will provide an additional gallery and allow passengers a direct line of sight into the AML. 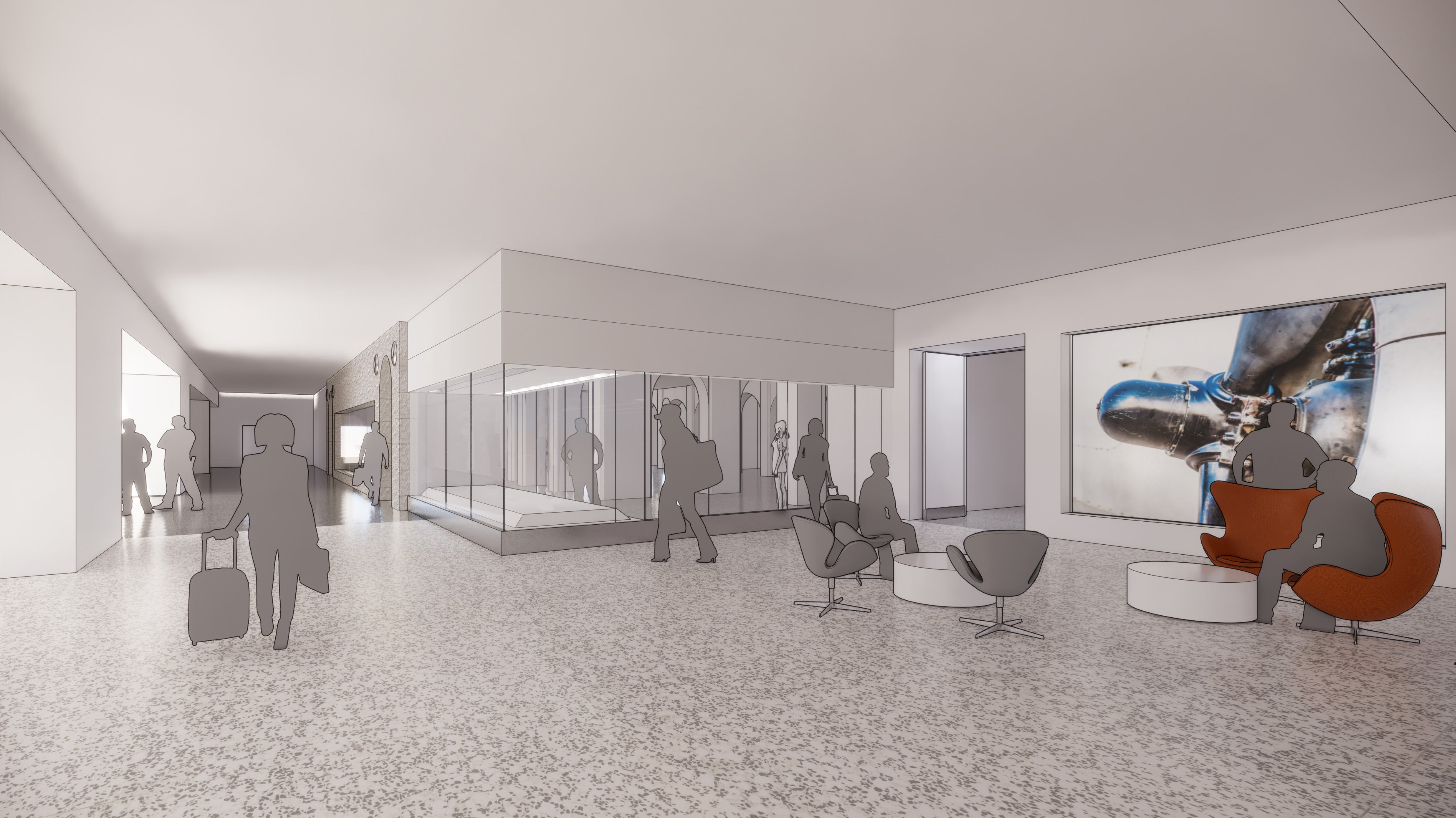 The vision of the aptly named “Museum Visibility Project” is to capture the attention and imagination of the traveling public. The core objective is to increase visibility and public access to AML programs and collections, provide additional program space, and attract more visitors to the facility, making the AML a must-see amenity at SFO. The additional gallery will expand public programming and showcase SFO Museum’s extensive permanent collection of objects related to the history of SFO and commercial aviation. 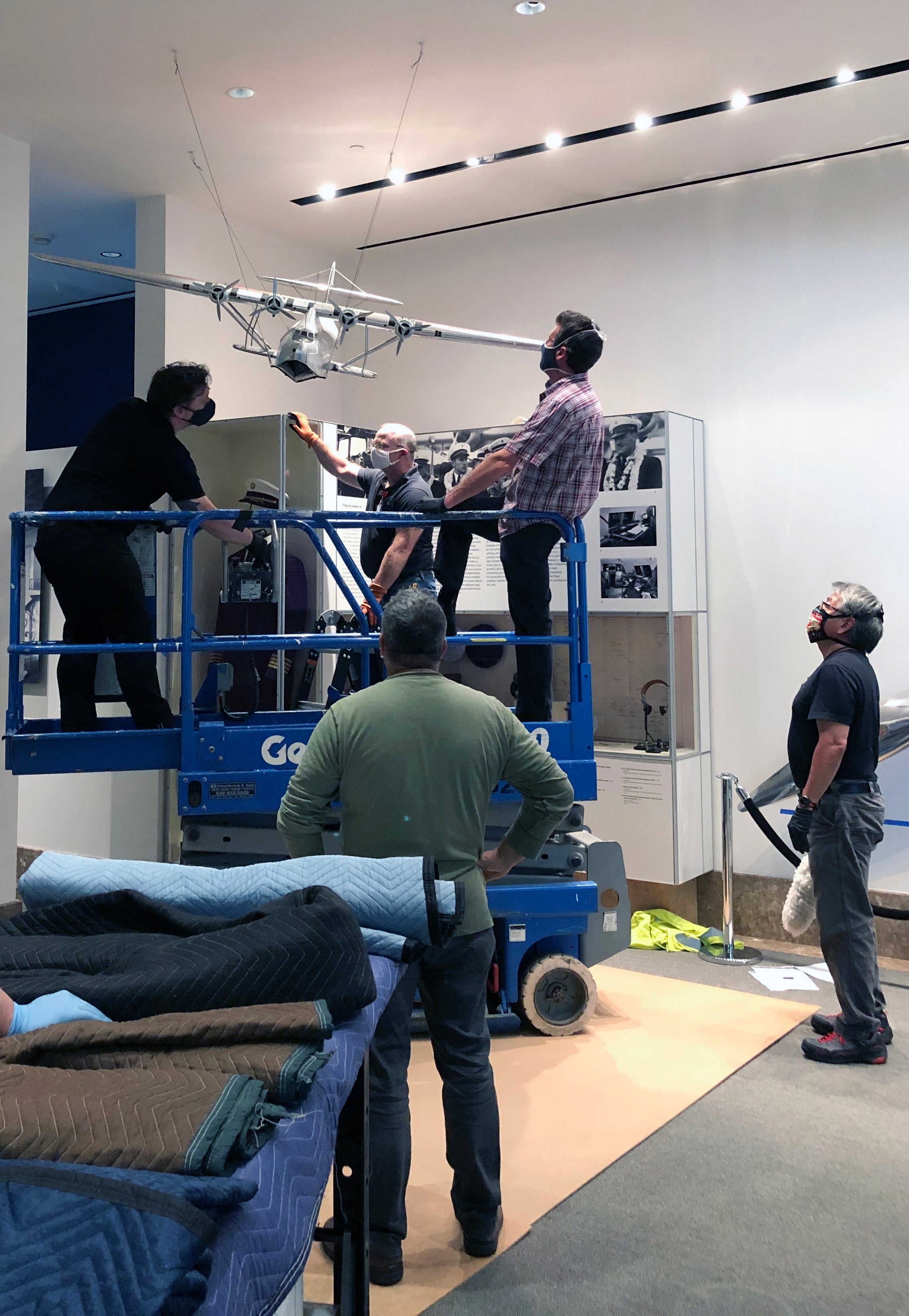 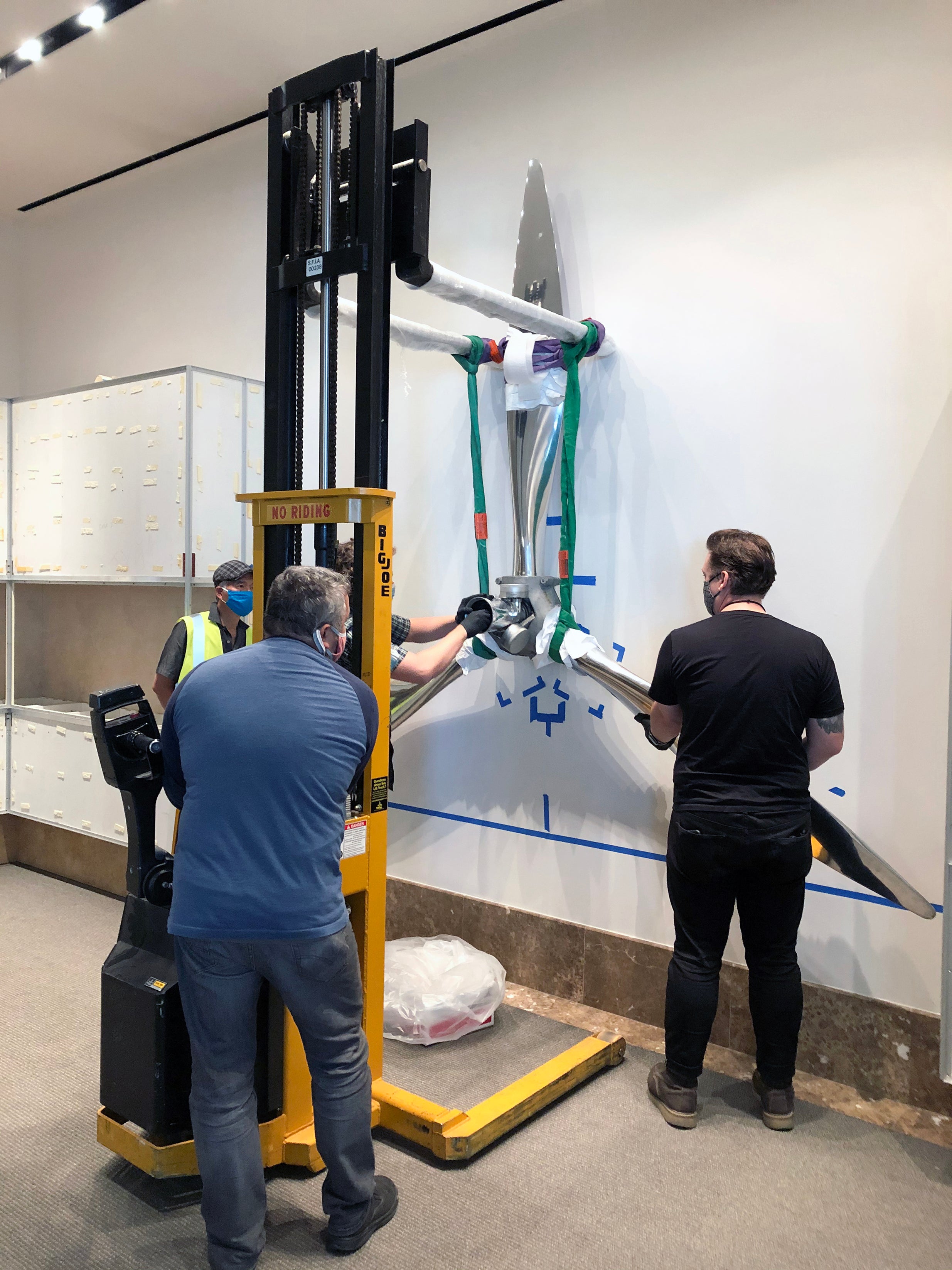 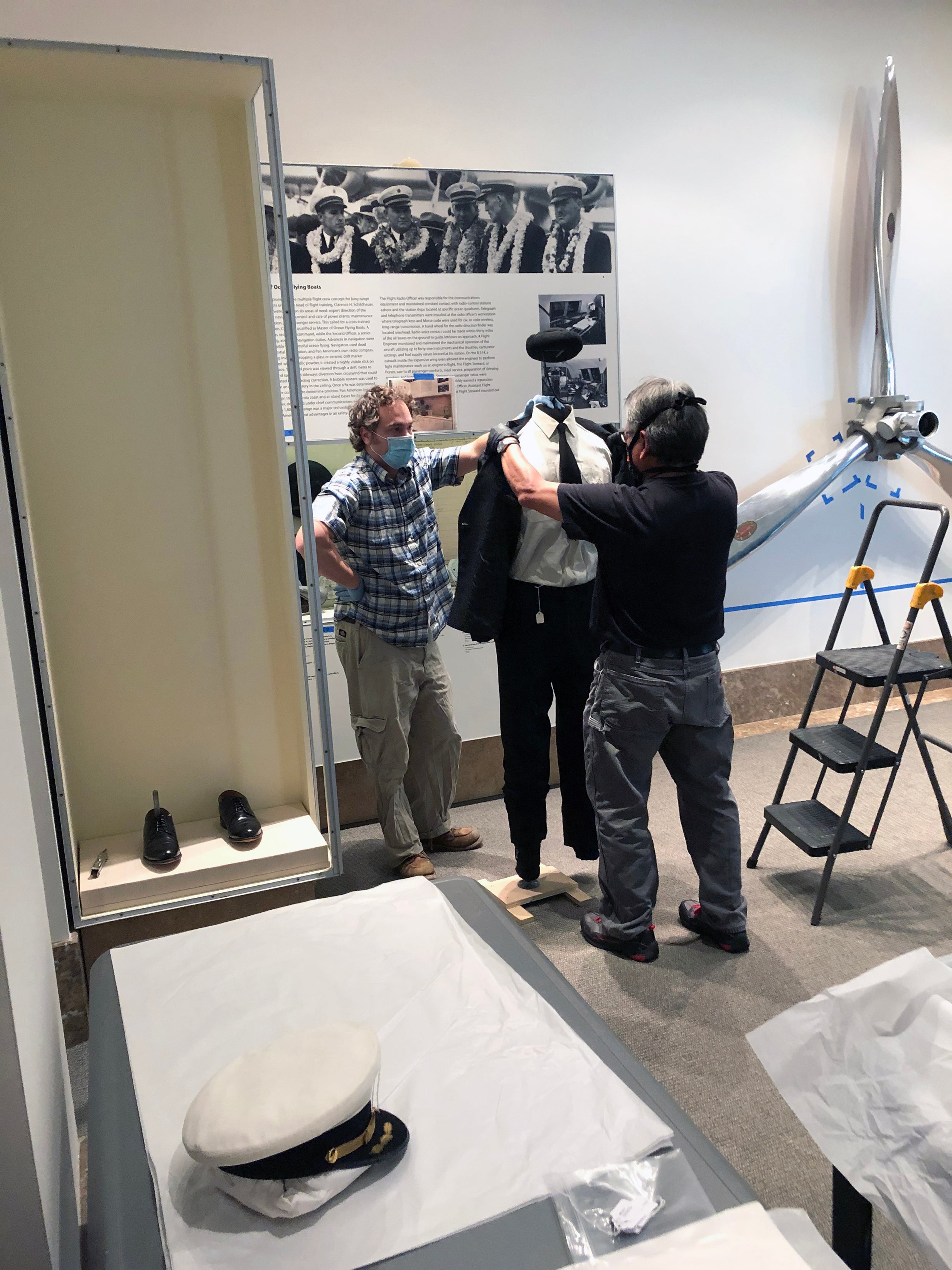 To prepare for the renovation, SFO Museum staff not only deinstalled the popular China Clipper exhibition, but also removed the display cases, took down model aircraft suspended from the gallery’s ceiling, moved the oversize Pan American Airways globe, and deinstalled the Hamilton Standard propeller. SFO Museum’s conservator has taken advantage of the accessibility of the deinstalled objects, inspecting and thoroughly cleaning them in anticipation of their eventual return to display. The prolonged closure of the AML also allowed SFO Museum staff the time to disassemble the Pan Am globe with the intent of repairing its motor; to have it rotating once again when the AML reopens. 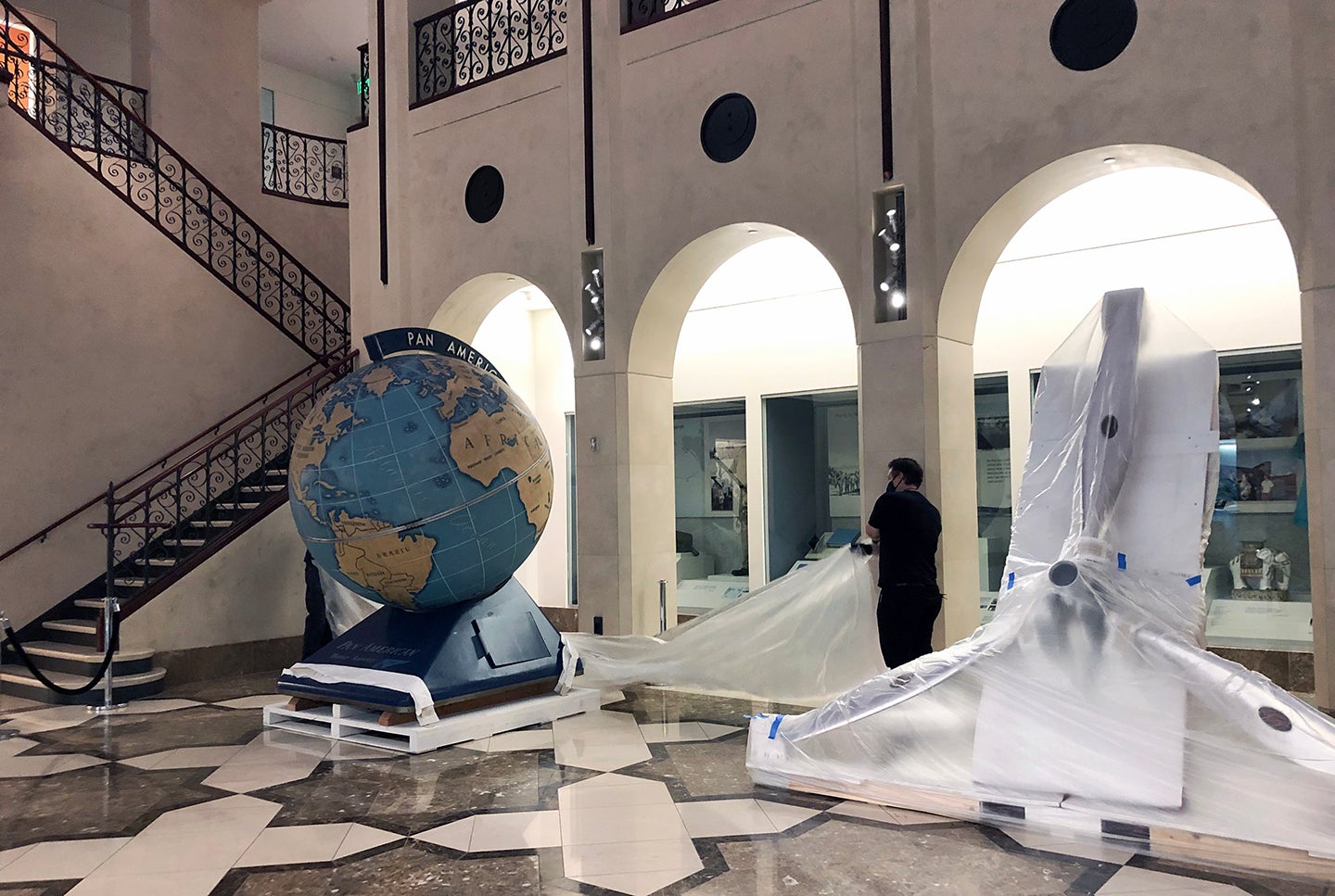 We’re thrilled to have the opportunity to reimagine the first impression the AML presents to new and returning visitors. Our inaugural exhibition in the new gallery will be a celebration of the engines and propellers that powered early endurance aircraft. Overall, the completed project will continue to enhance and improve the guest experience at the Airport, as well as meet SFO’s mission to provide an exceptional airport in service to our communities. The Aviation Museum & Library looks forward to welcoming you back when it reopens this winter.