Safe Landings: A Deinstallation in the Terminal

One of the many responsibilities of our Collections team at SFO Museum is to facilitate the deinstallation of exhibitions and museum objects throughout San Francisco International Airport (SFO). With a steady rotation of approximately thirty exhibitions per year on a broad range of subjects—from popular culture to commercial aviation—Museum staff regularly manage and maintain the various exhibition spaces located within SFO’s four passenger terminals.

Recently, we were tasked with the takedown of eight of the Museum's largest model airplanes from the hub ceiling of Terminal 3. As a museum embedded in an airport open twenty-four-hours a day, we are continually presented with unique obstacles. It’s part of what makes SFO Museum such a fun place to work! What was the primary challenge for this project? These models were in an active terminal, hanging twenty-five feet in the air, located directly over a food court and a major pedestrian thoroughfare linking eighteen boarding gates to the security checkpoint and baggage claim. It took many hours of planning and two days and one night of onsite maneuvering. A team of twelve Museum and Airport staff members applying an enormous amount of creativity and teamwork made the takedown a success. Here’s a quick snapshot of how the process unfolded... 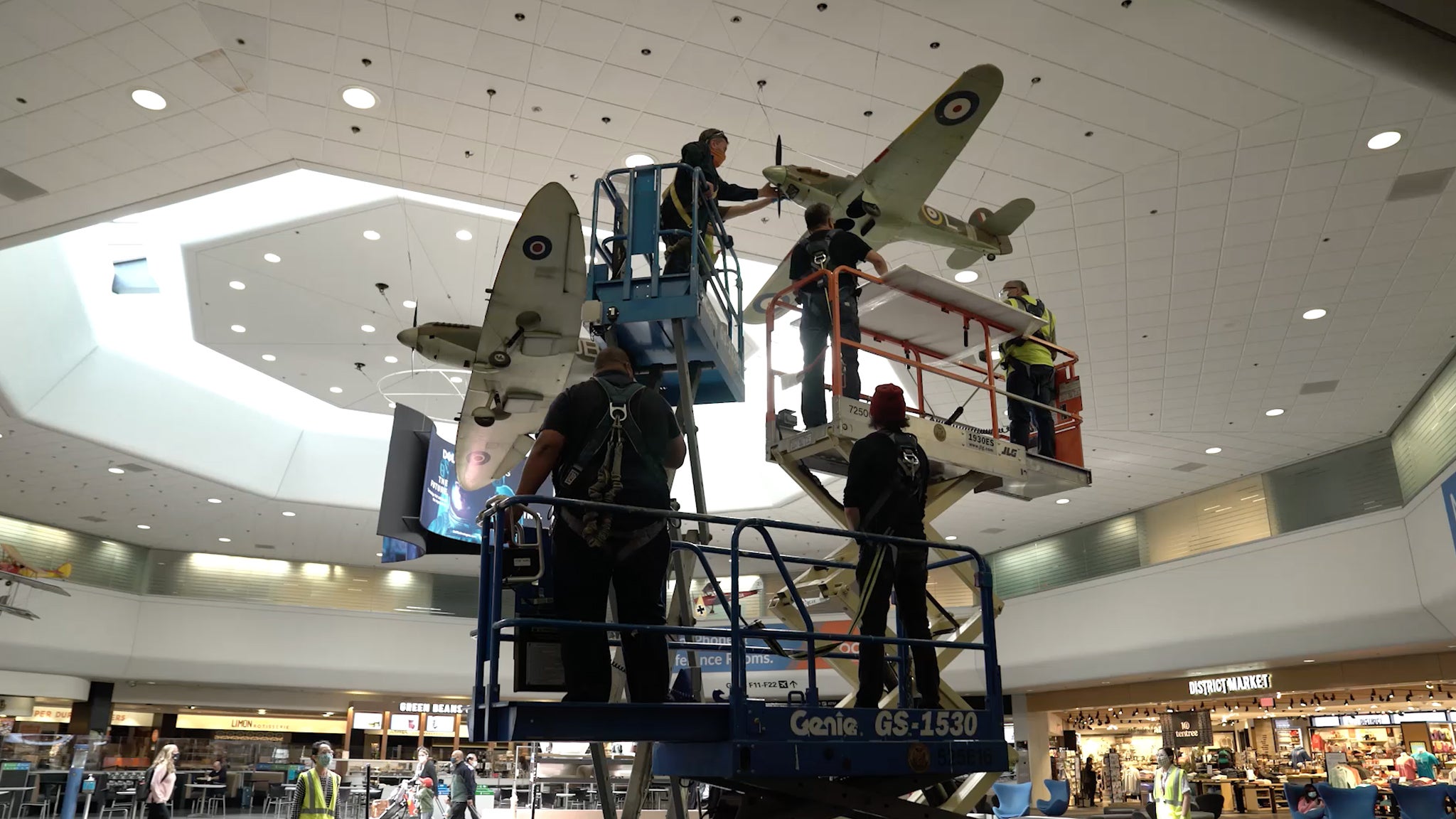 It all starts with setting a perimeter below the models that are coming down that day with traffic cones and caution tape to ensure the safety of our travelers and the museum objects. Continuing this safety-first approach, six of the crew, who have received training for lift operation and safety protocol, don their harnesses and gear up with the tools they will need to cut the models down. After strategically positioning three lifts around a model and ascending two stories into the air, two of the crew snip the hanging wires, freeing the models from the ceiling, while the remaining four teammates bring the model to rest on the lift. Slowly lowering the lift back down to ground level, the handlers are mindful to protect the plane from unnecessary turbulence, as bumps and aggressive jostling could result in damage to the delicate wings and details of the model. 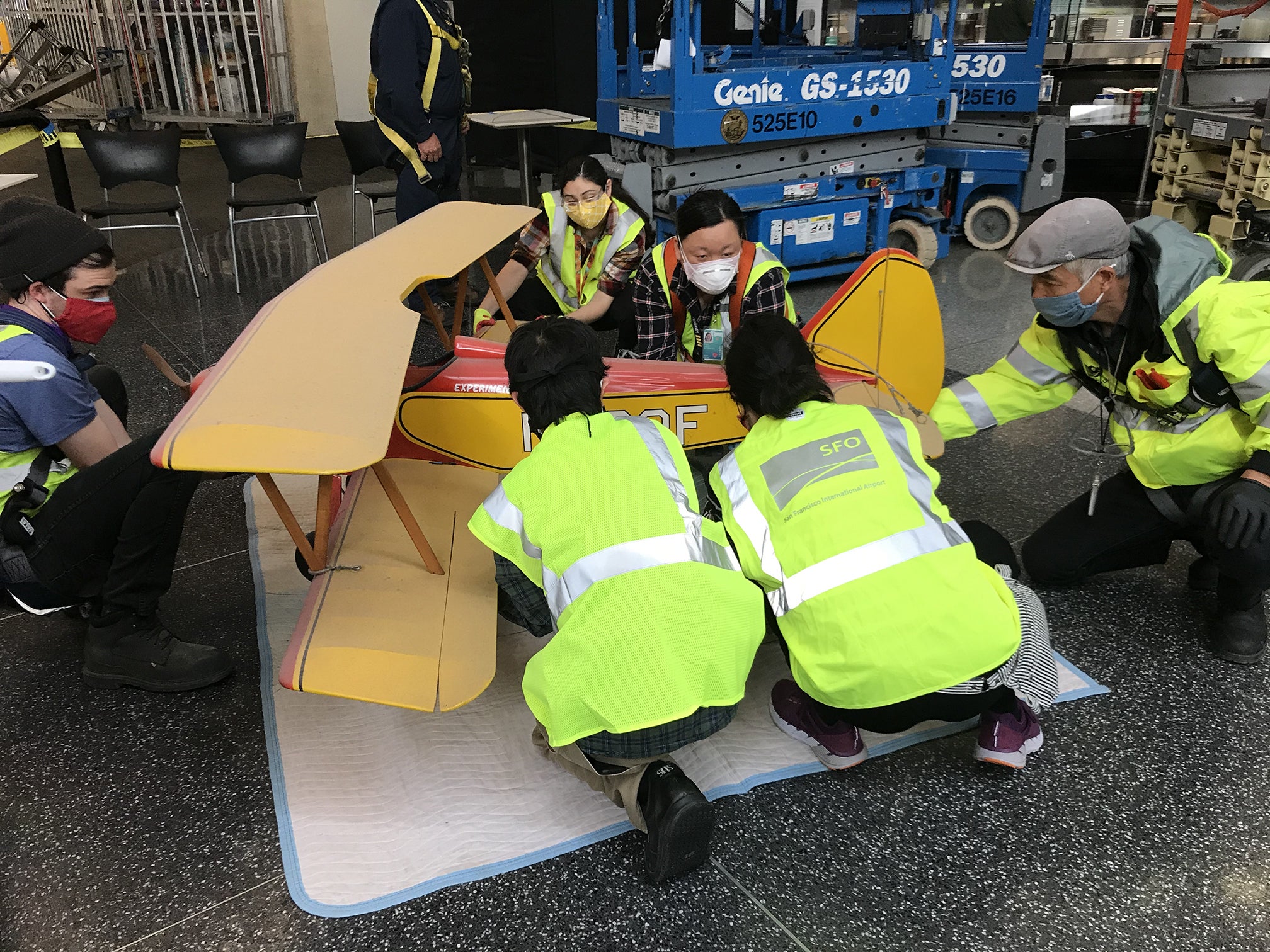 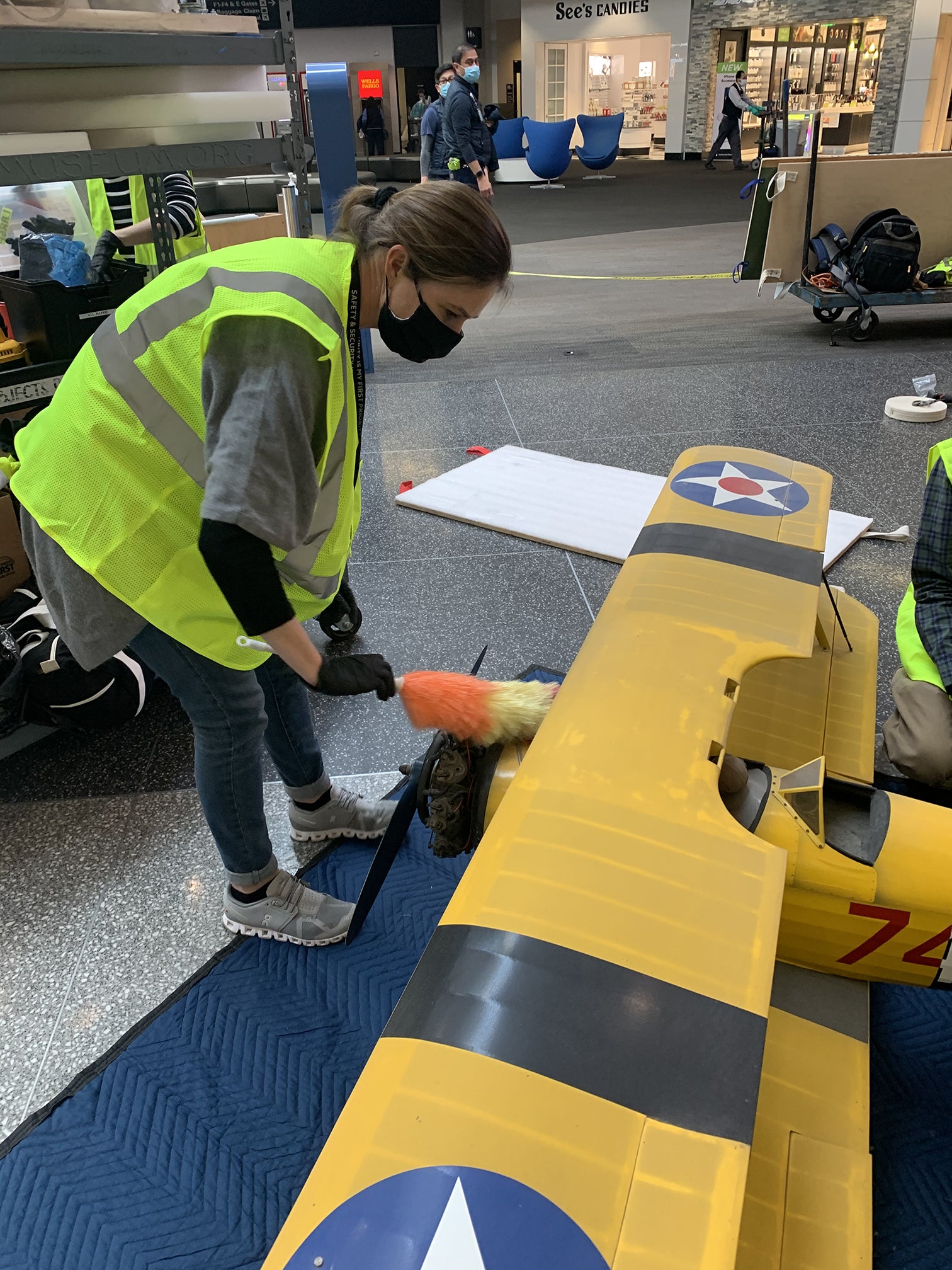 When each plane is safely on the ground, the rest of the crew gets to work, giving the planes a proper dusting and thorough vacuuming, assessing their condition for potential conservation needs, removing any remaining wires, and detaching the wings from the fuselage. Once a model is prepped, the technicians secure the plane to a custom-made gurney with foam-lined webbing straps, supporting delicate areas like the landing gear and wings with rolled moving blankets and foam blocks to avoid unnecessary stress on the model. 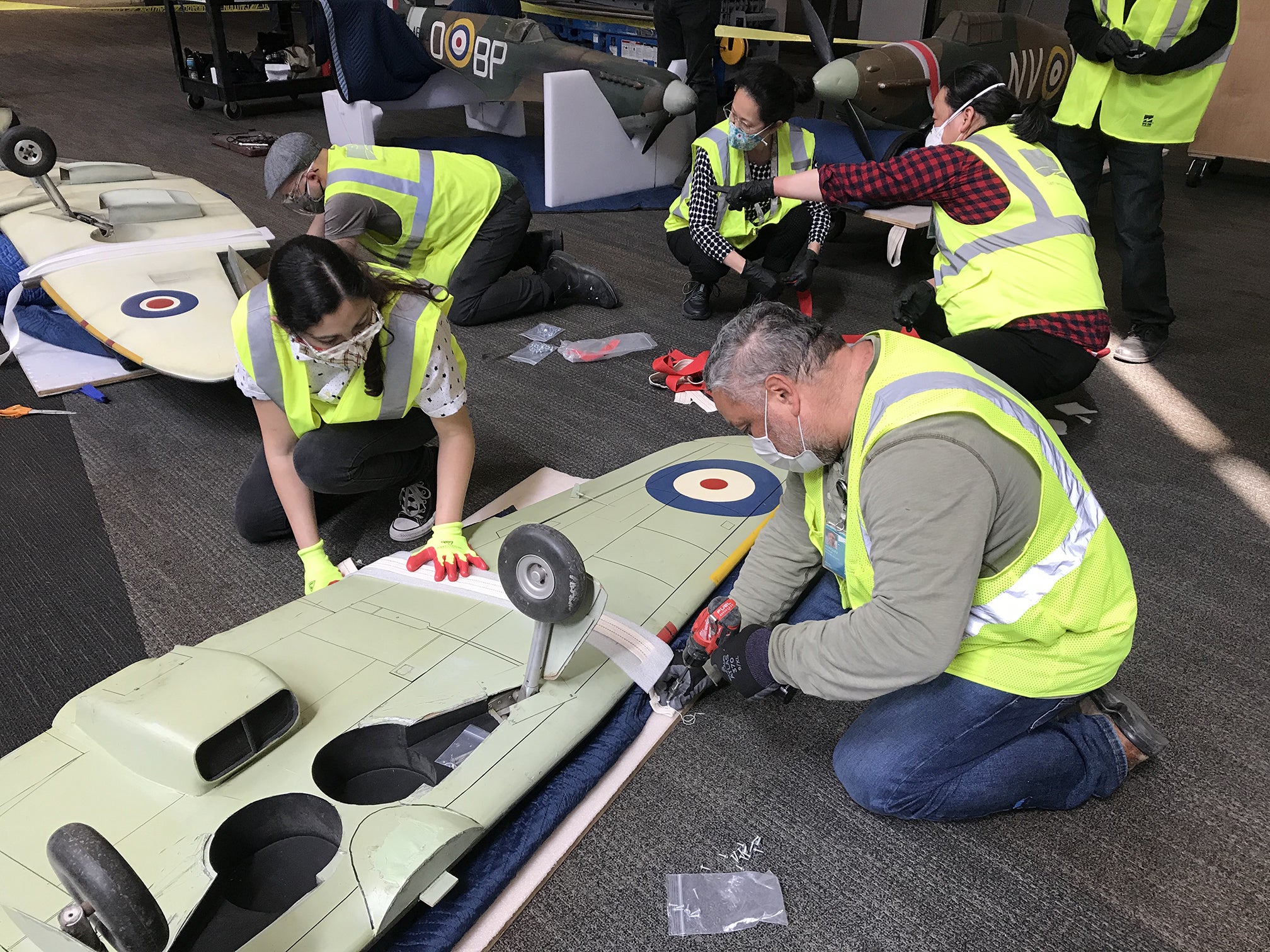 From here, the team can easily wheel the model on a cart through highly trafficked areas or carry the gurney by hand through narrow doorways and corridors on route to their next destination. 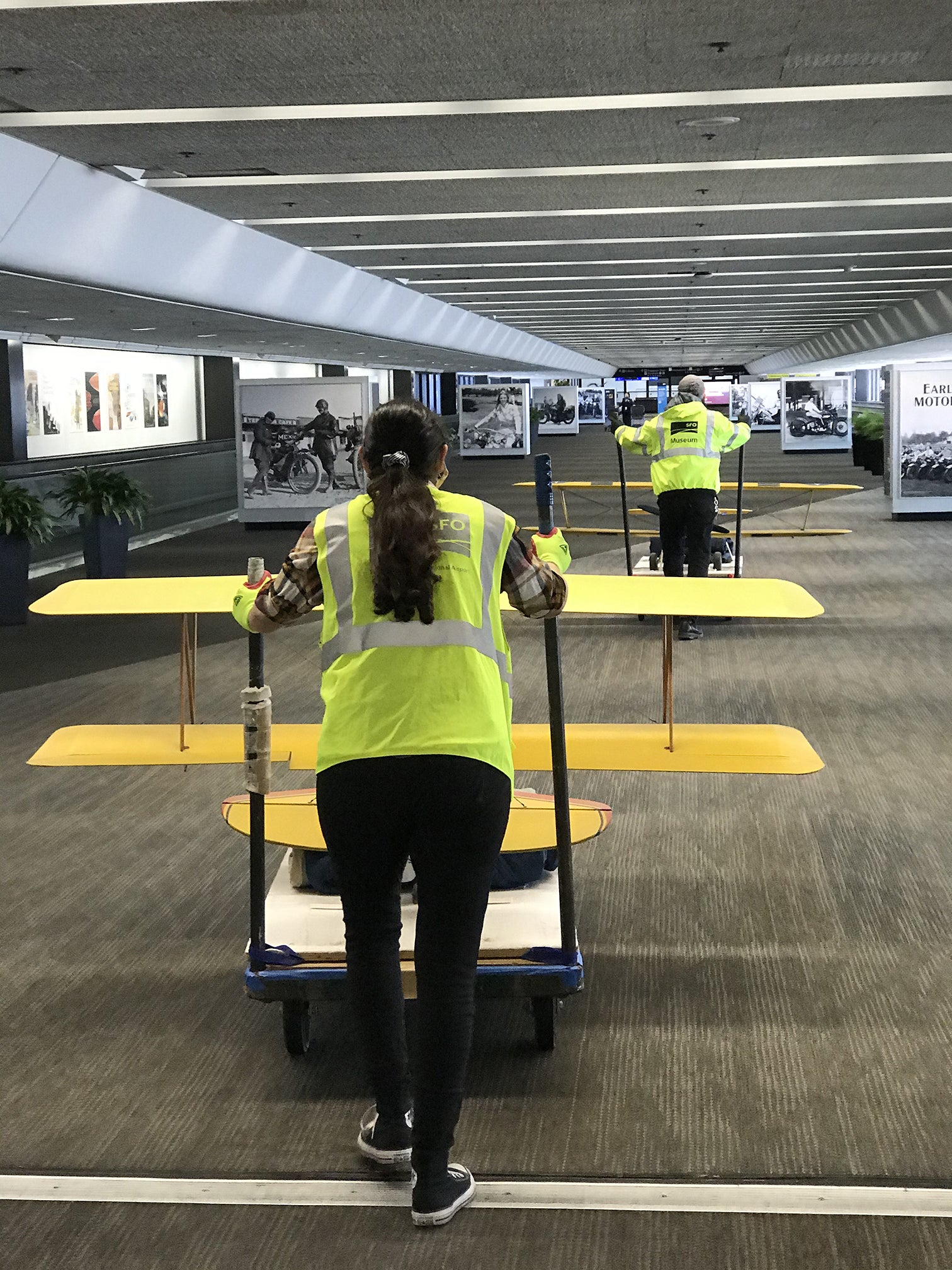 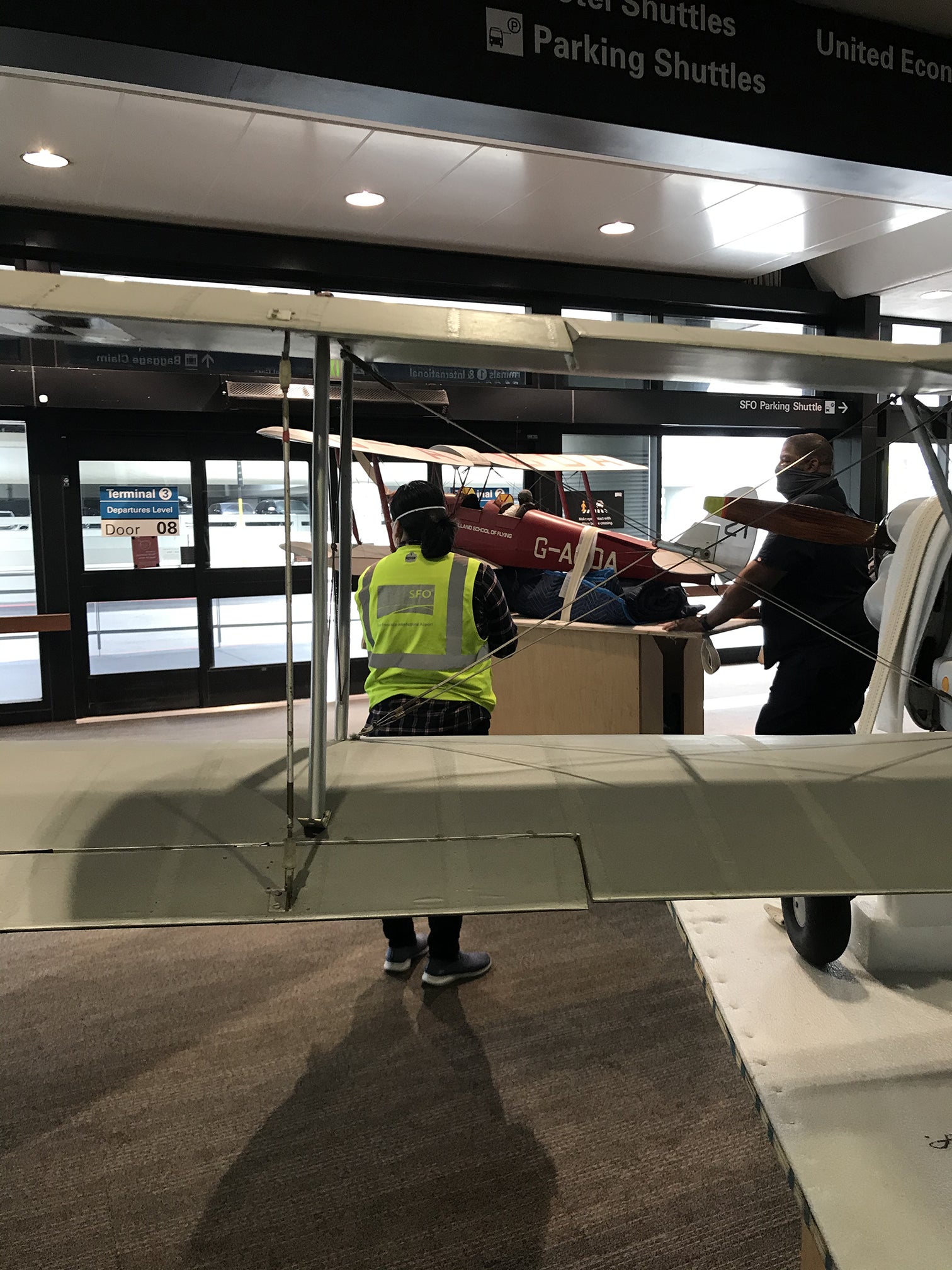 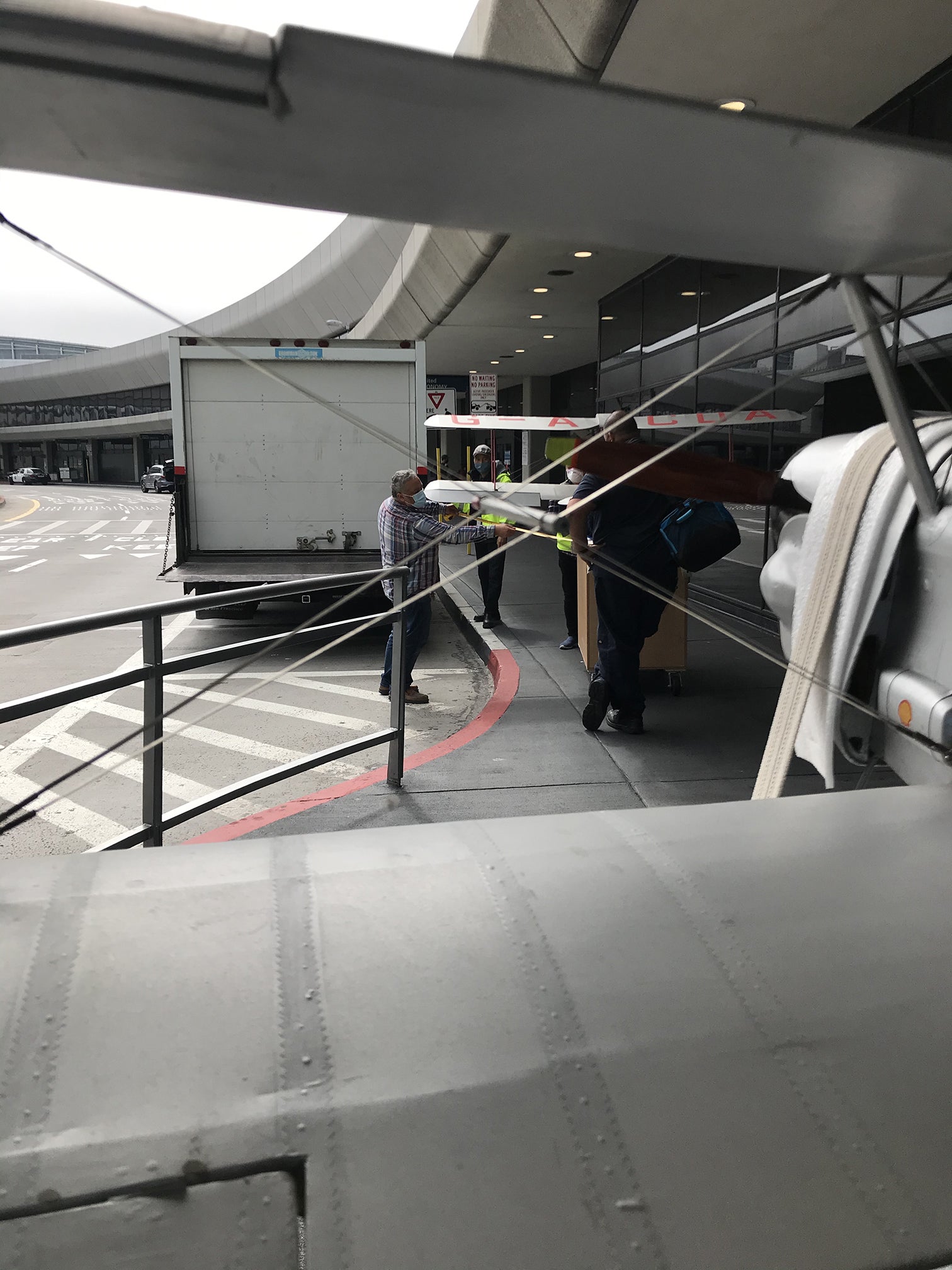 [images]
From start to finish, the project requires advance preparation and coordination with various Airport departments

In the end, the takedown is a great success. All eight models are safe and sound, enjoying a little R&R before their next adventure. The same goes for the crew.