Over the last thirteen years I have had the pleasure of working for SFO Museum as an aviation curator. I develop and produce aviation exhibitions for the Louis A. Turpen Aviation Museum and other SFO Museum galleries throughout the terminals. This includes conceiving exhibition topics and storylines, selecting and researching exhibition objects, and writing exhibition labels. I also help grow our collections through acquisitions and donations. Over the years, I have often been asked if I have a favorite airline artifact in our collections. Easily at the top of my list is a very large-scale, incredibly detailed cutaway model.

The Rollison Family generously donated this unique, 1:10 scale cutaway model of a United Air Lines Douglas DC-8 jetliner to the Museum. United had the model created to promote the airline’s first jet “Mainliner” service to the public. It was made by Pacific Miniatures in Alhambra, California, around the time of the DC-8’s introduction in 1959. The model was shown at New York International Airport (now JFK) and while there, it appeared in a United promotional feature, Jet Mainliner Flight 803. The film is about a nonstop United DC-8 flight from New York to San Francisco. Later, the model was displayed at SFO.

The movie can be viewed through Periscope Film on YouTube here. 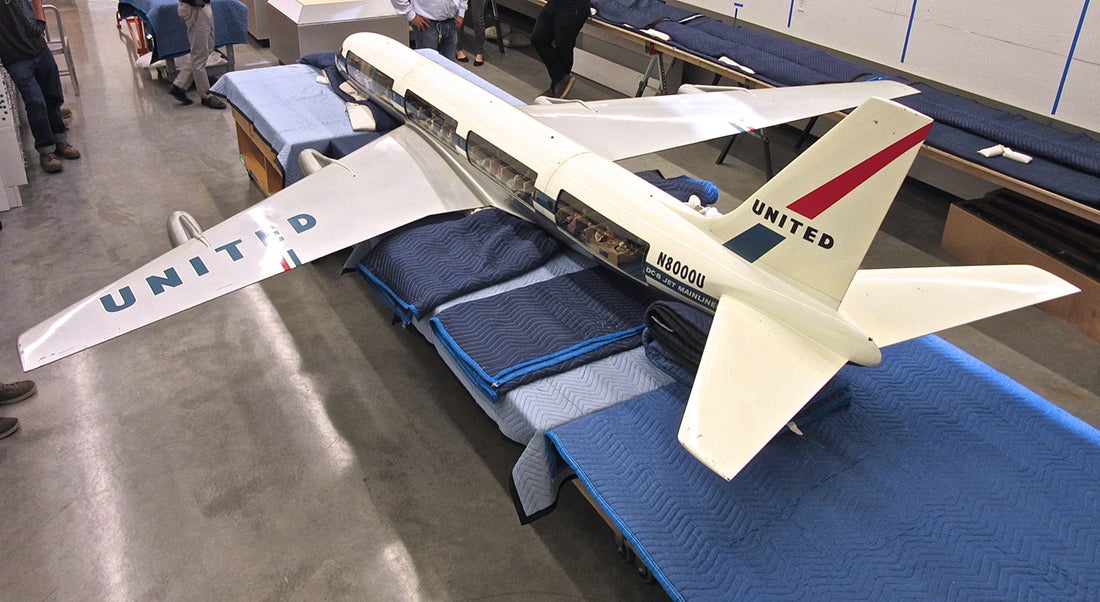 Douglas began developing the DC-8 jetliner in the mid-1950s as a competitive design to Boeing’s 707 jetliner. United’s president William A. “Pat” Patterson (1899–1980), decided to purchase the DC-8 primarily due to the airliner’s slightly larger cabin dimensions compared to the 707. Amid the competitive market of the airline industry at the time, Patterson saw the DC-8 as an opportunity to create a roomier and more comfortable signature flight experience for United’s first entry into the jet age. 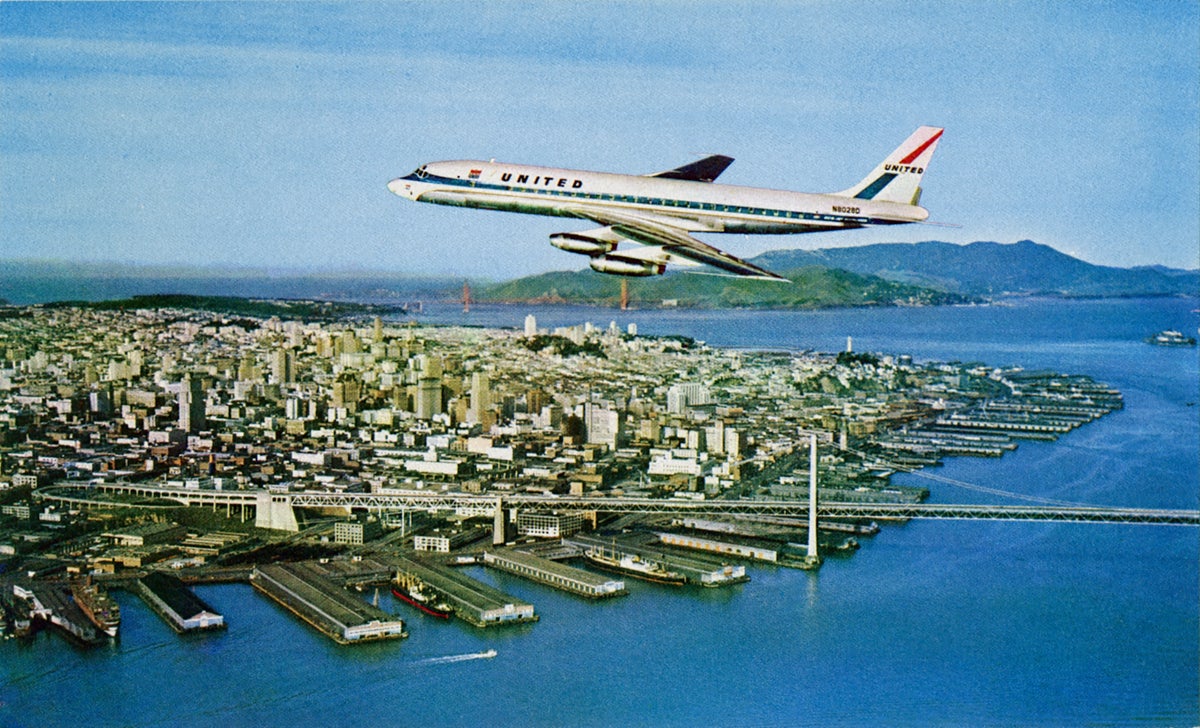 What I find truly amazing about this model is the amount of details Pacific Miniatures craftsmen put into the cabin interior. I have worked with numerous cutaway models in my career. This interior is one of the most highly detailed I have ever seen in a model. Our skilled photographer Chad Anderson captured many of these details with photographs that make you feel as if you are inside the cabin among these minute creations, many of which accurately replicate features of the actual aircraft. These include carpets, seats, bulkheads, curtains, murals, and tables, all in similar colors, patterns, and configurations to those designed by renowned industrial designer Raymond Loewy (1893–1986) for the United DC-8. 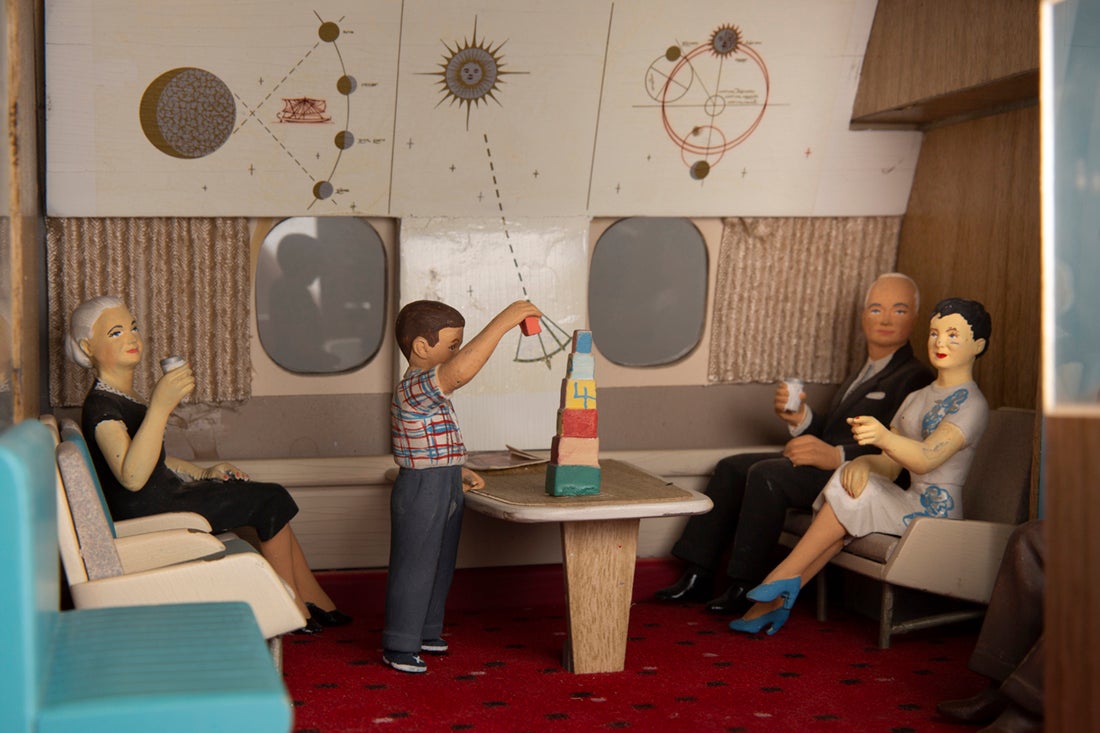 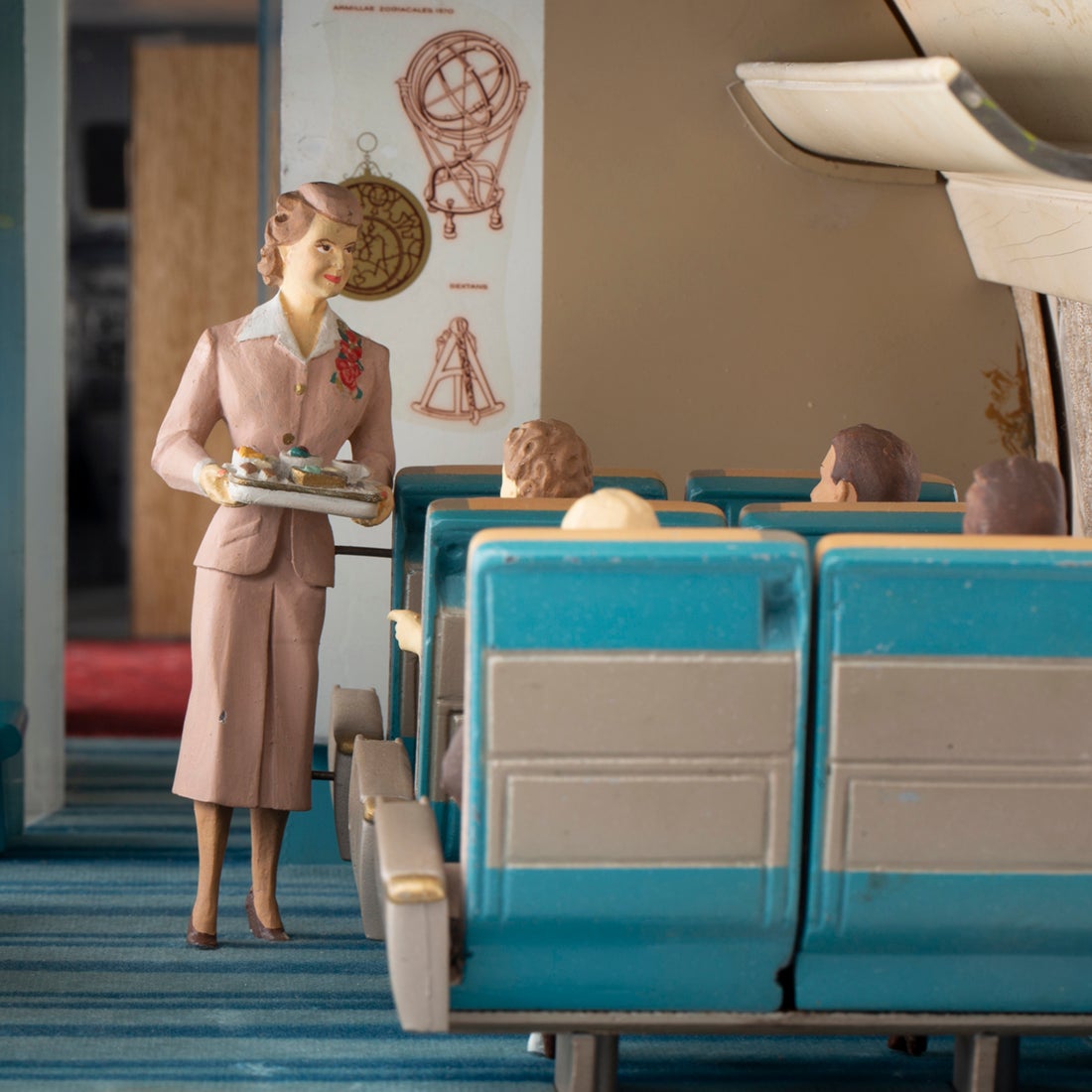 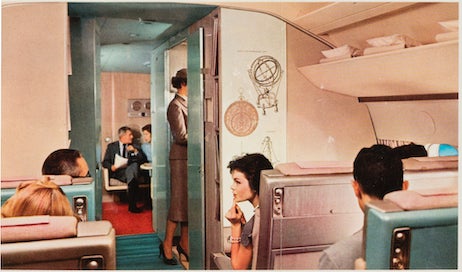 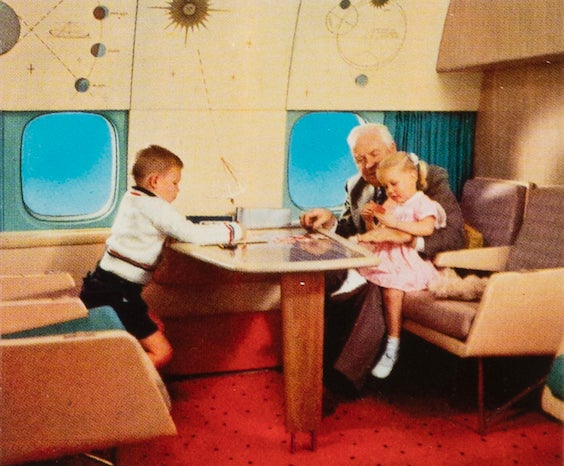 Even more remarkable are the uniquely crafted figurines. They present an incredible snapshot in time at the eve of the jet age of commercial aviation. Their facial expressions and body and limb positions give the illusion of movement and realism—I can imagine them moving around the cabin as if in a Claymation movie. The stewardesses look polished in their Loewy-designed winter uniforms, which were introduced in 1959. Happy and content passengers portrayed throughout the cabin conduct various activities, including dining, knitting, playing cards, and reading newspapers and magazines. Women figurines wear dresses and shoes in the fashion of the era, and male figurines wear suits and pointy dress shoes. Customary in the late 1950s, when people flew, they dressed in their finest clothes. Many flew for the first time.

I’d also like to point out that all these figurines are portrayed as white with no racial or ethnic diversity, revealing the exclusionary practices and context of the airlines and the era in which they were made. 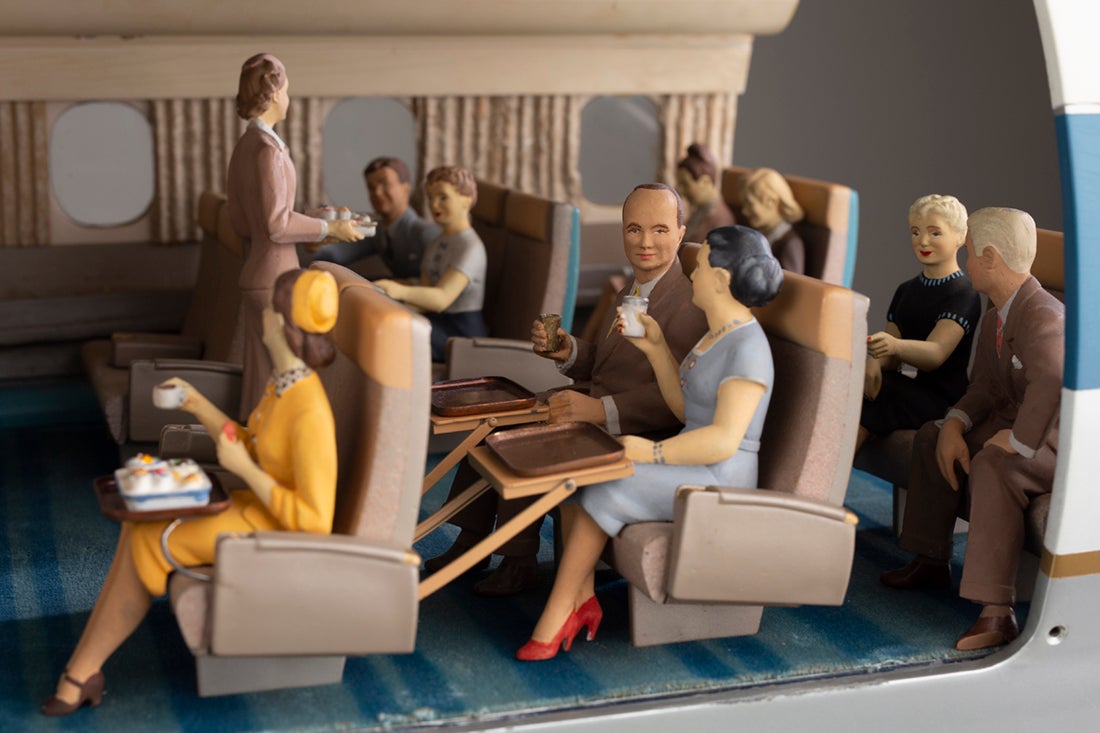 [image above]
The first class cabin during meal service 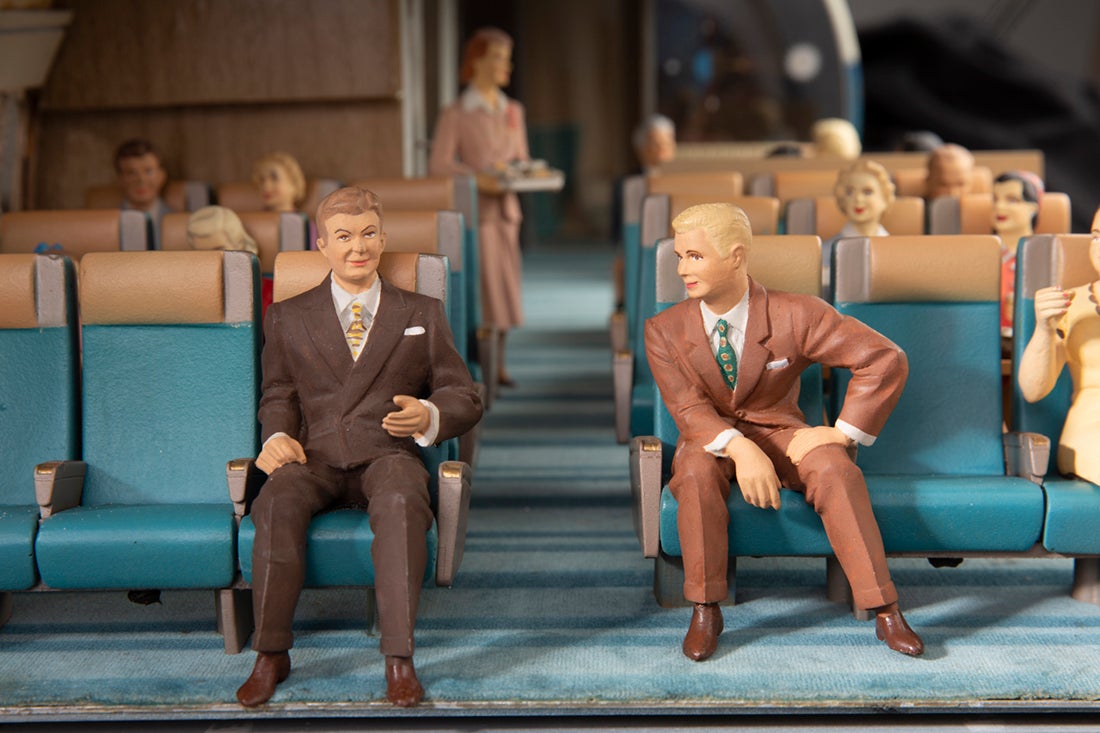 [image above]
Two men converse in the coach cabin 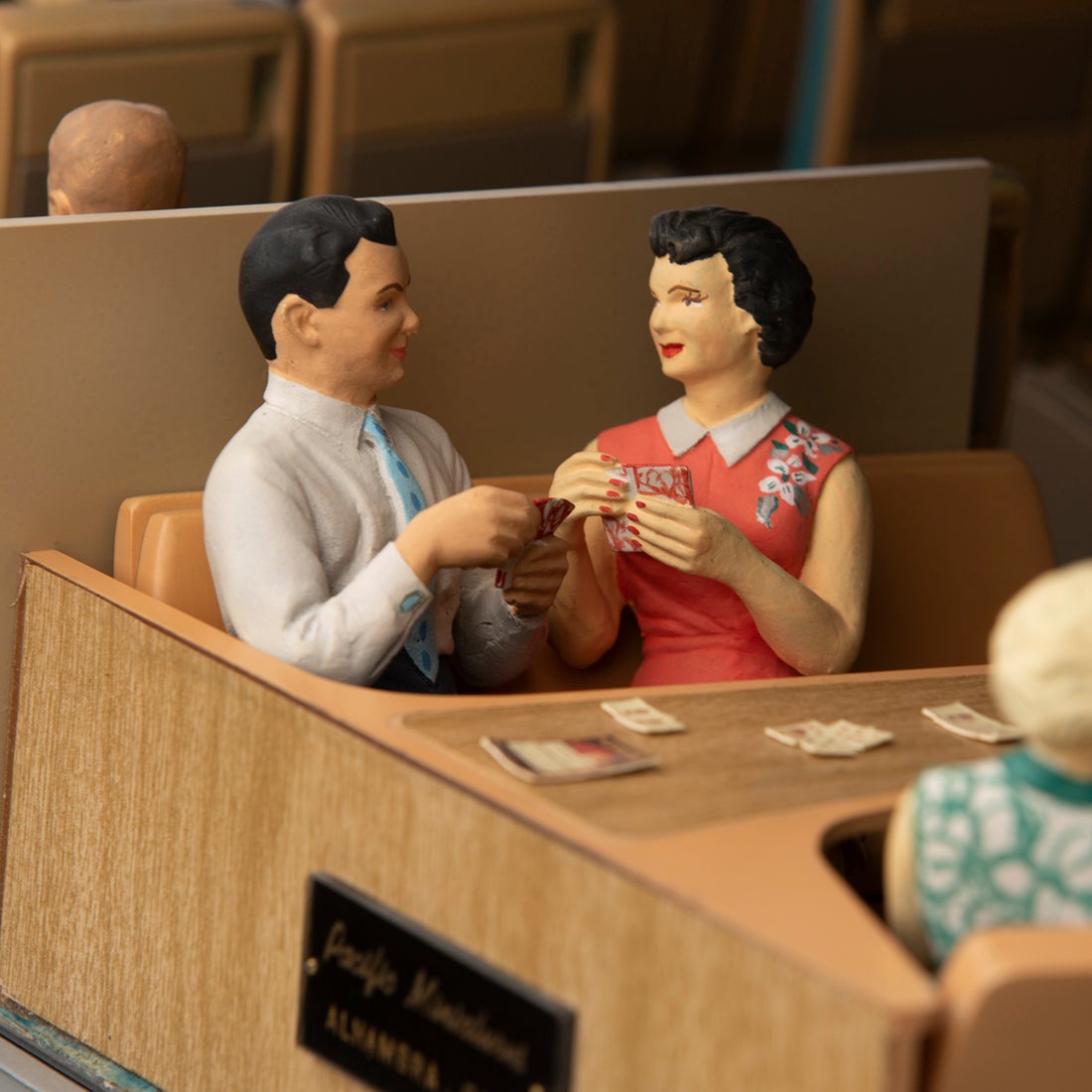 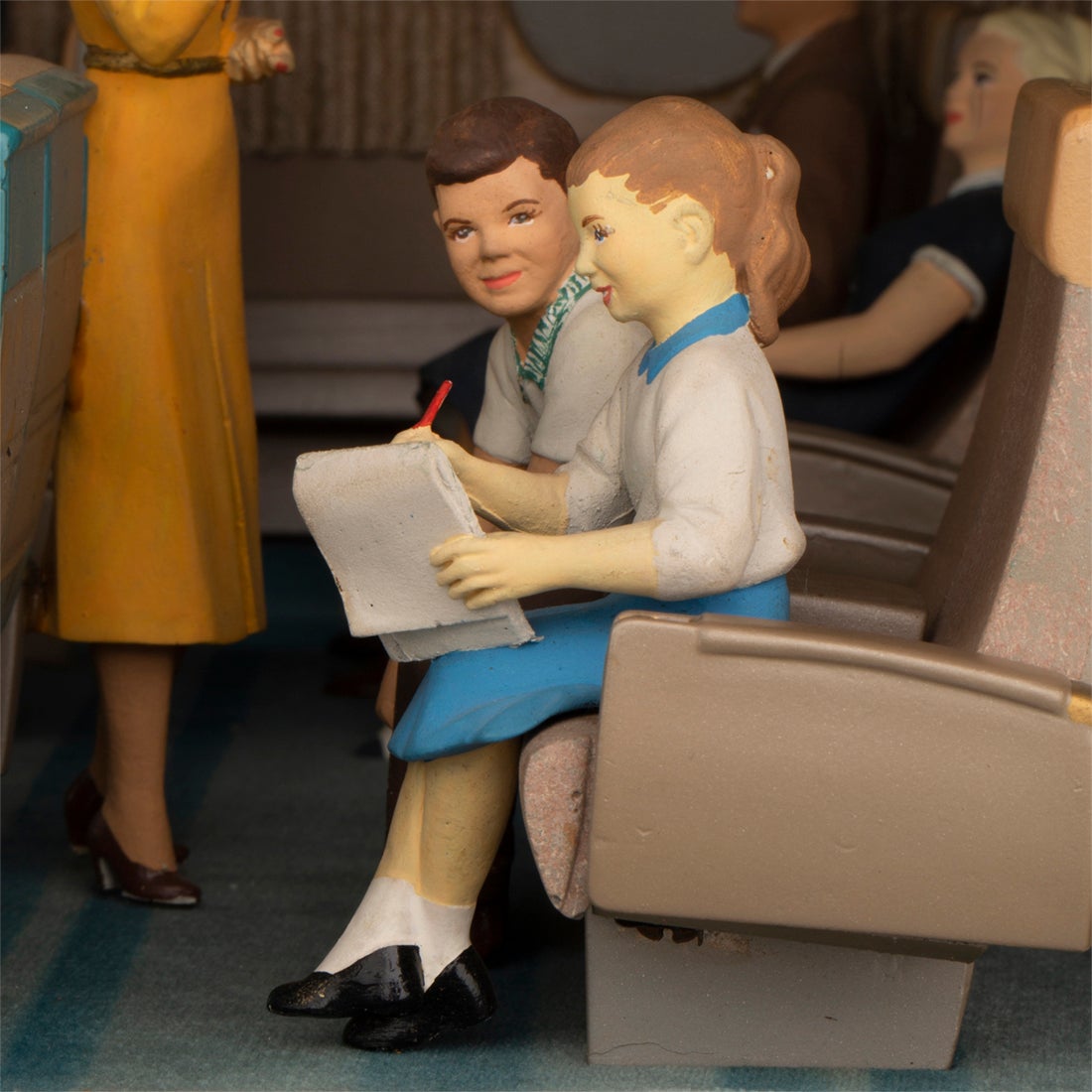 [images above]
Playing cards in the coach lounge; the Pacific Miniatures’ label is attached to the table’s side | Children seated in the first class cabin 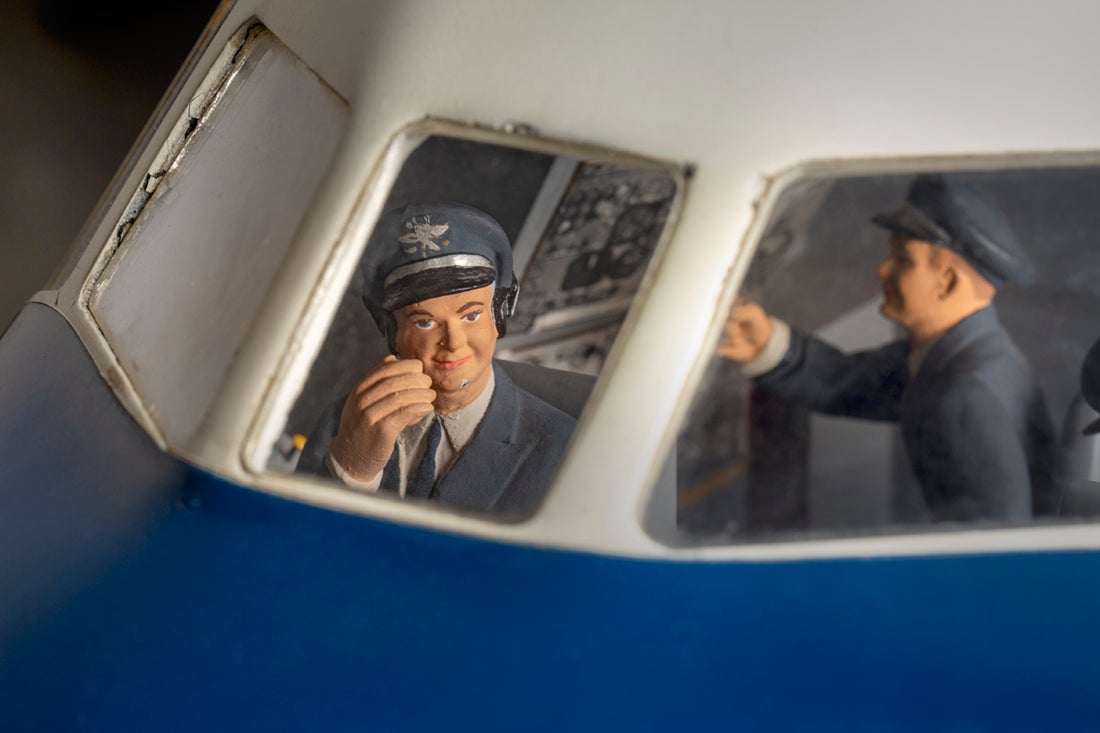 [image above]
From the cockpit, the captain addresses the passengers

I hope you enjoyed a look into this fascinating model’s transporting interior. We look forward to sharing it with the public in a future exhibition at SFO soon.