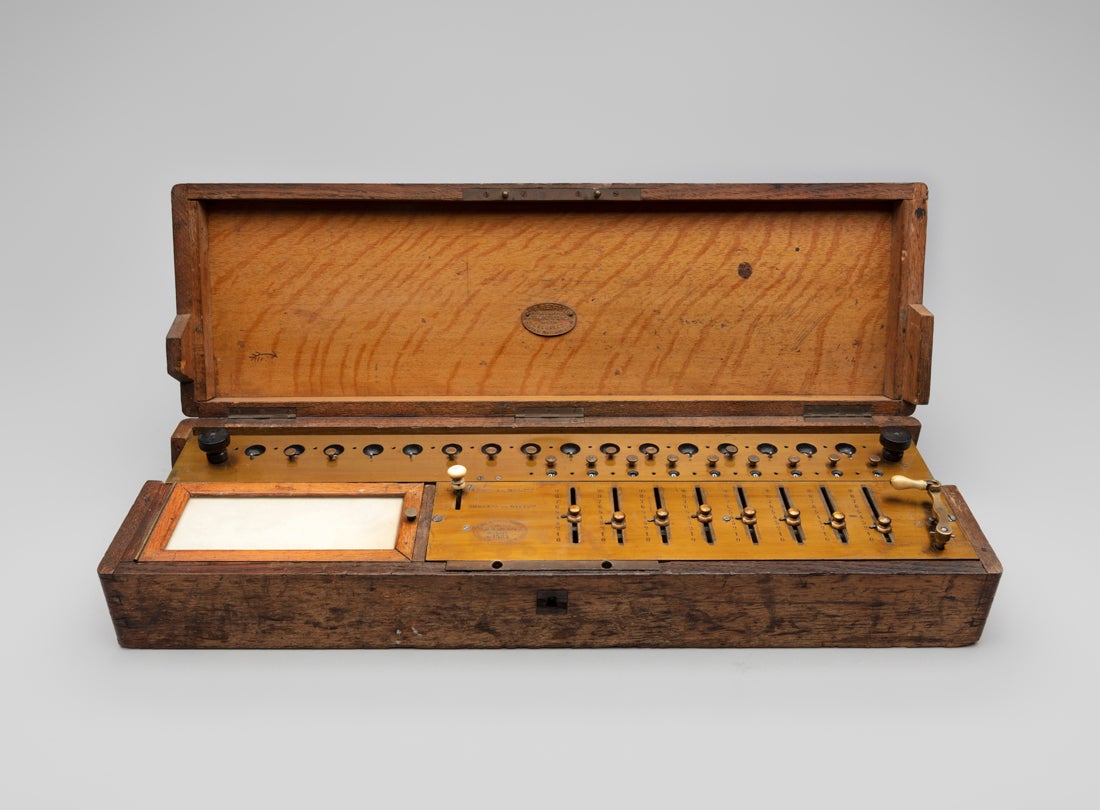 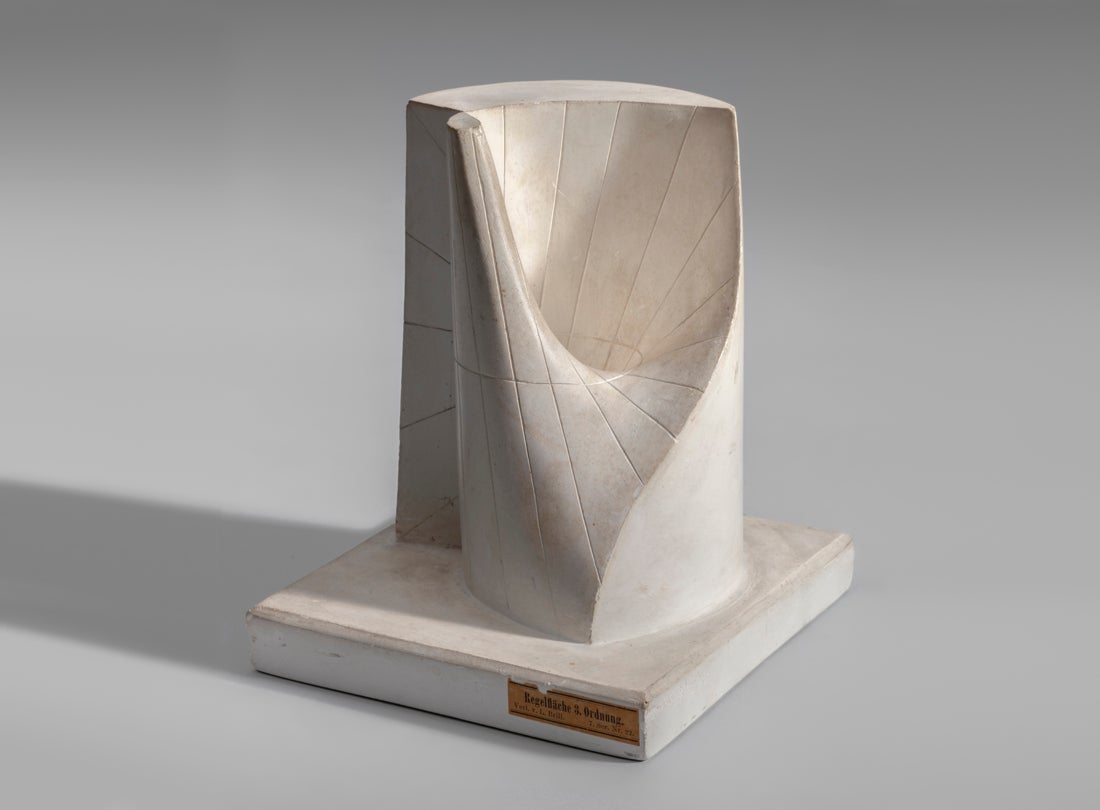 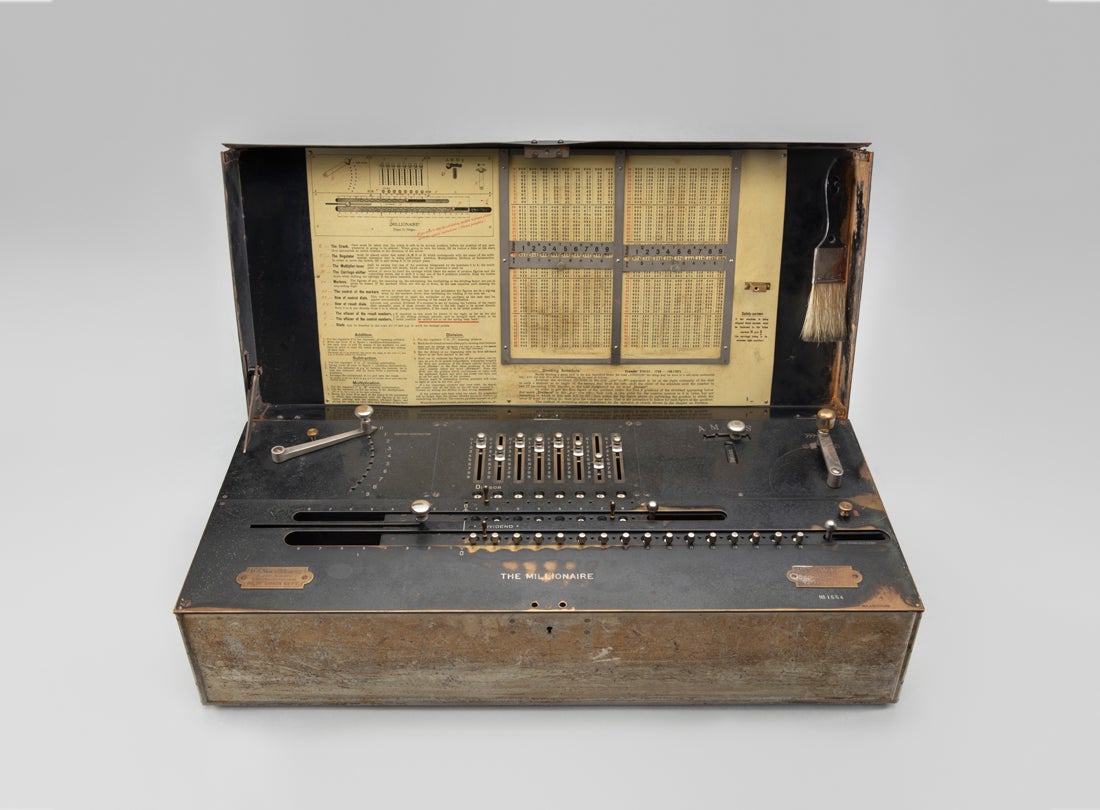 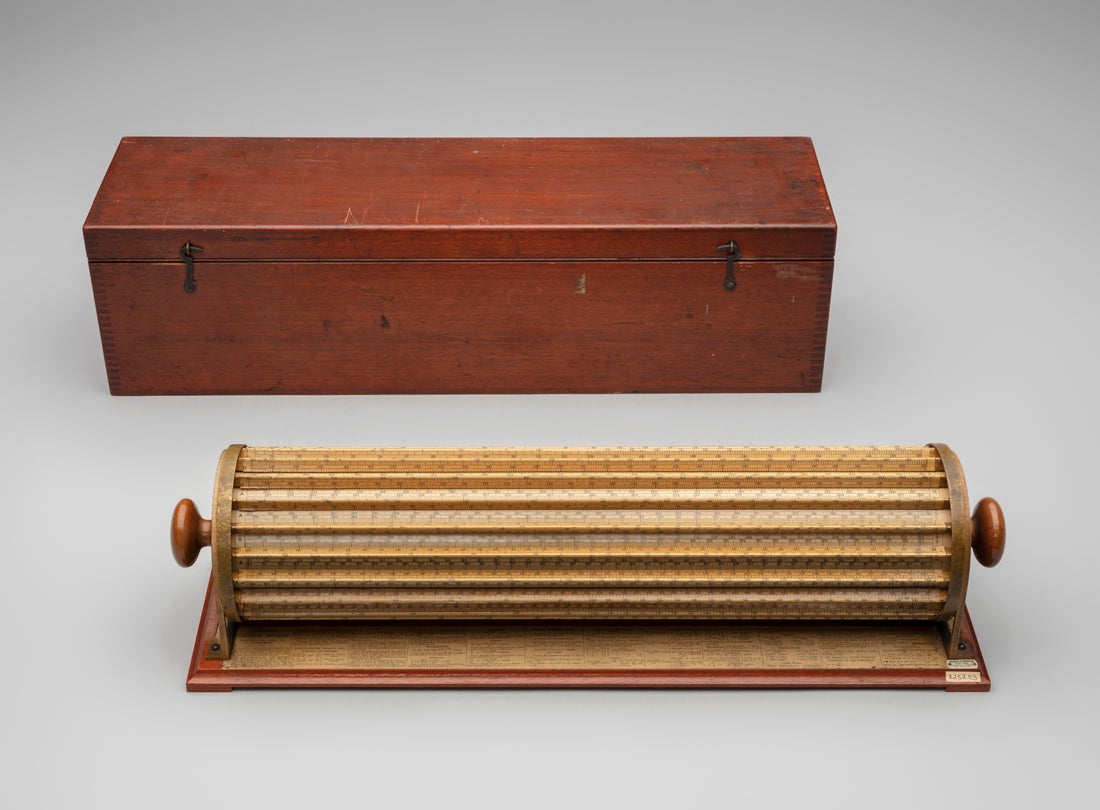 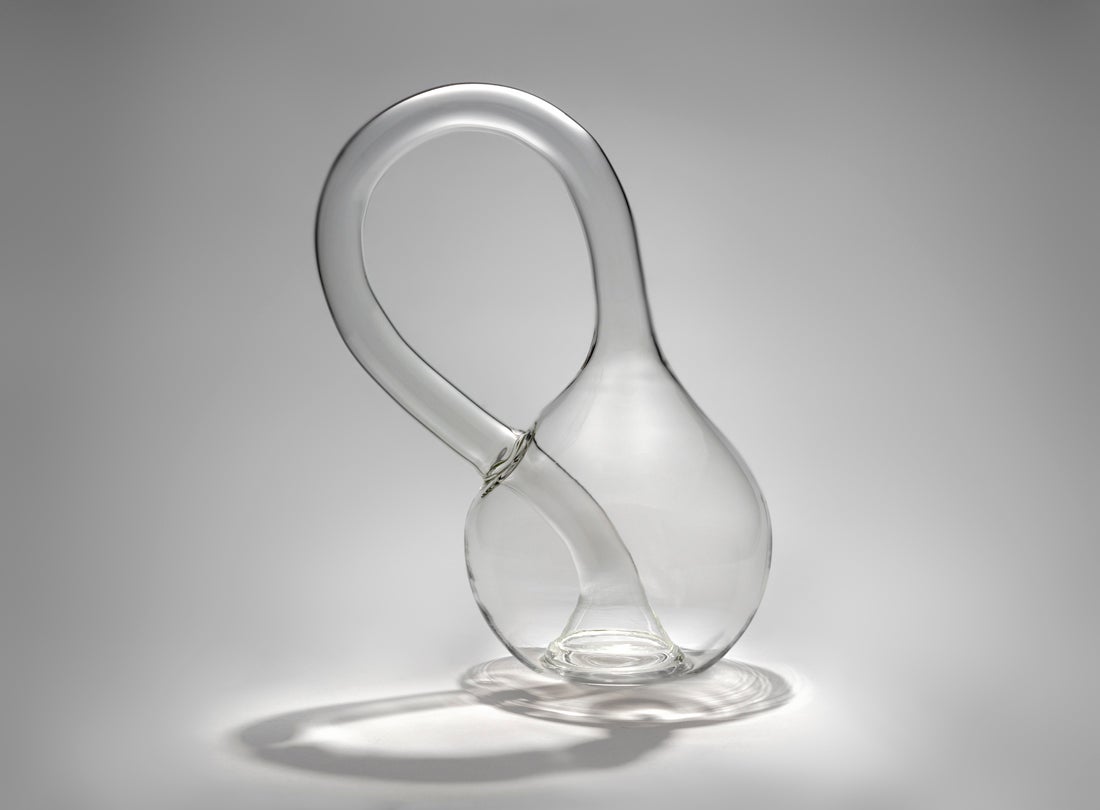 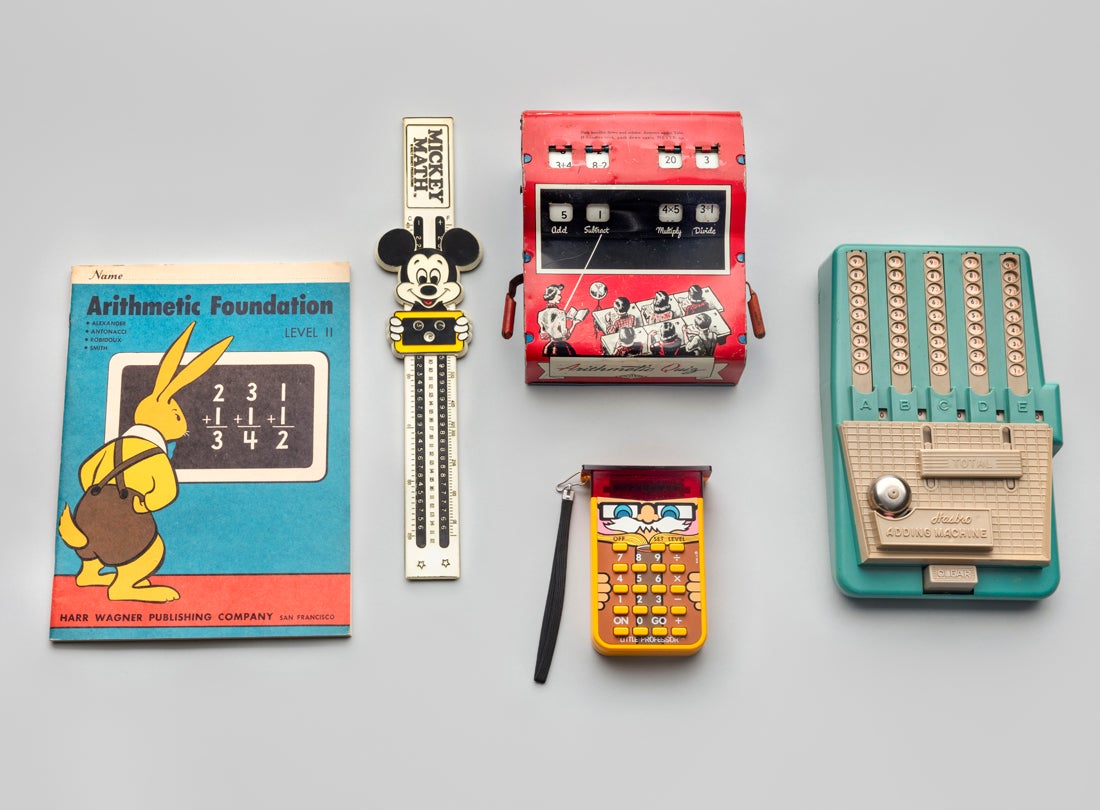 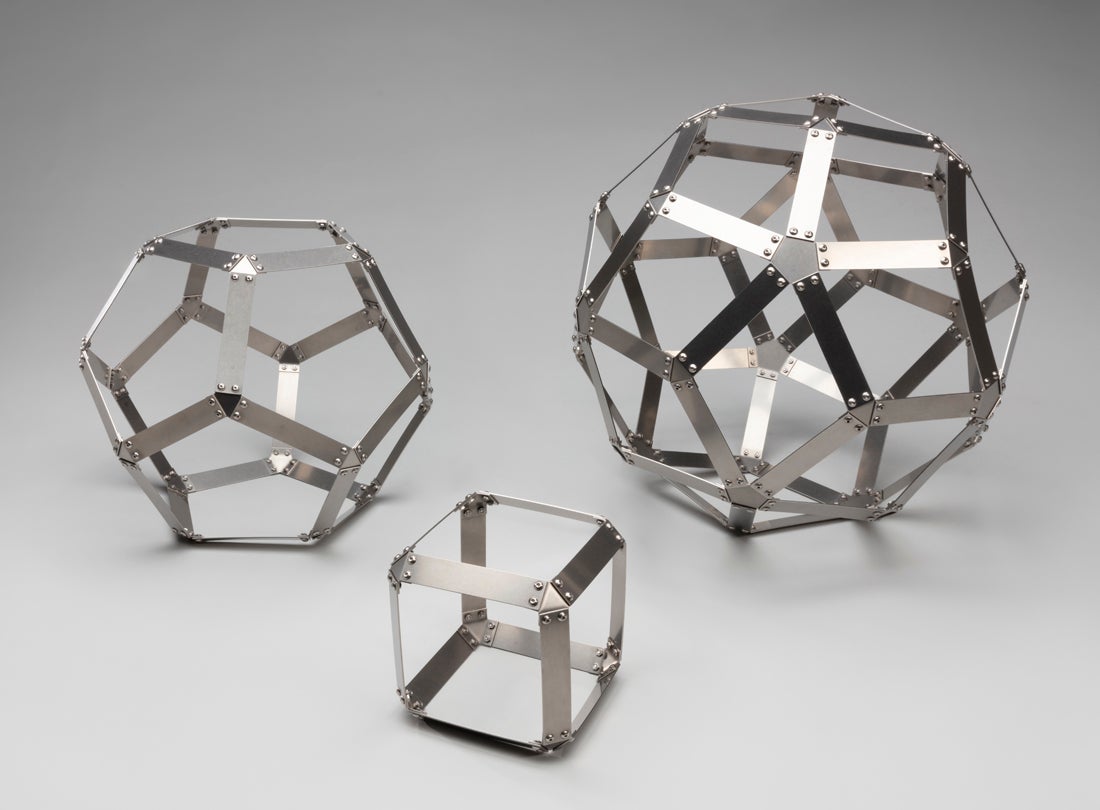 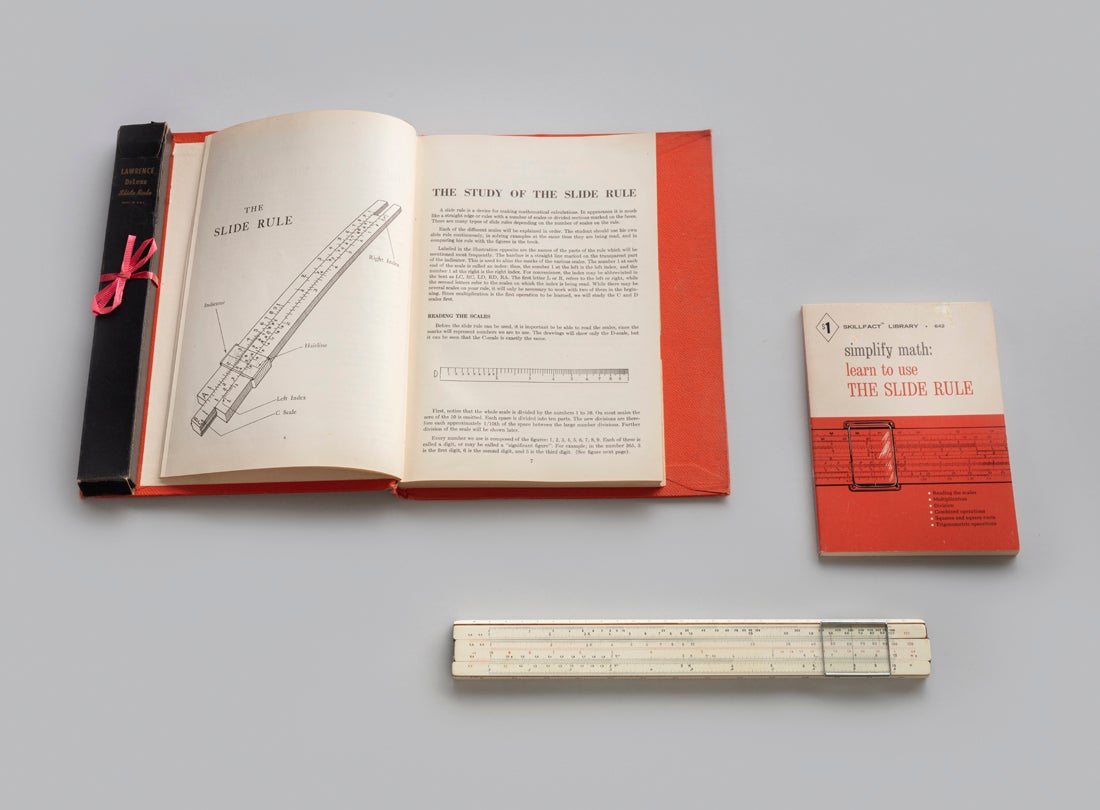 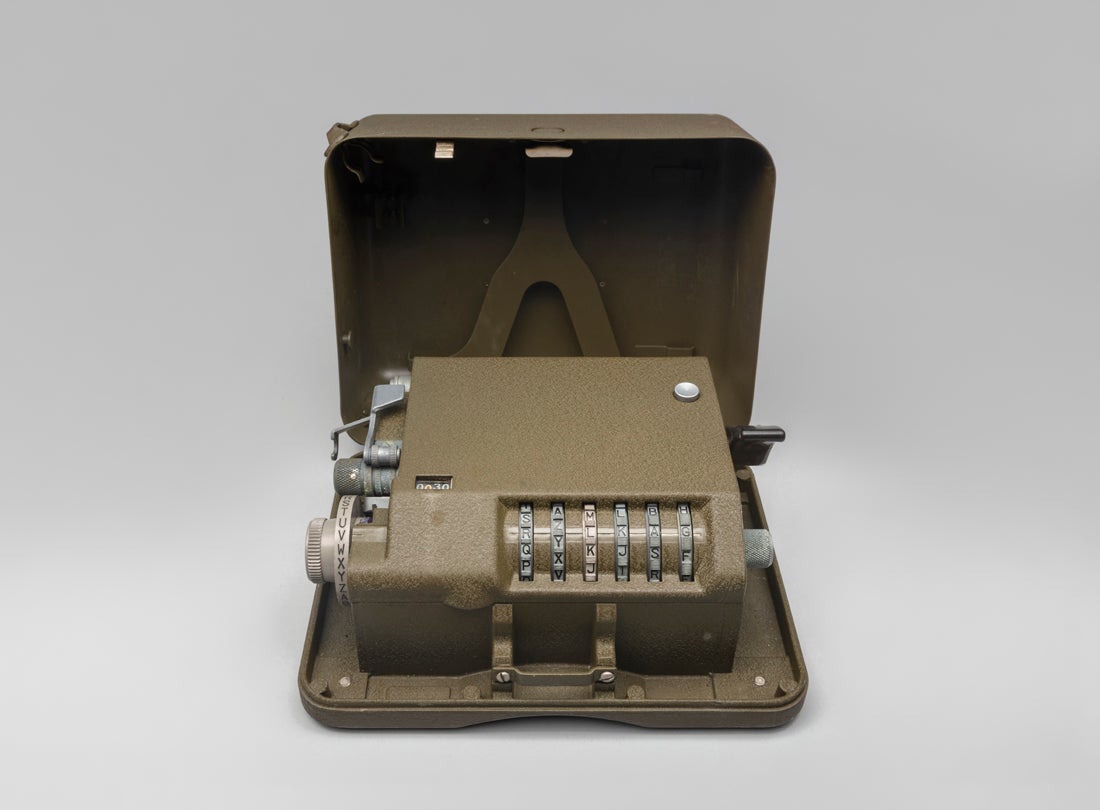 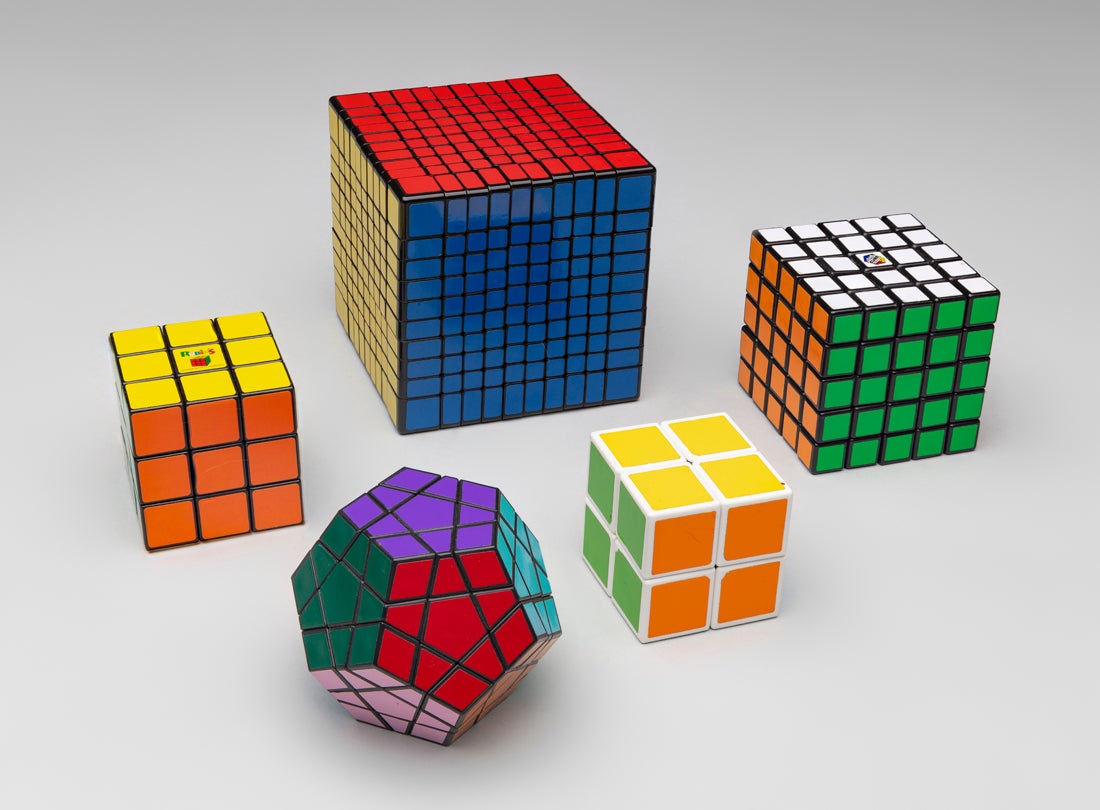 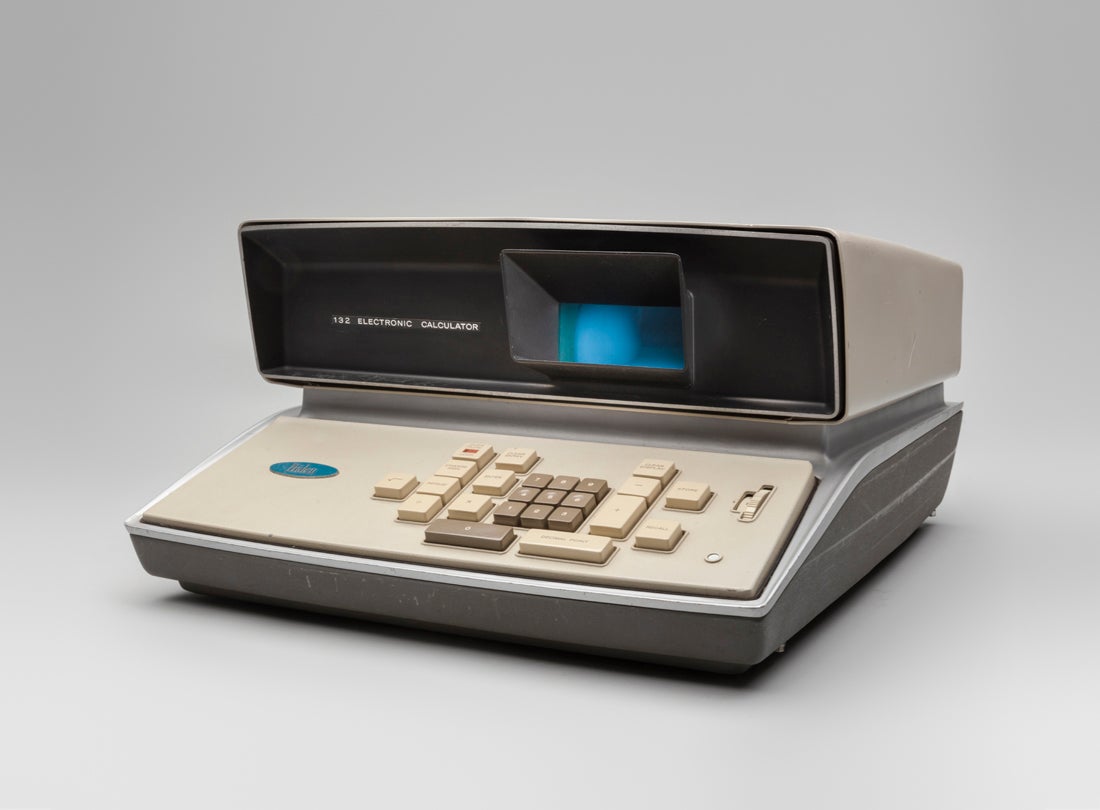 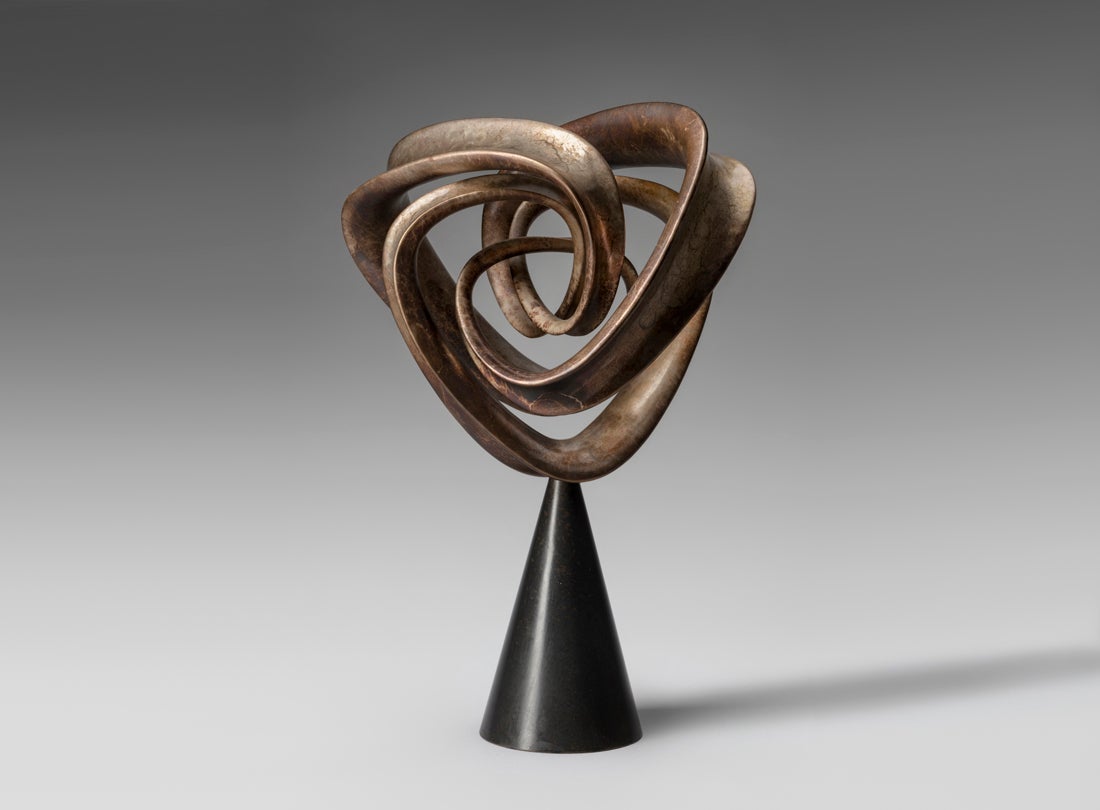 During the seventeenth and eighteenth centuries, a handful of inventors built mechanical calculating curiosities. The Arithmometer, patented by Charles Xavier Thomas in 1820 in France, became the first commercially successful mechanical calculator in the second half of the nineteenth century. In early models, a silk ribbon activated the machine; later models had a more user-friendly hand crank. Early calculating machines multiplied by repeated addition. To multiple by tens, hundreds, or larger units, users had to shift the carriage and turn the hand crank.

From the 1870s to around World War I, universities in Europe and North America acquired collections of mathematical models made from plaster, metal, paper, wood, and string. These models allowed students to see the geometry of complex functions, revolutionary to mathematics at the time. German mathematicians Felix Klein (1849–1925) and Alexander Brill (1842–1935) created some of the earliest models. Klein displayed a number of them at the 1893 World’s Columbian Exhibition in Chicago to promote the idea that students must visualize algebraic relationships through geometry. Today, algebraic geometry serves as a source of deep insight throughout mathematics.

In the 1930s, artist (1890–1976) Man Ray made photographs of mathematical models at the Institut Henri Poincaré in Paris. A decade later, he created the series of paintings, “Shakespearean Equations” based on the images he captured. The artist described the shapes as “so unusual, as revolutionary as anything that is being done today in painting or in sculpture.”

In 1893, Swiss engineer Otto Steigler invented the Millionaire. Made of brass and weighing sixty-seven pounds, this revolutionary machine could perform a direct multiplication. With a single turn of the hand crank, it multiplied two numbers together and calculated results up to eighteen digits. For decades, banks balanced their books and figured compound interest on Millionaires. By the twentieth century, a variety of practical adders and calculating machines assisted people with arithmetic operations.

In 1881, Edwin Thacher, a railway bridge designer in Pennsylvania, designed a cylindrical slide rule to assist in his calculations. Thacher’s rule, though it fit on a desk, was equivalent to a conventional slide rule over fifty-nine-feet long. The rule had scales for multiplication and division and another scale, with divisions twice as large, for use in finding squares and square roots. Keuffel & Esser Company of New York sold versions of the Thacher cylindrical slide rule from at least 1883 until about 1950.

Intrigued by topology—the study of geometric properties that do not change when you stretch a shape—Cliff Stoll began making Klein bottles. Give a strip of paper a half-twist and tape the ends together— you get a Möbius loop, a one-sided shape with one edge. Make two Möbius loops and glue their edges together—you should get a Klein bottle. But this is impossible in our universe—you need four-spatial dimensions! In our 3D universe, every Klein bottle must have a self-intersection, where tubing crosses through a wall.

This large, classical Klein bottle shows the shape first imagined by mathematician Felix Klein in 1882. An ordinary glass bottle has a lip that separates the outside surface from the inside surface. An ant walking on the bottle must cross an edge (the lip) to reach the other side. But a Klein bottle has only one side—an ant can walk the entire surface and never cross an edge.

At mid-century, a large school-aged population and Russia’s successful launch of Sputnik I in 1957 (the first satellite to successfully orbit the Earth), triggered an urgency for new, more rigorous mathematical curricula in the United States. Advocates of the “New Math” movement encouraged learning through discovery rather than just memorizing methods of solving problems with the goal of creating a new generation of scientists and mathematicians. Today, STEM (science, technology, engineering, math) teaching integrates four disciplines into a program offering practical instruction with “real-world” applications. Even so, universal mathematics literacy remains an ongoing challenge.

The Greek term combines ‘poly’ meaning many and ‘hedra’ for faces or sides; hence, polyhedra are three-dimensional shapes made of polygon faces joined at the edges and corners. Stacy  Speyer created these three polyhedra—a hexahedron, a dodecahedron, and a rhombic triacontahedron. The dodecahedron has twelve pentagon faces. Both this dodecahedron and hexahedron are regular solids because all the faces and vertices are the same. The rhombic triacontahedron has thirty identical faces, but two different types of corners—twenty corners have three edges meeting, and twelve corners form the meeting points of five edges. Each face is a golden rhombus: the ratio of the face’s long diagonal to its short diagonal equals the golden ratio, 1.618…

Although known since antiquity, polyhedra continue to warrant scholarship today—they are studied in mathematics for symmetry groups, in biology to understand viral protein capsids, and in physics to infer shapes of nanoparticles.

Slide rules are built on logarithms—adding the logs of two numbers corresponds to multiplying the numbers. Scales on the slide rule allow you to multiply, divide, find exponentials, squares, cubes, and roots. Yet despite their complexity, you cannot perform simple addition and subtraction with a slide rule.

Once the essential tool of engineers, scientists, and industrial designers, the slide rule now pales in comparison to the calculator on your cellphone. Yet the humble “slipstick” helped design countless modern wonders—the Empire State Building, the Boeing 707 airliner, the Hoover Dam, and the curves of the Golden Gate Bridge.

2, 3, 5, 7, 11, 13, 17.…Prime numbers, the natural numbers greater than one that are not the product of other natural numbers, have fascinated mathematicians for millennia. Dozens of prime-number conjectures remain unsolved, including the most important problem in pure math: the Riemann hypothesis. Modern cryptosystems rely on huge prime numbers for secure cyphers. Prime numbers prevent outsiders from viewing your data whenever your web browser shows ‘https.’ Internet security depends on mathematical “trap-door” functions that make it easy to go forward but difficult to reverse. For example, multiplying a pair of big numbers is simple. But finding the primes that factor a huge number is extremely difficult, even for a supercomputer.

During World War II, all sides used mechanical ciphers. The U.S. military’s M-209 portable crypto machine required users to encrypt text one letter at a time. By turning a crank, the scrambled message printed out on paper tape. Gears within the M-209 have prime-number ratios to prevent repetitive positions—with over one million positions before the key repeats. The M-209, however, is not fully secure, partly because its prime numbers are short. It worked well for ephemeral battlefield messages as the enemy typically deciphered the message too late to be useful.

In 1974, Hungarian sculptor Ernő Rubik (b. 1944) invented the now ubiquitous Rubik’s cube. Wildly popular in the 1980s, cube puzzles have resurged in the past decade. The collection of ways to turn a Rubik's cube forms a mathematical group—a structure first used to study symmetries. Group theory, integral to Rubik’s cubes, is a powerful tool in mathematics, and also important in cryptography, chemistry, and robotics.

Group theory shows that a simple Rubik’s cube has 43,252,003,274,489,856,000 different arrangements—even more if you consider orientations of each cubie. For many algebraic structures, order of operations is insignificant. For instance, 2+3+4 is the same as 4+2+3, so ordinary addition is commutative. But a Rubik’s cube is non-commutative, so order of operations is important: twist the right face clockwise and then the top face clockwise. You cannot undo these two moves by twisting the right face counterclockwise and then the top face counterclockwise.

Located in San Leandro, California, the Friden Company manufactured mechanical calculators from 1930 well into the 1960s, including the Friden STW, the “Cadillac” of mechanical calculators, used by many of NASA’s human computers. In 1963, Robert Ragen (1928–2012), an engineer at Friden, felt that gears and levers were a clumsy way to do simple arithmetic. He designed the Friden 130 to calculate electronically. Among the first electronic calculators, it pioneered the use of transistors, CRT displays, and an ingenious way to enter data called reverse Polish notation. A user simply typed the first number, pressed enter, then typed the second number and pressed multiply. An immediate success, scientists and engineers felt astounded by its speed: you could multiply two numbers and the result appeared instantly without waiting for motors to start or gears to crunch. Silent and made of lightweight aluminum, the later model 132 even solved square roots.

Carlo Séquin looks for underlying mathematical structures in the abstract geometrical sculptures of other artists. He then slightly modifies these structures and produces novel, complex forms. Alternatively, he may start with a geometrical model that tries to explain a mathematical concept. He then develops and refines the model until it becomes a sculpture independent of the mathematical ideas behind it.

A torus knot is made by winding a string around a doughnut, so it encircles it five times and passes through the hole three times. In this silvery sculpture, the curled ribbon forms this knot, showing three-fold symmetry. For a more dramatic look, the lobes forming the knot display a slightly triangular shape.

Nautical knots have ends to tie or untie, but in mathematical knots, both ends connect. Some of the simplest mathematical knots include the unknot, which forms a ring, and the trefoil or torus knot, which has three crossings. Knot theory is a branch of mathematical topology—understanding how objects can be deformed by stretching and bending, all the while keeping the same connectivity and structure. Modern knot theory includes concepts such as braids, tangles, and orbifolds. These aid in our understanding of DNA, how enzymes interact with proteins, and even cosmological superstring theory. 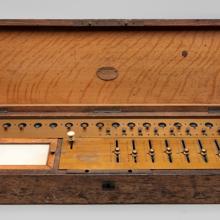 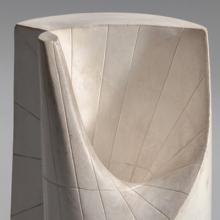 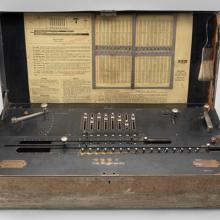 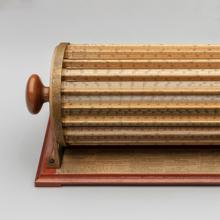 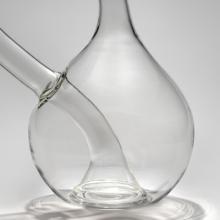 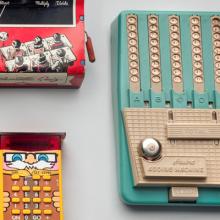 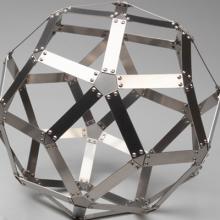 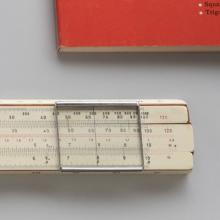 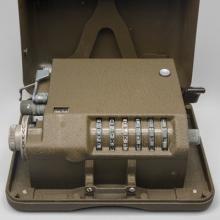 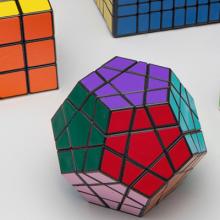 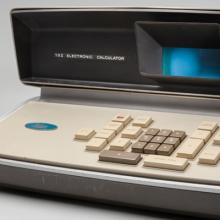 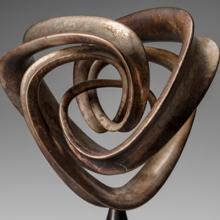