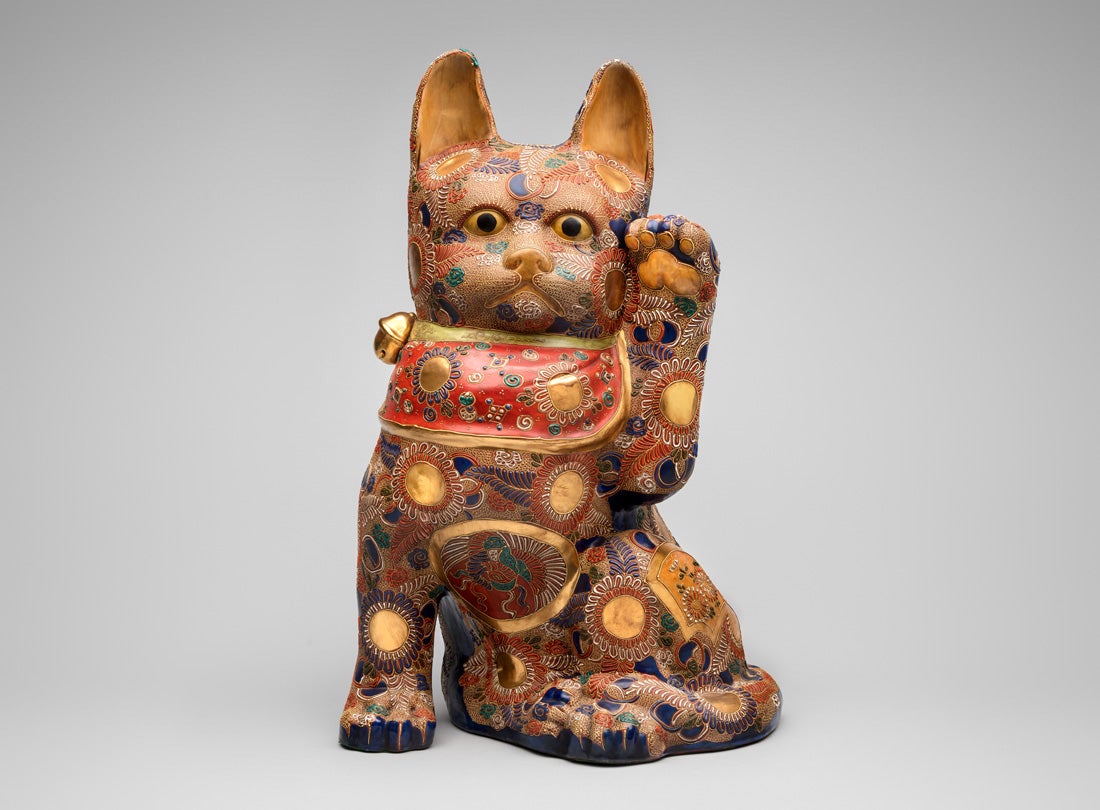 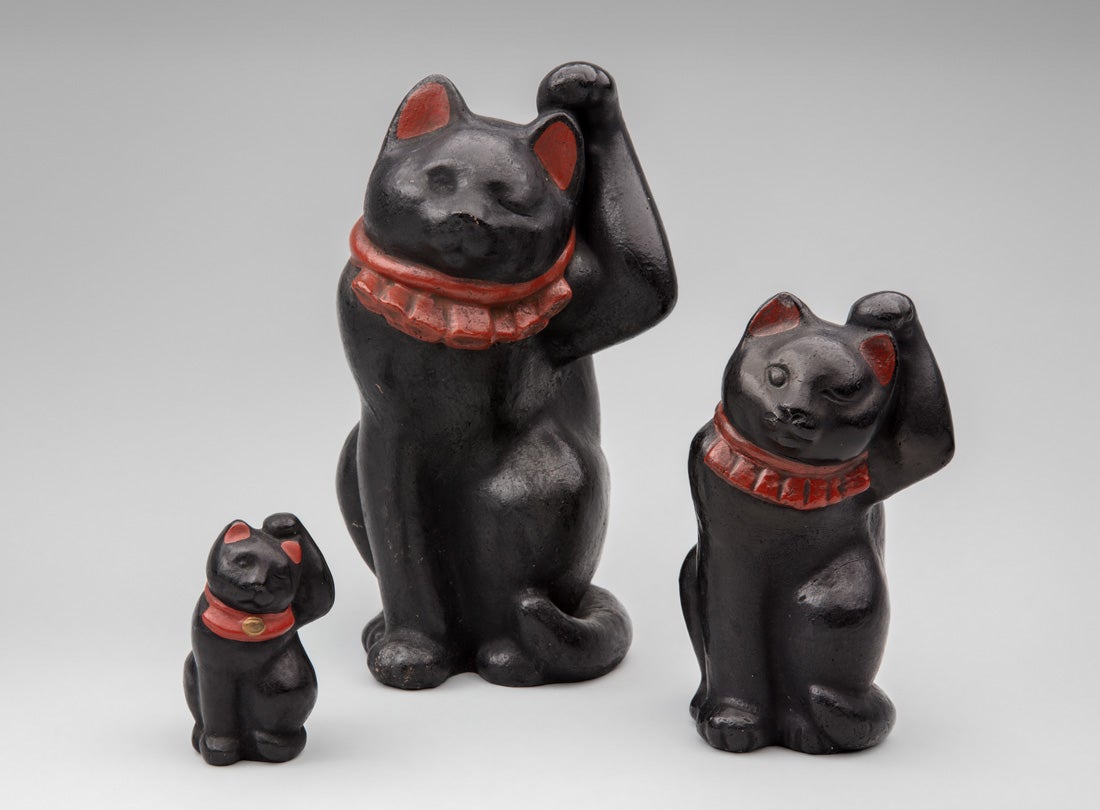 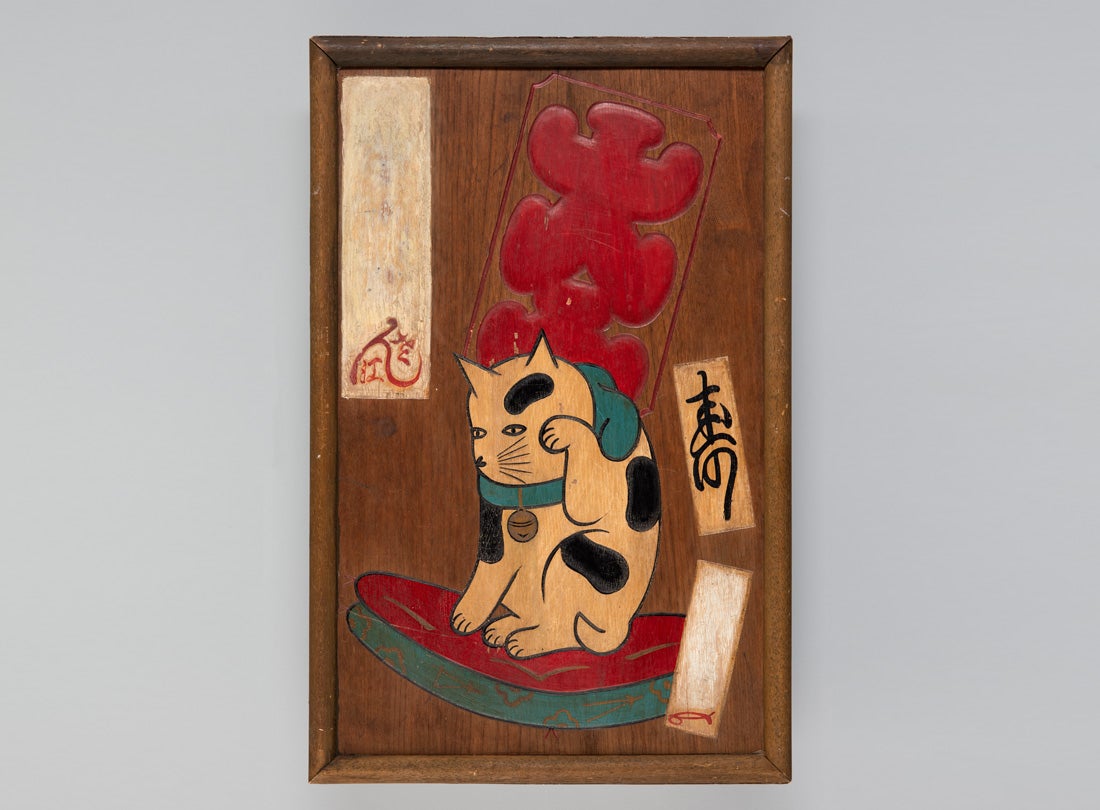 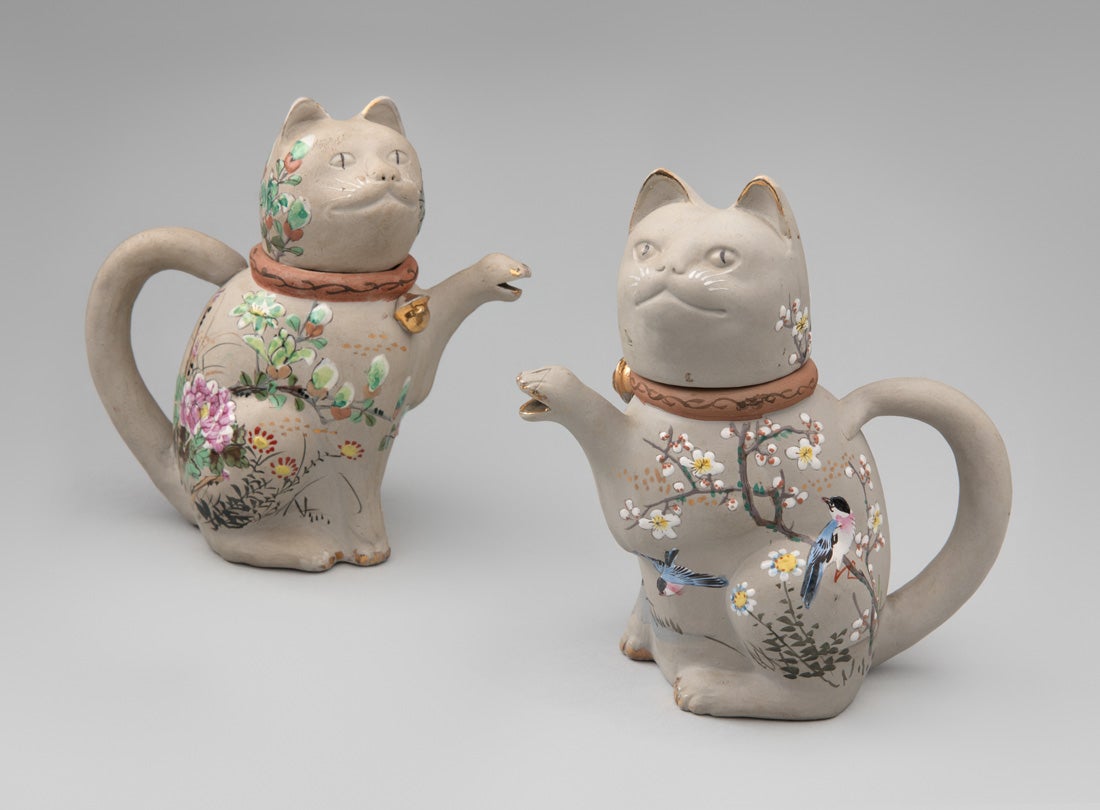 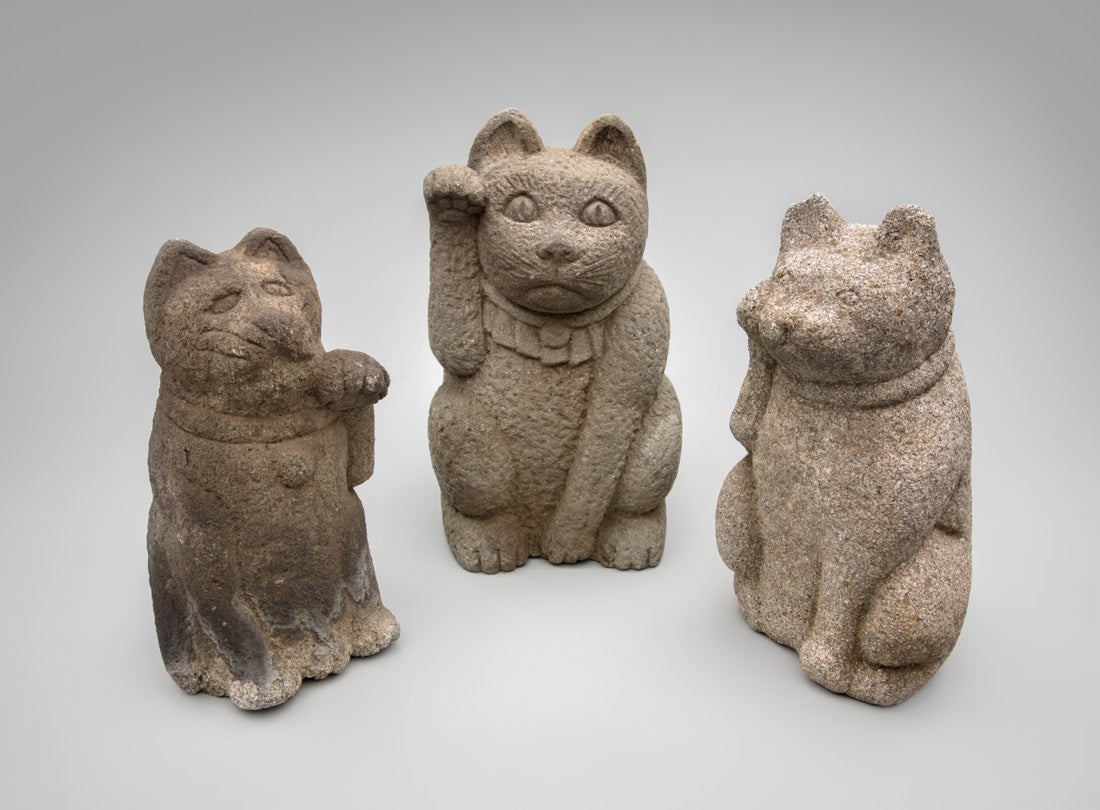 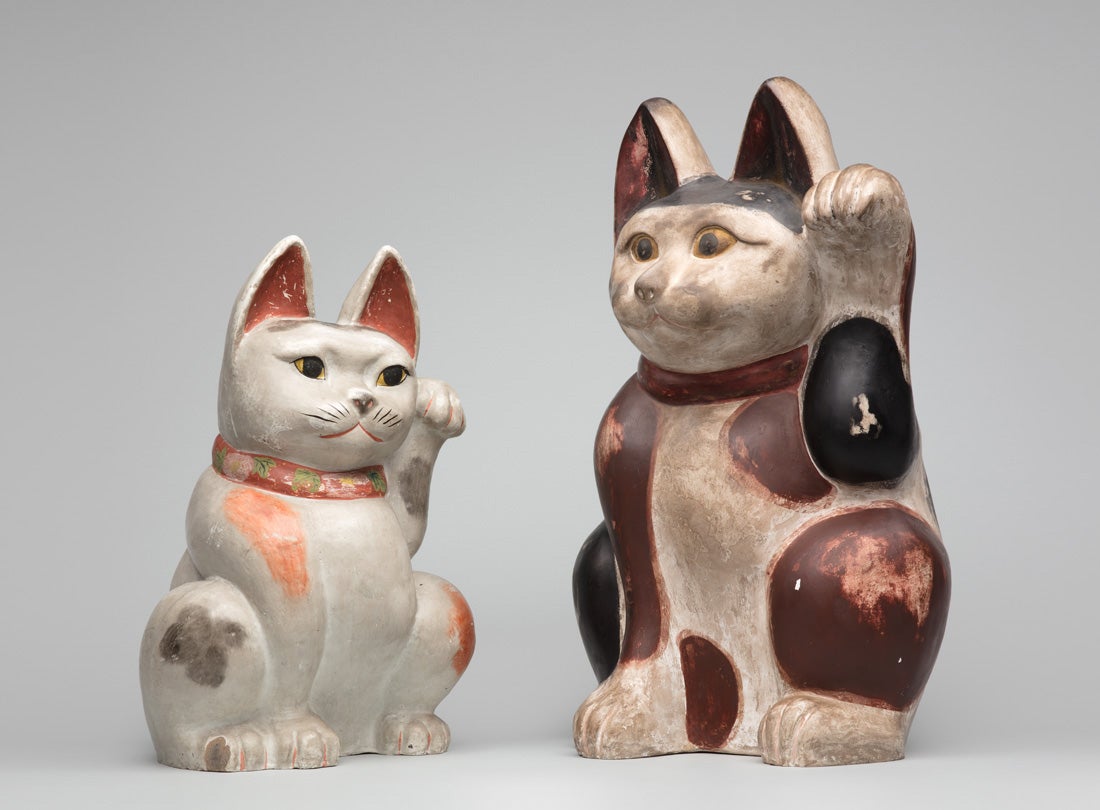 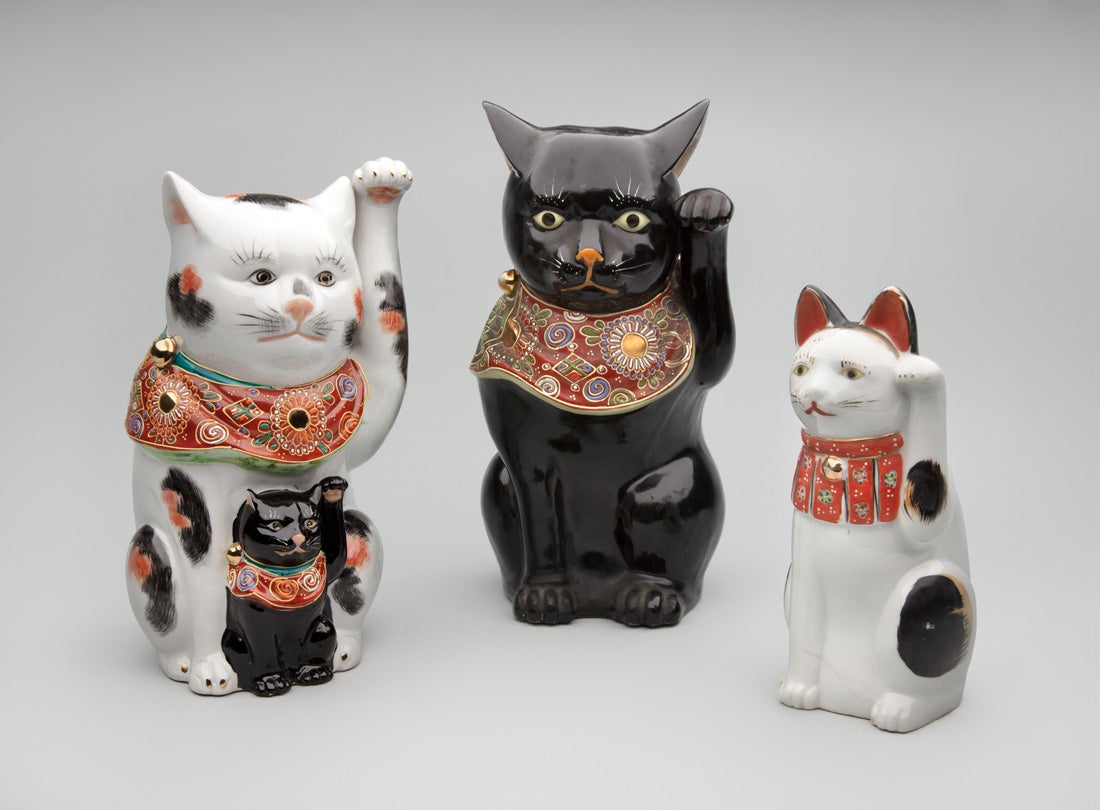 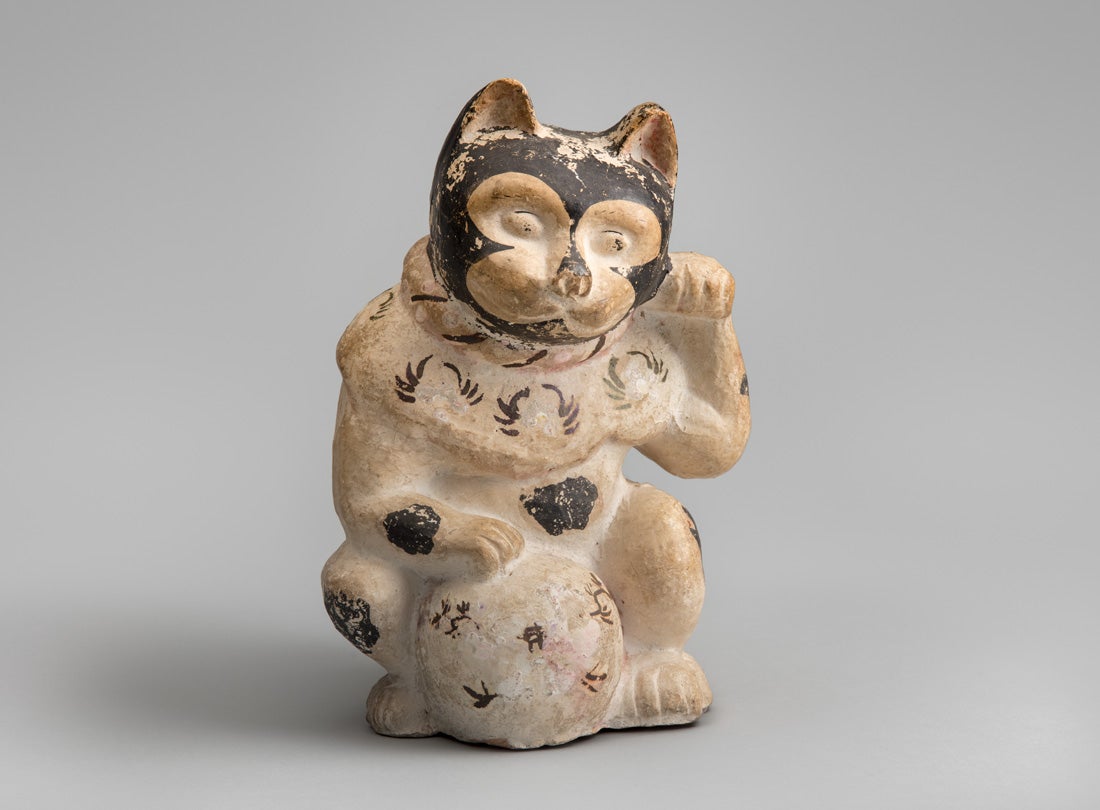 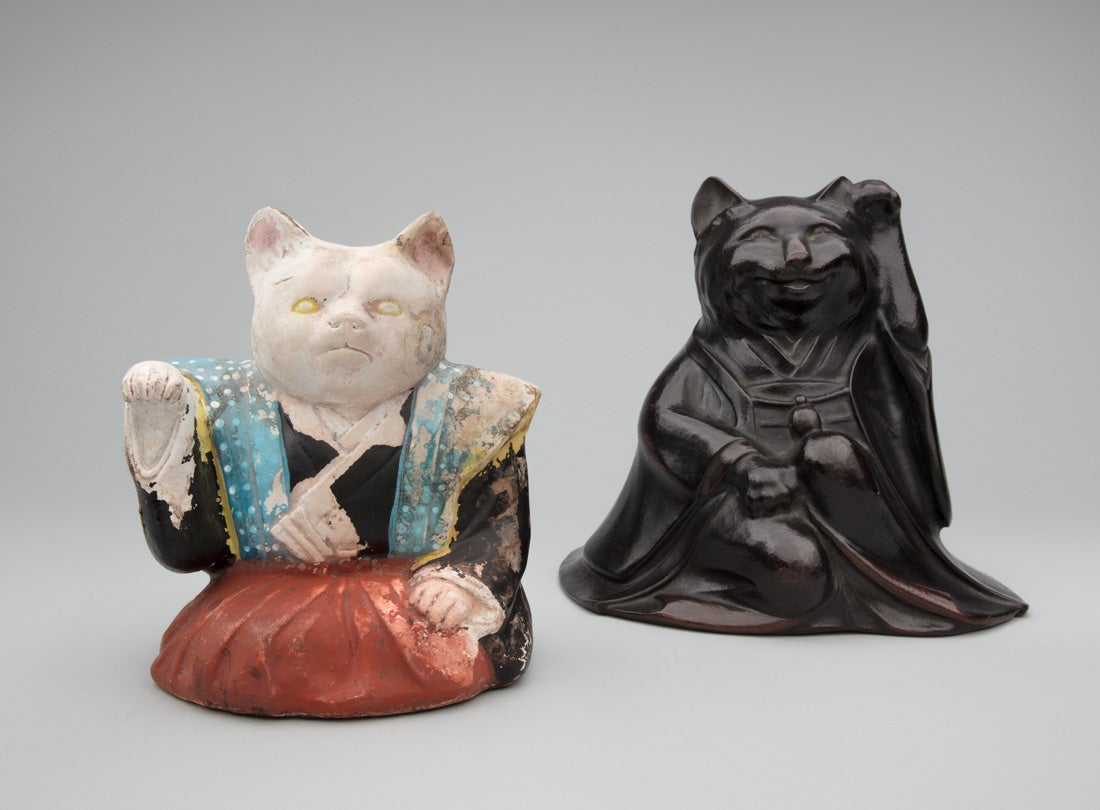 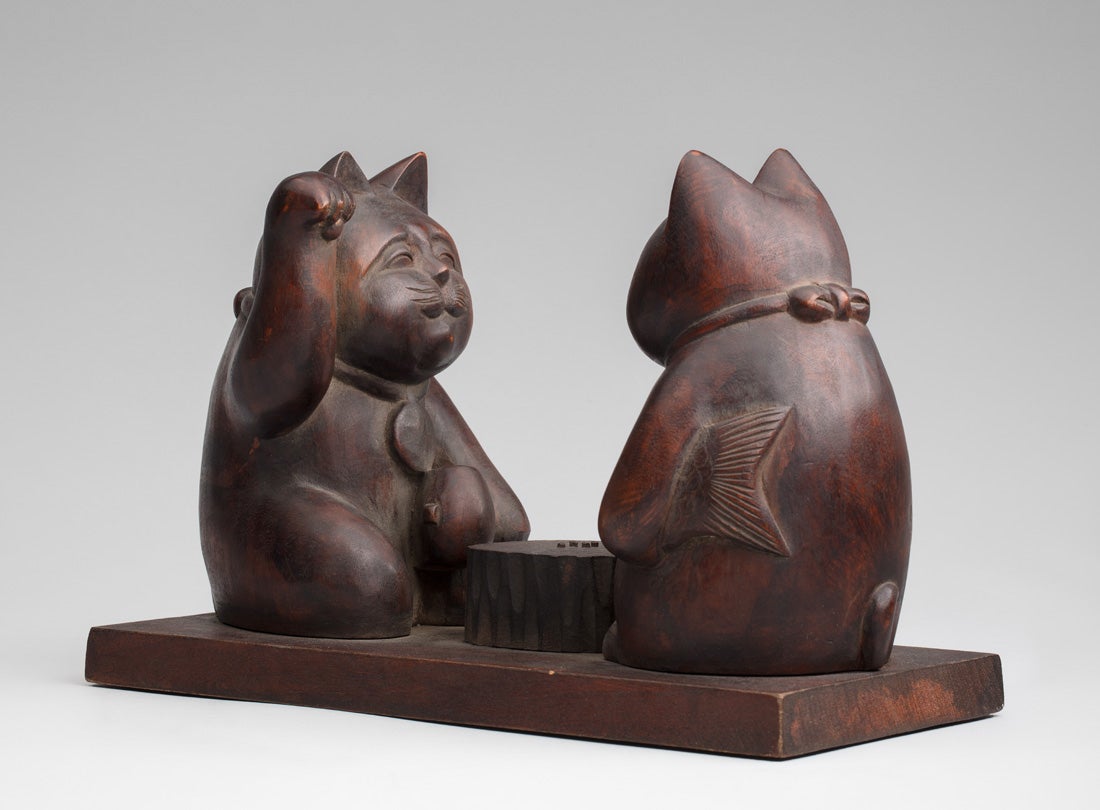 Located in Ishikawa Prefecture, the Kutani kilns, established in the late 1600s, began crafting a variety of porcelain wares in 1840. The most celebrated of these wares were decorated with red glaze and gold ornamentation. During the 1920s, Kutani kilns began making maneki neko for export to foreign markets. Unlike other beckoning cats, Kutani cats typically sit facing forward while leaning heavily to one side; the cat’s ears also turn to the side. Kutani created many large examples, such as the one displayed here. The most flamboyant Kutani maneki neko, many of which are exported to China, display decorative motifs with raised lines in bold shades of gold and red.

The kanban or Japanese shop sign featured imagery that allowed potential customers to identify the things merchants sold in their shops. During the Meiji (1868–1912) and early Taisho (1912–26) periods, another type of shop sign developed. Rather than represent what the merchant sold inside, these shop signs display auspicious characters and symbols, such as beckoning cats, to lure customers.

The Banko kilns, located in Yokkaichi in central Japan, were first established in the eighteenth century. By the early twentieth century, animal shapes, such as monkeys and elephants, became a favored theme. Although the Banko kilns never developed a strong tradition of crafting maneki neko, they made some in particularly whimsical forms, such as bobble heads and tea pots—the cat’s paw serves as the spout and its head the lid. In typical Banko fashion, the bodies of these teapots are highly decorative, featuring flowers, birds, and butterflies.

The Mikawa kilns, located near the Fushimi kilns in central Japan, began producing unique versions of maneki neko by the early twentieth century. The cats typically display a buff or white color body with darker areas at the hips, shoulders, and back of the heads and ears. These full-bodied cats face forward and have short tails and salient facial features. Sometimes Mikawa maneki neko are made quite large—some more than twenty-five inches tall, making them the largest of all the traditional maneki neko. Because of their imposing size, they became popular gifts to celebrate the opening of an inn or restaurant.

Today, we do not give much regard to porcelain, however, it was once a coveted good, so precious to Europeans that it was referred to as “white gold.” Porcelain was not only admired for its beauty, but also for its durability and pure-white color. China first developed porcelain during the Tang dynasty (618–907). During the tenth century, Korean potters learned the craft, though it was not until the early fifteenth century that large-scale porcelain production began. In 1592 and 1598, Japan invaded Korea. This period of hostility is often referred to as the “Potters’ Wars” because the Japanese captured several Korean potters and brought them back to southern Japan where they introduced the Japanese to porcelain manufacturing techniques. Production techniques developed rapidly during the early part of the Edo period (1615–1868). By the 1640s, the Japanese began to successfully compete with Chinese porcelain exports.

This unusual style of beckoning cat comes from the Hanamaki kilns in northern Japan. Its head is slightly tilted; it grasps a ball in its right hand in a playful gesture.

Hatsutatsu-san, an unusual derivative of a beckoning cat, wears clothing and sits as if human with its legs crossed and tucked underneath his body. The cat is closely modeled after the beloved Fukusuke, another Japanese lucky figure; its exact date of origin is unknown. Originally produced at a shrine in Osaka, its popularity led to the production of Hatsutatsu-san at other kilns, such as Fushimi.

One cat holds a wish-granting mallet and mimics Daikoku; the other holds a sea bream, a symbol of good luck, and mimics Ebisu, two of the Seven Gods of Good Fortune in Japan.

These unusual, rather eerie, pure-white, porcelain cats, showcase the beauty of porcelain in its undecorated state. 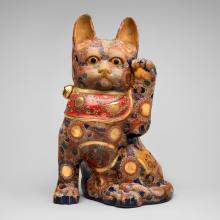 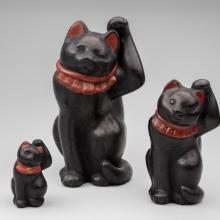 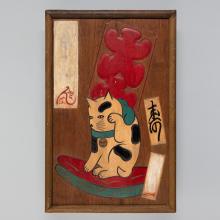 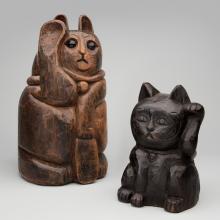 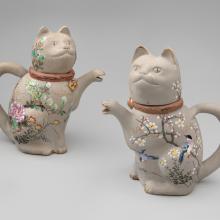 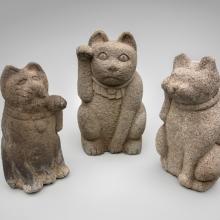 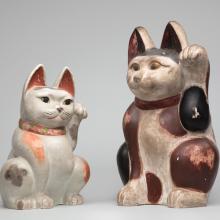 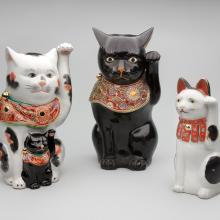 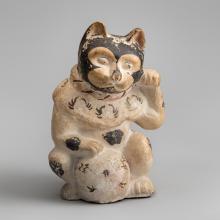 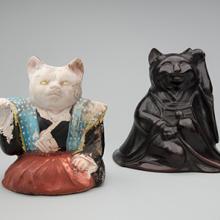 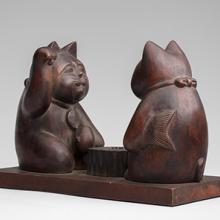 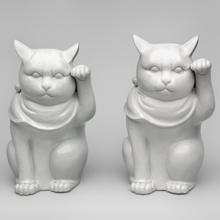