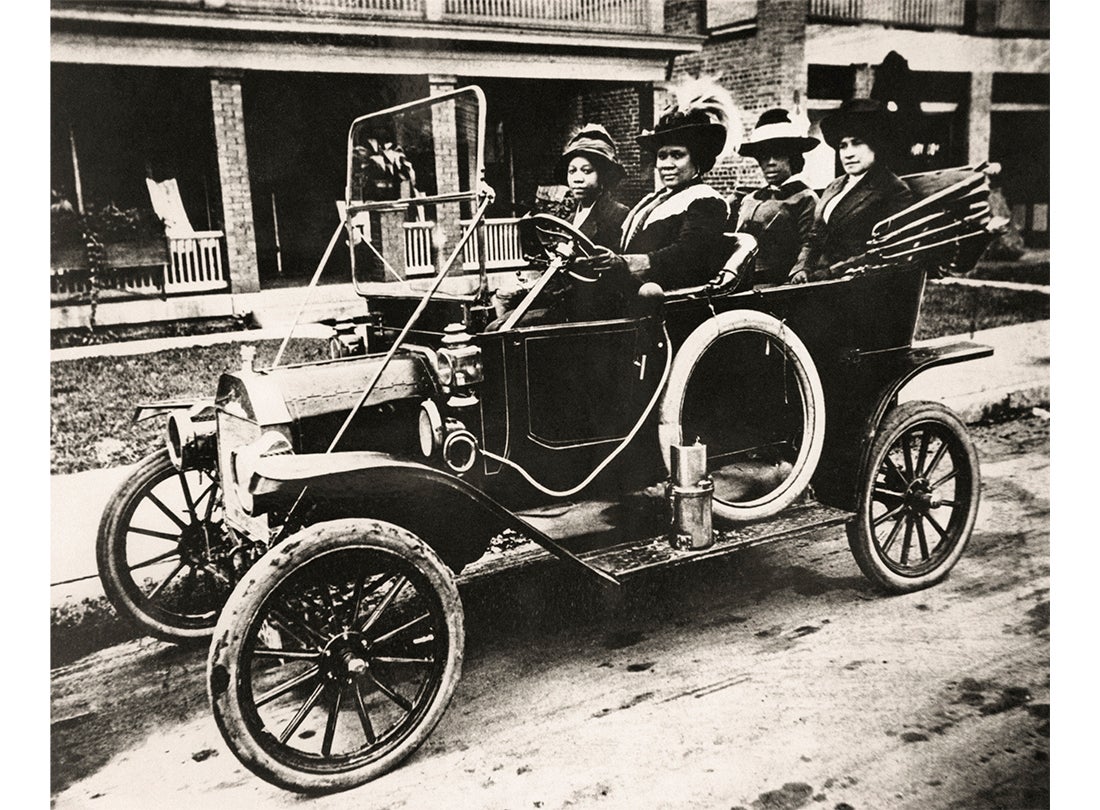 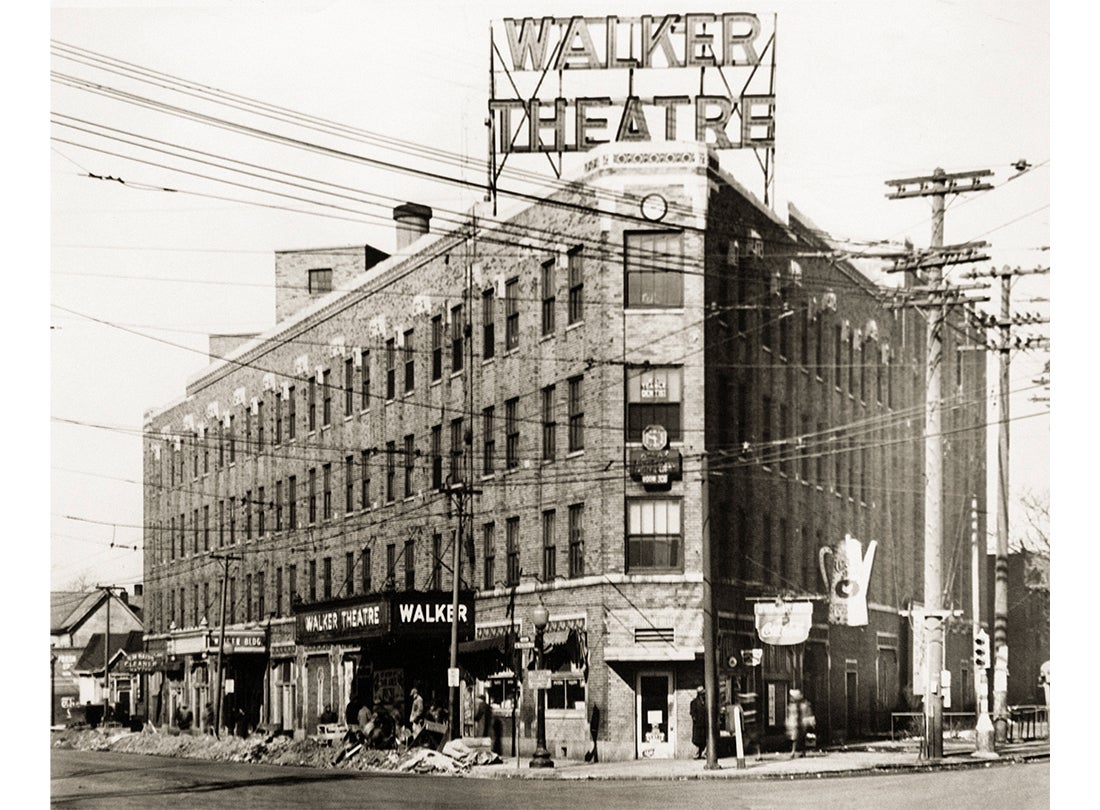 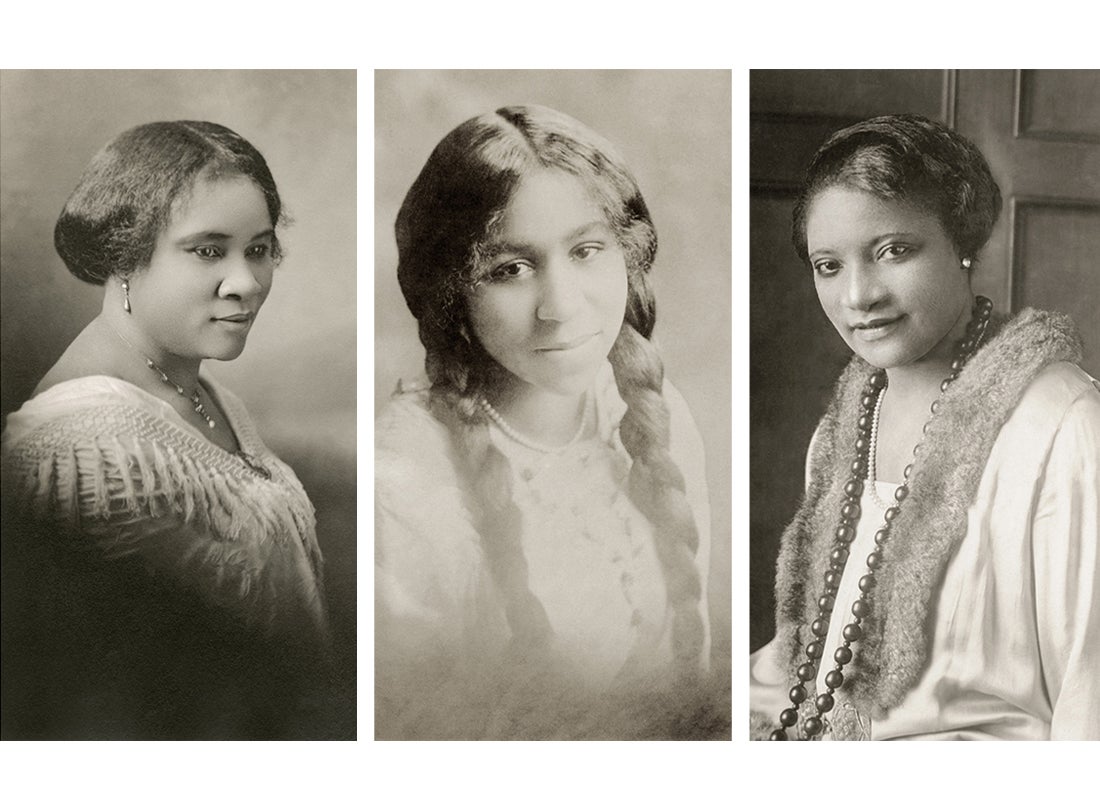 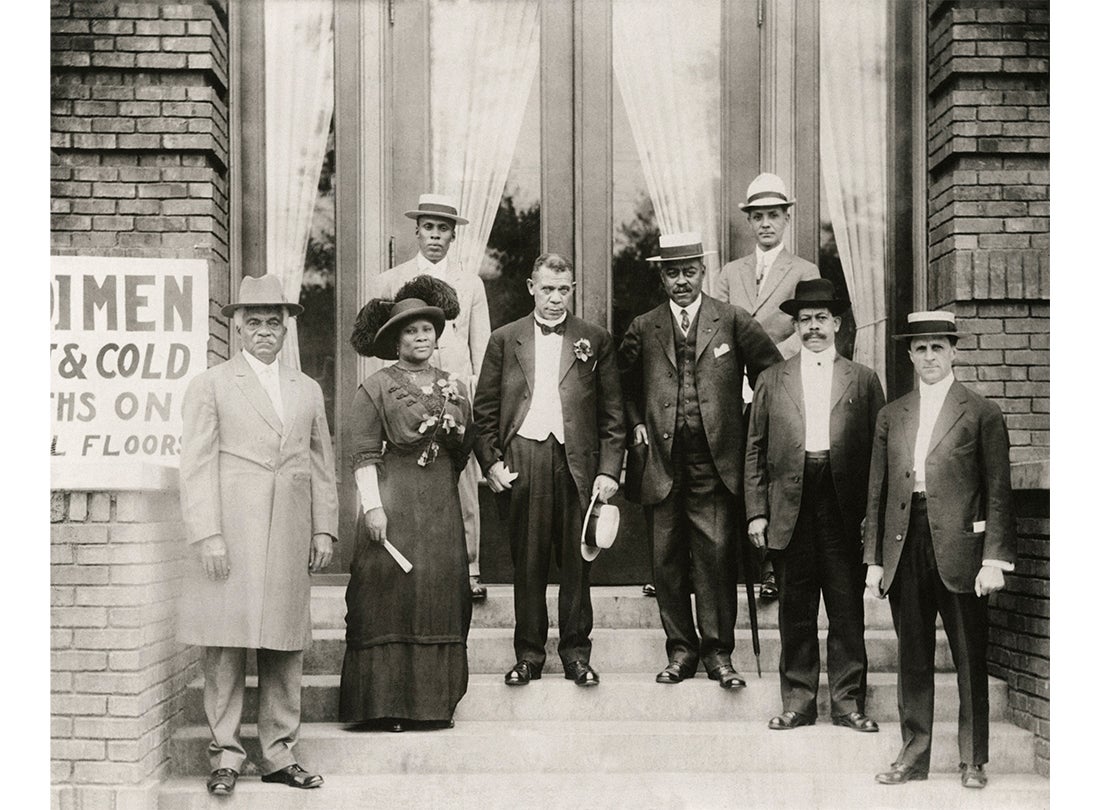 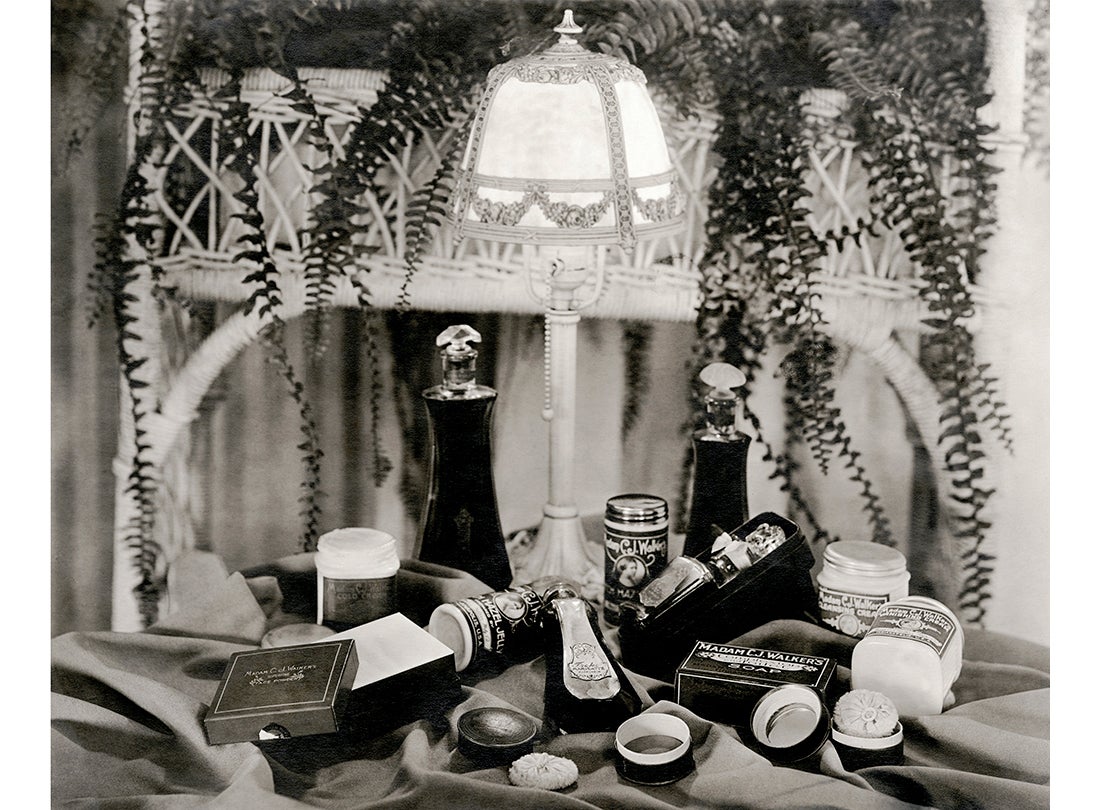 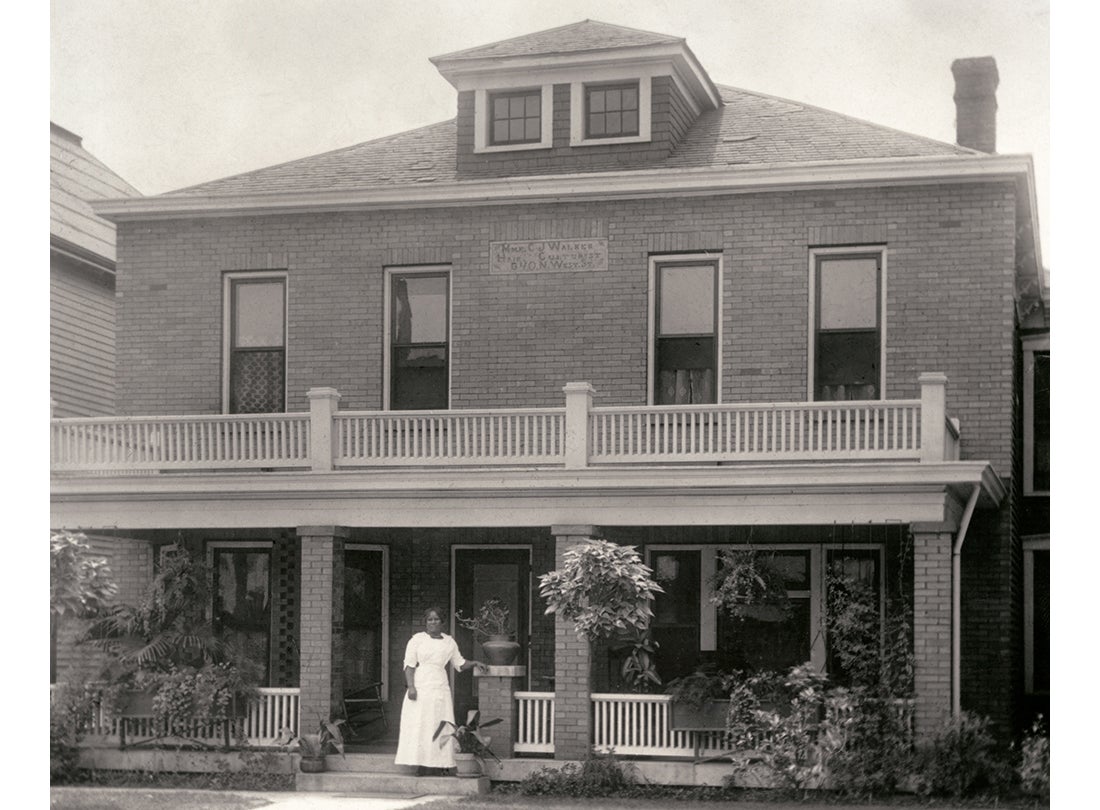 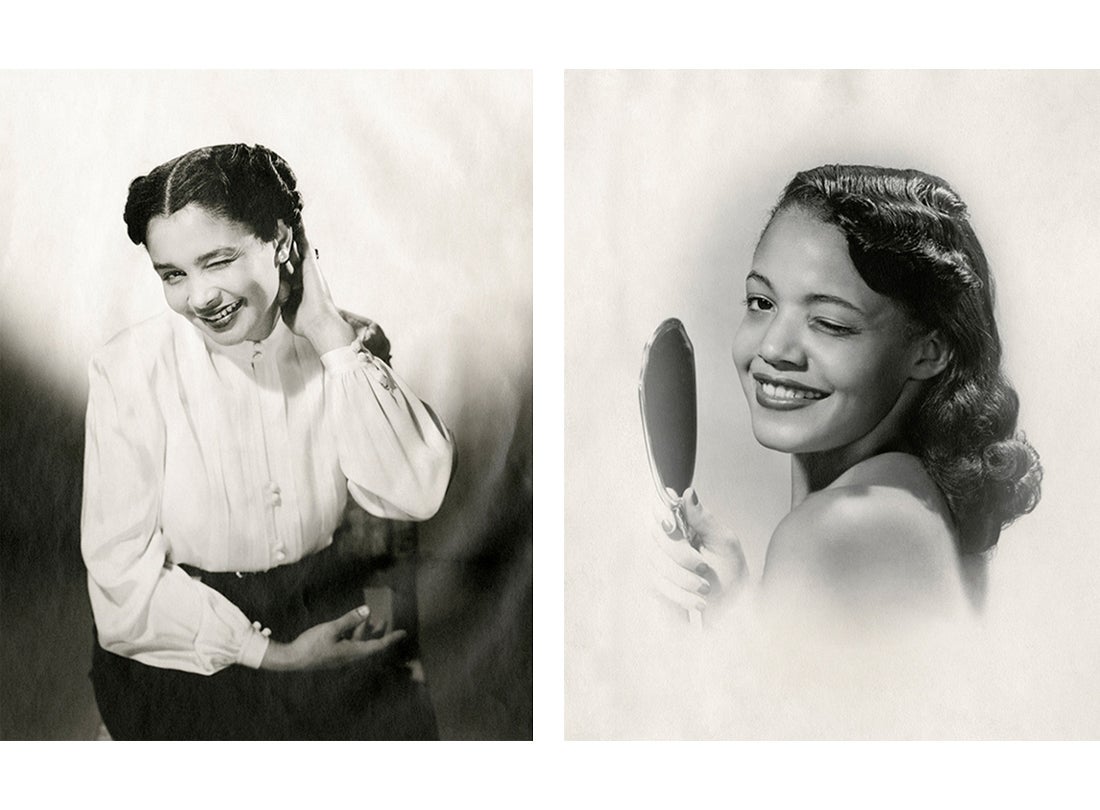 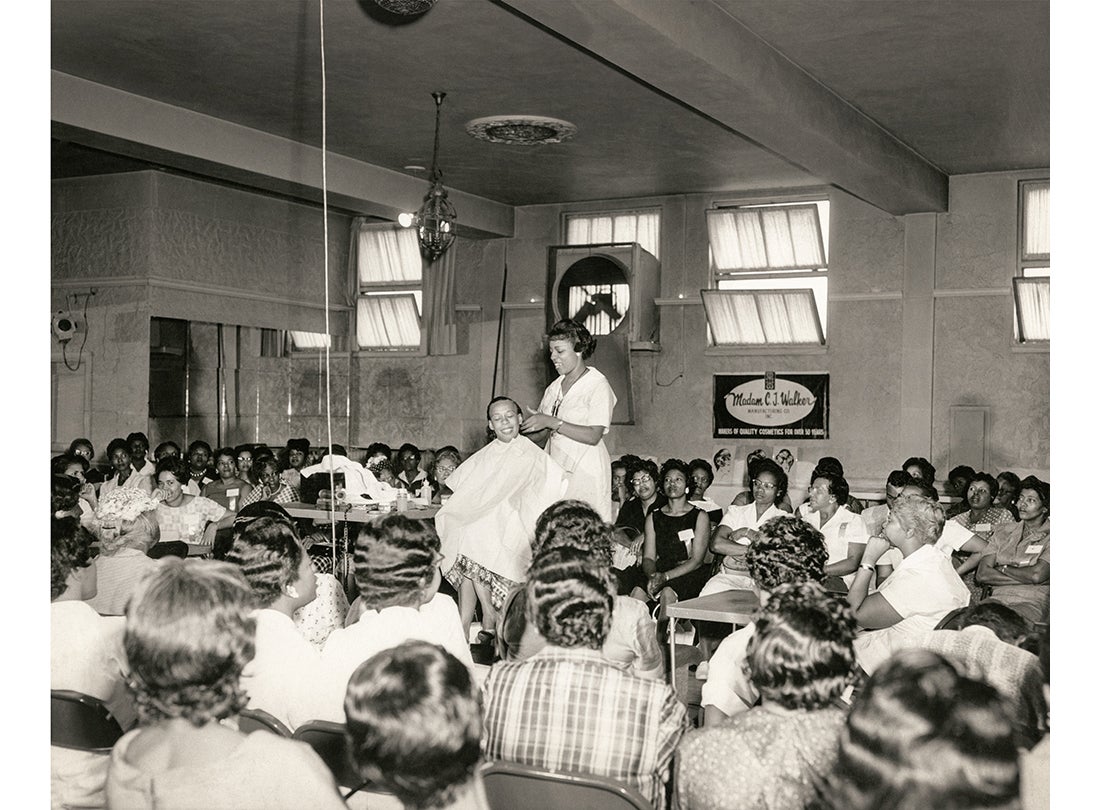 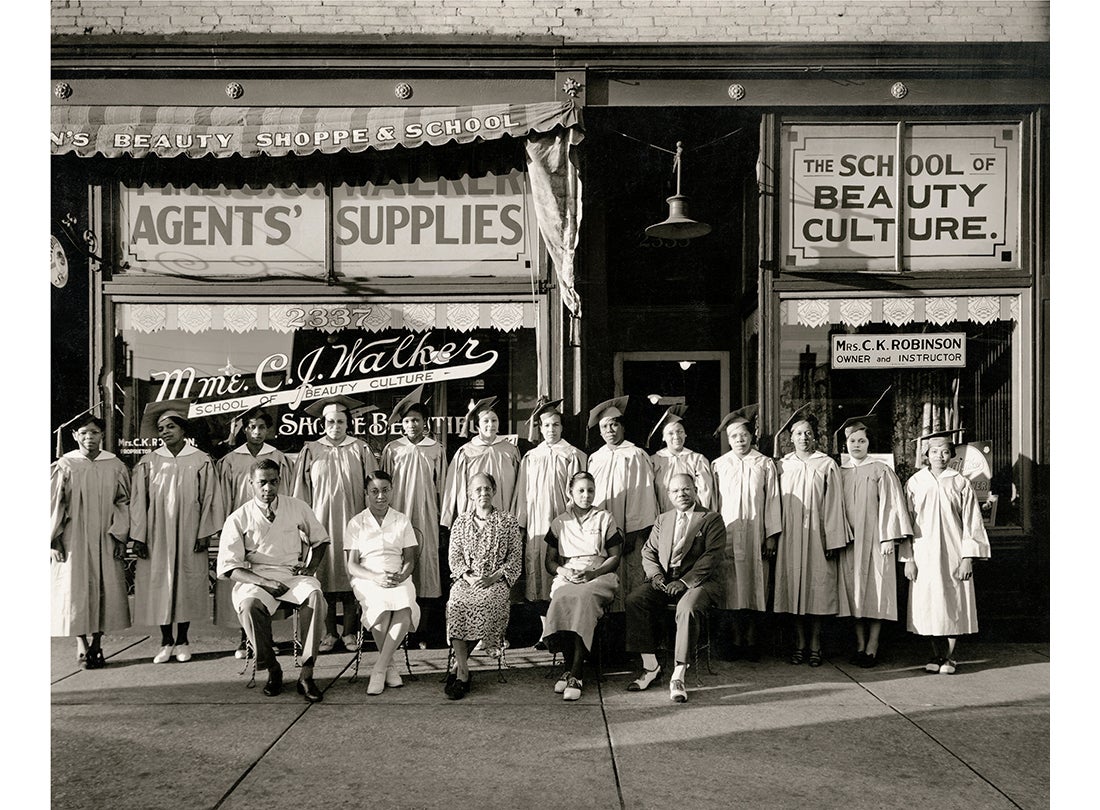 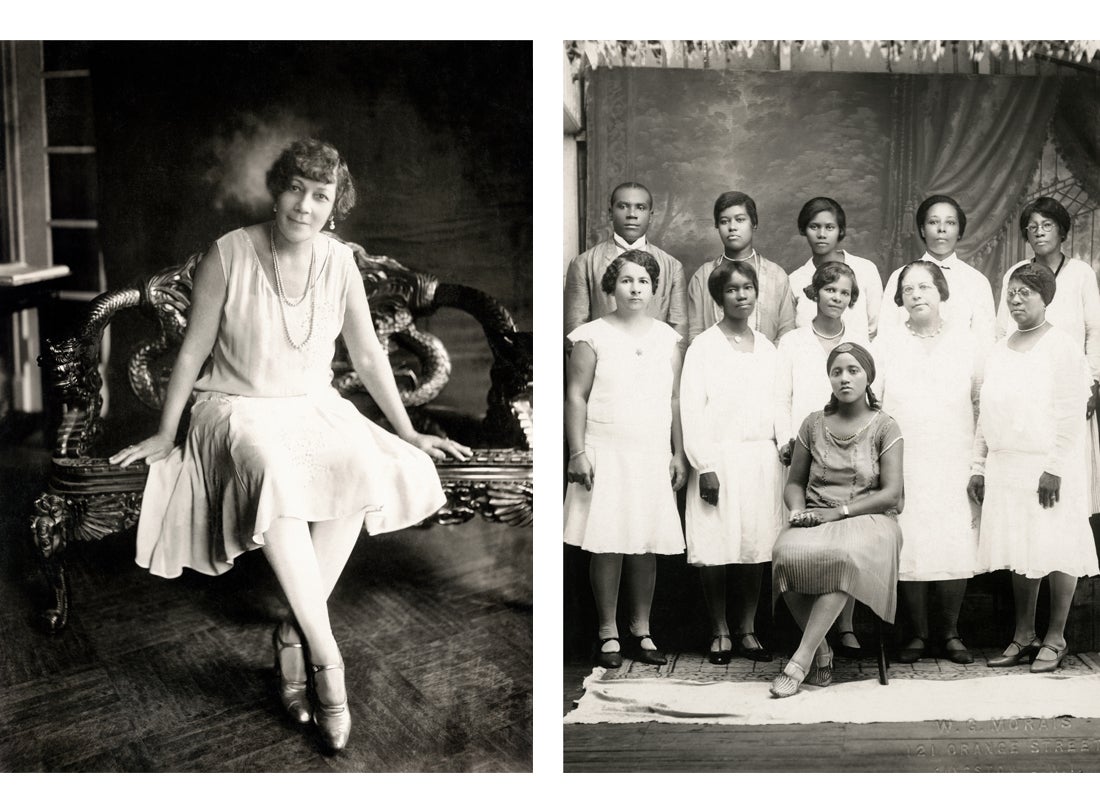 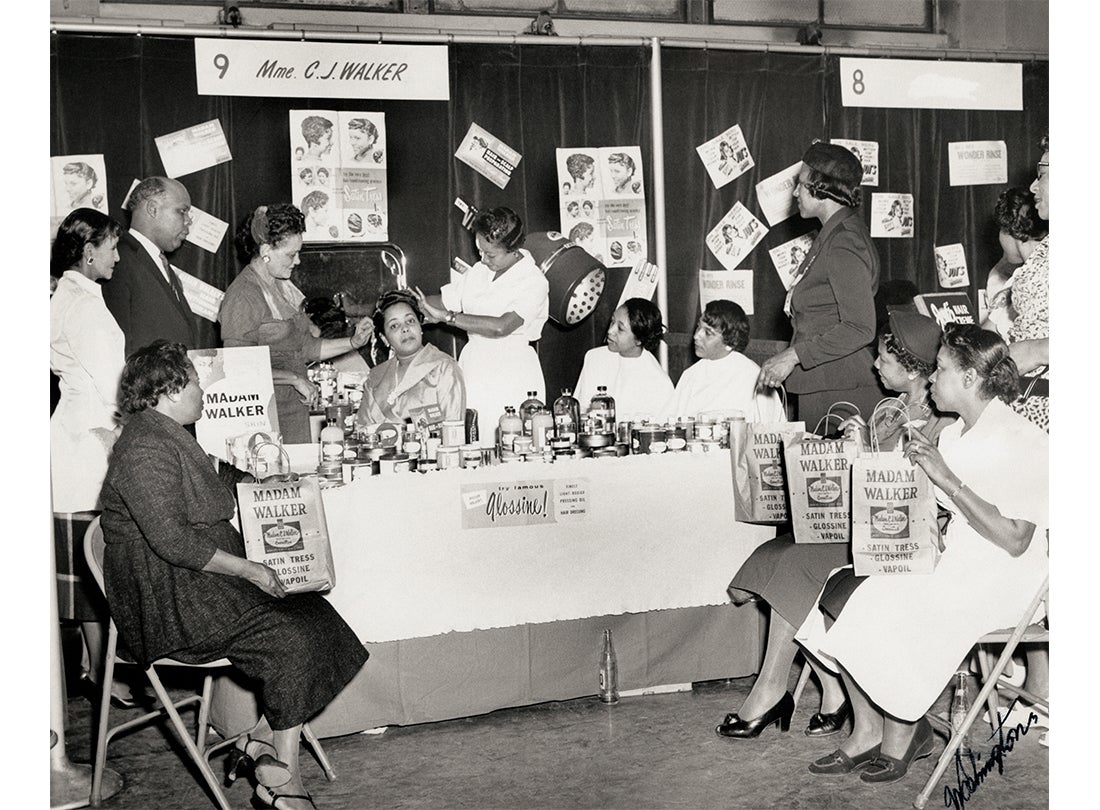 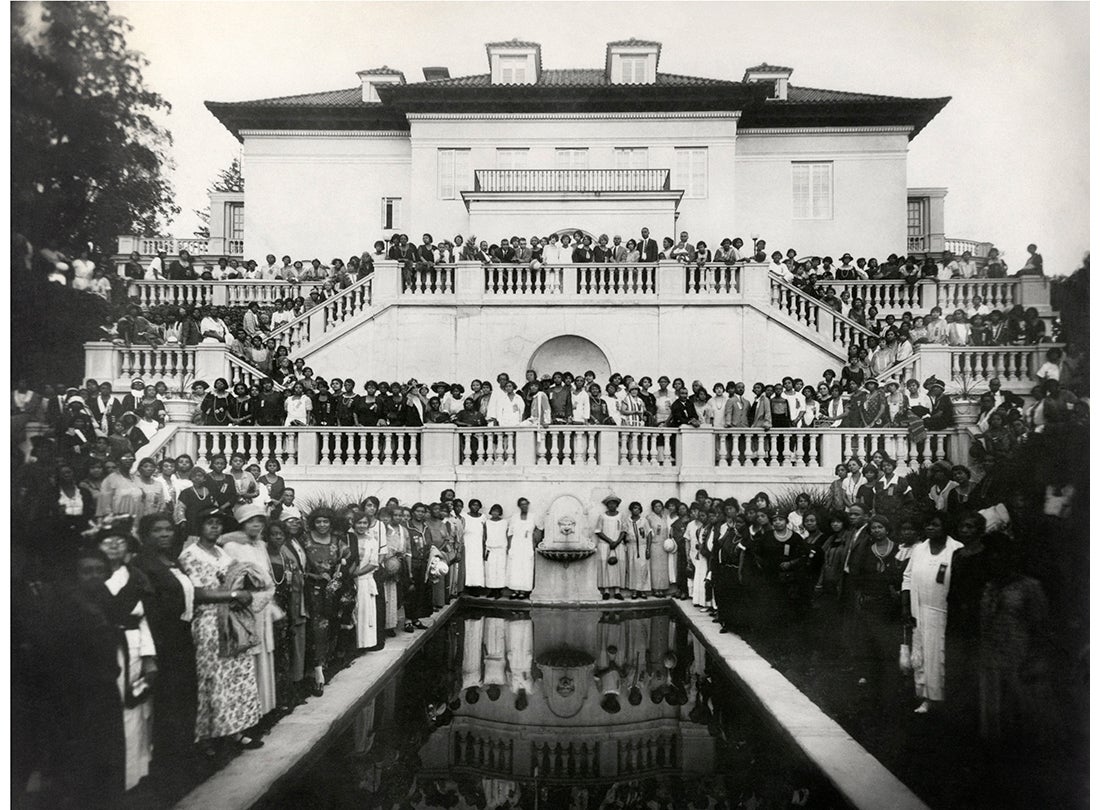 Madam C. J. Walker sits behind the wheel of her Model T Ford. Her niece Anjetta Breedlove, Walker’s bookkeeper Lucy Flint, and her factory forelady Alice Kelly ride along. Madam Walker lacked a formal education. Kelly, a native of Mobile, Alabama, was fluent in Greek, Latin, and French, and served as Walker’s private tutor, assisting her with speech, grammar, penmanship, and etiquette.

Madam C. J. Walker’s daughter A’Lelia Walker and her attorney F. B. Ransom were responsible for erecting the Madam C. J. Walker flat iron building in 1927, eight years after the death of Madam C. J. Walker. In 1928, at the twelfth annual convention of Walker agents, they welcomed agents to the dedication ceremonies. The $350,000-headquarters, one of the grandest built by a Black-owned company at the time, included a theater, drugstore, manufacturing company, beauty shop, ballroom, and offices. The National Historic Landmark remains the only early-twentieth-century building on the 600 block of Indiana Avenue.

Fairy Mae Bryant (1898–1945) was the legally adopted daughter of A’Lelia Walker. Mae’s long, thick hair reached below her waist, making her a perfect candidate to advertise Walker products. She often accompanied Madam C. J. Walker on her nationwide trips, serving as Walker’s assistant and model. She later attended Spelman Seminary, a Black female college in Atlanta, graduating in 1920. After A’Lelia’s death in 1931, Mae became the president of the Madam C. J. Walker Manufacturing Company and remained in that role until her death in 1945.

A’Lelia Walker
A’Lelia Walker (1885–1931) was born Lelia McWilliams in Vicksburg, Mississippi, and grew up in St. Louis, Missouri. Madam C. J. Walker’s only child, she attended Knoxville College in Tennessee in her late teens. She then began assisting her mother with her growing business. In 1913, A’Lelia moved to a townhouse in Harlem and oversaw a Walker salon and training school. After her mother’s death in 1919, she inherited the company and her mother’s newly-built estate, Villa Lewaro. In 1921, A’Lelia sailed alone on a five-month trip to Europe, the Middle East, and Africa. In Addis Ababa, she met Ethiopian Empress Waizeru Zauditu. A’Lelia was a fond patron of the arts, known for throwing lavish parties attended by intellectuals, artists, and writers during the 1920s. Langston Hughes referred to her as the “Joy Goddess of the Harlem Renaissance.” Married three times, she had no biological children. At age forty-six, A’Lelia, like her mother, died as a result of causes triggered by hypertension.

Mae Walker Perry
Born Fairy Mae Bryant, Mae Walker Perry (1898–1945) was the legally adopted daughter of A’Lelia Walker. Mae’s long, thick hair reached below her waist, making her a perfect candidate to advertise Walker products. She often accompanied Madam C. J. Walker on her nationwide trips, serving as Walker’s assistant and model. She later attended Spelman Seminary, a Black female college in Atlanta, graduating in 1920. After A’Lelia’s death in 1931, Mae became the president of the Madam C. J. Walker Manufacturing Company and remained in that role until her death in 1945.

In 1910, Madam C. J. Walker moved to Indianapolis where she purchased a home, which also served as her factory, salon, and company headquarters. While Walker lived in Indianapolis, she employed dozens of individuals at her business and conducted numerous philanthropic efforts to benefit the city. Walker maintained her headquarters in Indianapolis after moving to New York in 1915.

This hair model poses for a Glossine advertisement, a popular product manufactured by Madam C. J. Walker’s company, which promised to add shine and silkiness to the hair.

Alice Burnett
A school teacher from Jackson, Mississippi, Alice Burnett worked for the Madam C. J. Walker Manufacturing Company beginning in the late teens and continued with the company through the 1940s. She was hired to travel around the country to recruit sales agents, give presentations, conduct demonstrations of Walker products, and later, to meet with Walker chapters. After the death of Madam C. J. Walker, she managed the Walker salon and training school in New York.

Marjorie S. Joyner
In 1916, Marjorie S. Joyner (1896–1994) enrolled in Chicago’s A. B. Molar Beauty School, becoming its first Black graduate. She then opened her own salon at age twenty. Having learned to style white hair at Molar, Joyner decided to learn the Madam C. J. Walker method of styling African American hair. After meeting Joyner in Chicago, Walker offered her a position in the company. Joyner recruited new agents, conducted hair styling and product demonstrations, and rose to become the national supervisor for Madam C. J. Walker beauty schools across the country. In 1928, Joyner patented her own permanent wave machine (see patent drawing).

She also styled the hair of celebrities, such as Billie Holiday. In 1935, Joyner became a founding member of the National Council of Negro Women, and in 1946, she founded the United Beauty School Owners and Teacher’s Association (UBSOTA) for Black beauticians.

One of New York’s first licensed African American architects, Vertner Woodson Tandy (1885–1949), designed Villa Lewaro for Madam C. J. Walker in Irvington, New York, nearly twenty miles north of Manhattan where she lived the last couple years of her life. The area was home to some of the wealthiest white Americans in the country, including John D. Rockefeller. The estate, which features a Spanish tile roof and stucco façade, serves as a true testament to all of Madam C. J. Walker’s achievements. It is now a National Historic Landmark and National Trust for Historic Preservation National Treasure. In this photograph, Madam C. J. Walker Beauty Culturists conference attendees congregate around the back terraces and reflecting pool at Villa Lewaro. 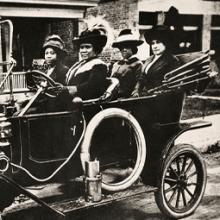 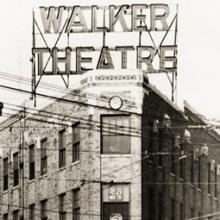 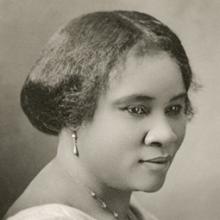 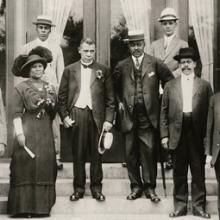 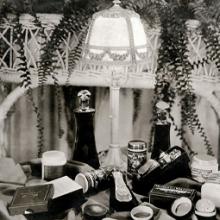 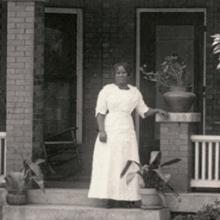 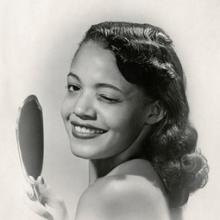 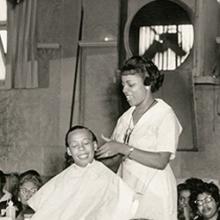 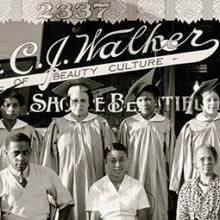 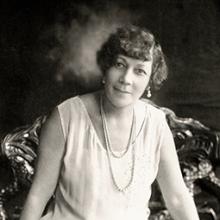 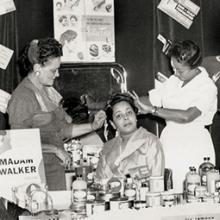 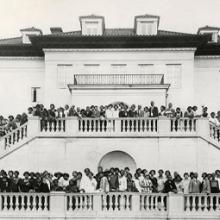